Titanic: The Artifact Exhibition in Singapore

Titanic was completed on the 2nd April 1912
and was at that time the largest ship in the world. 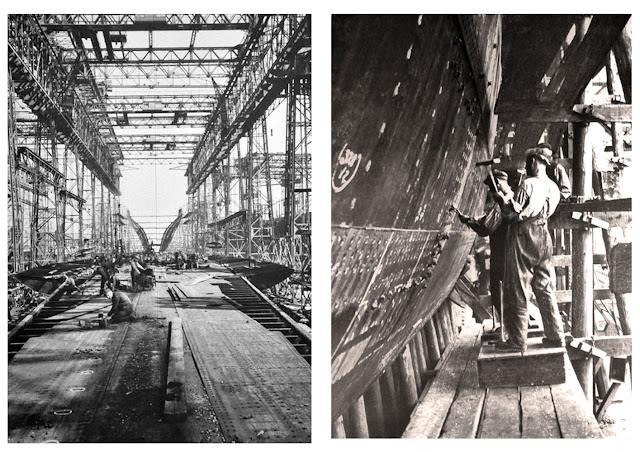 above 'images' from the Titanic: The Artifact Exhibition in Singapore (photo by Leone Fabre) 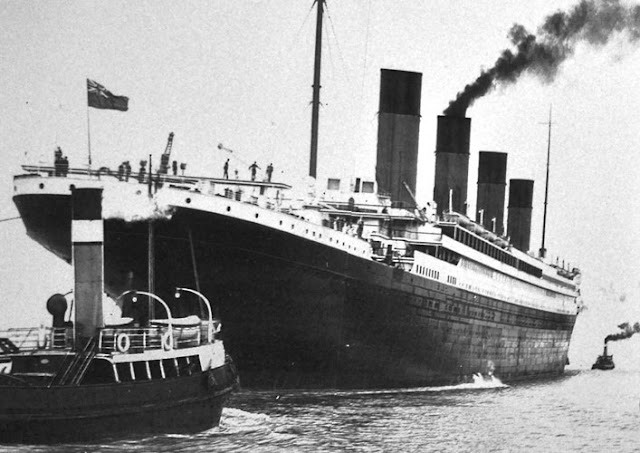 (the above map marks the route of Titanic during her maiden voyage, the ports on that route, and approximate location of where she sank. The remaining portion of her uncompleted route is shown dashed.

This work has been released into the public domain by its author, MechBrowman at the English Wikipedia project. This applies worldwide) 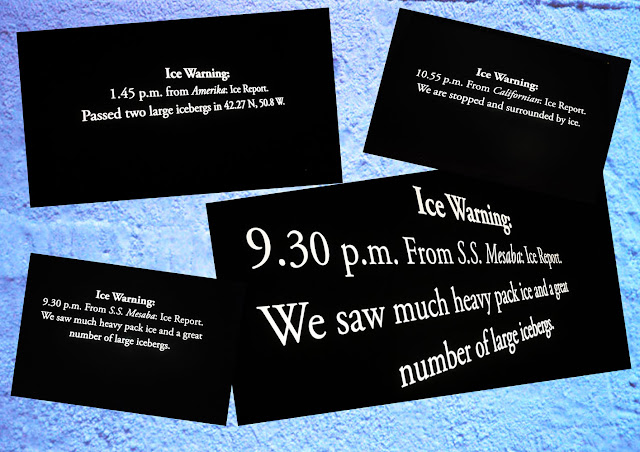 above 'images' from the Titanic: The Artifact Exhibition in Singapore (photo by Leone Fabre)


Despite several Ice-berg warnings she held her speed of 21 knots and on the 14th April she struck an ice-berg at 11:40 PM and at 0:05 AM it became evident that she was going to sink. 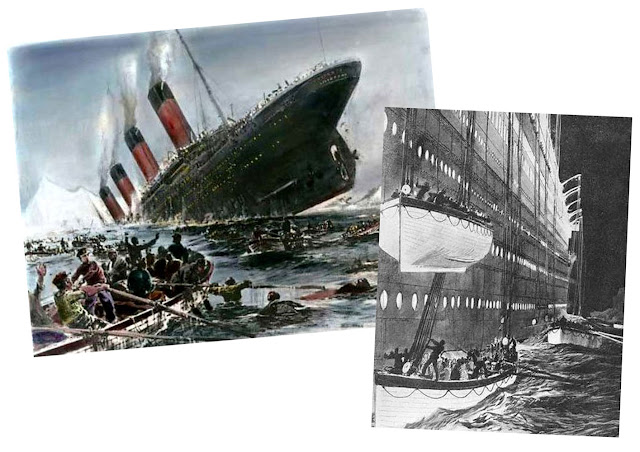 above image on the right: National Maritime Museum, Greenwich,  this artistic work created by the United Kingdom Government is in the public domain.

above image on the left: artist: Willy Stöwer, died on 31st May 1931 *Description: Titanic sinking *License: public domain, copyright expired . This image is in the public domain because its copyright has expired.
The first lifeboat was lowered at 12:45 AM and the last 2:05 AM and she sank at 2:20 AM.
1523 people perished that icy night and 705 was rescued by the Cunard liner Carpathia.
In 1986 Dr Robert Ballard found her 4 km below the water surface.

News of Titanic's sinking reached the world in fragments. Initial reports stated that the steamship Virginian had reached Titanic in time, saving the ship and all aboard.

Soon, however, the horrific truth was known, Titanic was gone.

But has it totally gone? 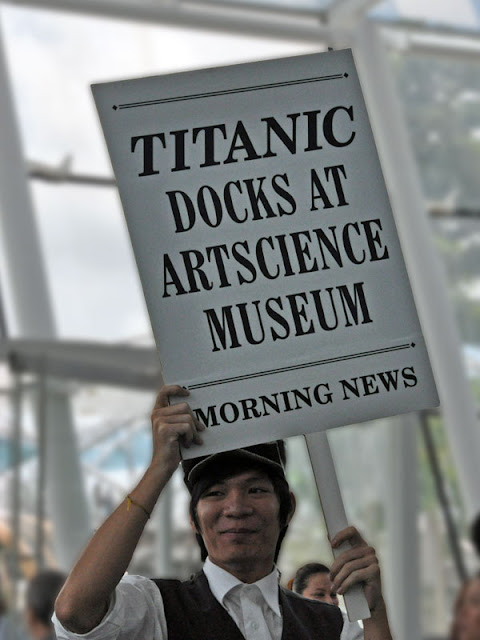 no, definitely not!the RMS Titanic has re surfaced at the ArtScience Museum here in Singapore!!!

In April 1912, the world’s largest Ship set sail with over 2,200 people on board. Four days later, she sank in the middle of the North Atlantic Ocean. Now, nearly 100 years later, the ArtScience Museum at Marina Bay Sands has brought to life the timeless story of RMS Titanic, her passengers and crew in Titanic: The Artifact Exhibition.

We had the privilege of being invited to attend the Exhibition on the day of opening, to meet Captain Smith (as seen below) take in a guided tour and to participate in some letter writing! 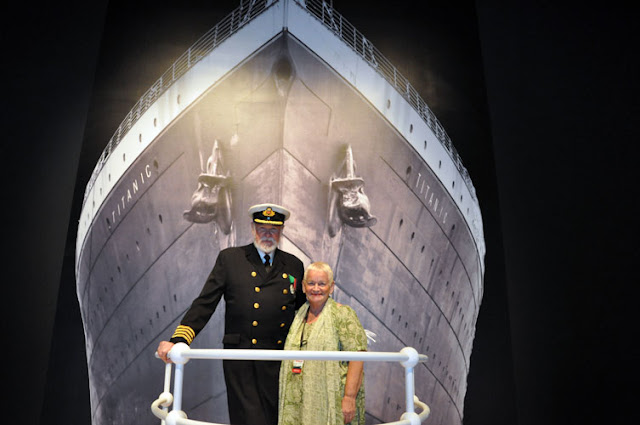 What a wonderful experience! We knew a little about the 'story of the Titanic" as most people do, but we learned much more by attending the exhibition and taking in the guided tour  - which is highly recommended - than we could possibly have gathered from other sources. To be part of the "experience" was in a word, incredible. I am not going to give too much away as it will spoil some of the surprises, but suffice to say, I am sure that you have never attended such an exhibition as this in the past! 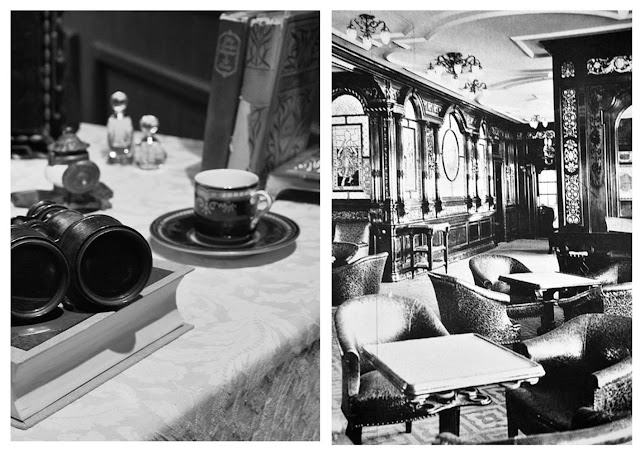 image on left: in the first class cabin, by Leone Fabre
image on right: 'image' from the Titanic: The Artifact Exhibition in Singapore (photo by Leone Fabre)

In the images above, can you imagine yourself sitting down to "High Tea" in the First Calss Lounge on board the RMS Titanic? 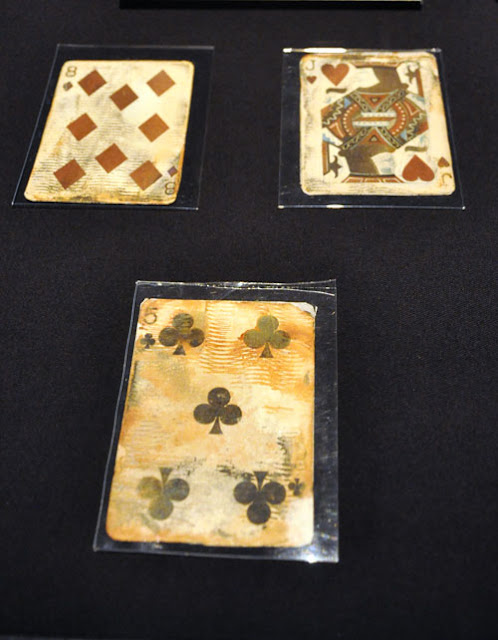 playing cards on display at the Titanic: The Artifact Exhibition in Singapore (photo by Leone Fabre)

perhaps drinking hot chocolate from this silver pot?  Remember, this is in the month of April and it is cold on the North Atlantic ocean! 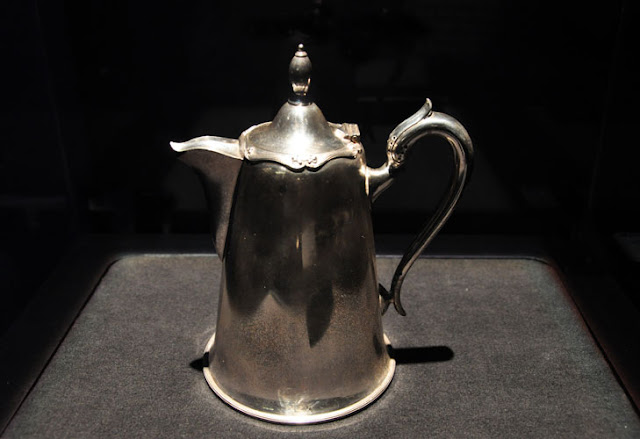 'image' from the Titanic: The Artifact Exhibition in Singapore (photo by Leone Fabre) 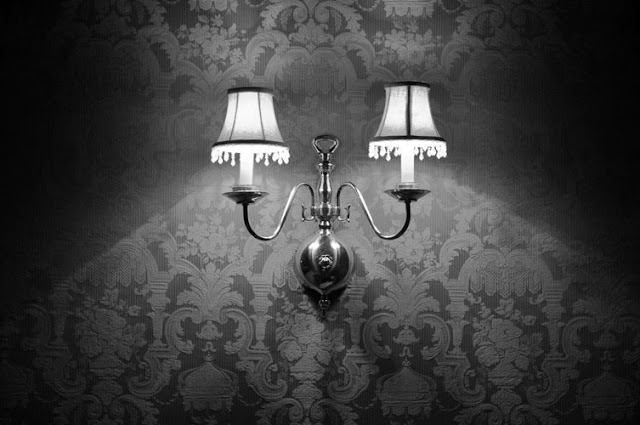 More than 275 artifacts recovered from the Titanic are on display in Singapore until April 2012. The exhibition is showcased at the ArtScience Museum at Marina Bay Sands, featuring 14 artifacts - which have never been displayed before - bringing to life the story of the ship - the world's largest then, her passengers and her crew and also recreates areas of the ship.
Titanic: The Artifact Exhibition happens from October 29 to April 2012 at the ArtScience Museum, Marina Bay Sands.

This exhibition is well worth attending for both adults and children from about 10 years of age. It is also an "experience" not to miss, the exhibition displays a lot of the artifacts found at the wreck site and can be seen in many images on the web. But you cannot 'experience' the complete exhibition unless you attend in person. It is well worth it. I might also suggest you take a guided tour if possible, the guides at the ArtScience Museum are very knowledgeable on every aspect of the Titanic and can tell you stories that you may have not heard in the past and so make the 'experience' of attending the exhibition that much more enjoyable.

I know I will be going again and soon!

Please stay with us as we take you further on the journey of the RMS Titanic in Singapore over the next few days.

We would like to thank Wendy Lim of Marina Bay Sands and the ArtScience Museum for providing us with an afternoon of enjoyment at this amazing Exhibition.
(Leone & John Fabre)

"This blog resulted from an invitation and represents the thoughts and opinions of the writer. All information on this blog is provided "as is", with no guarantee of completeness, accuracy or timeliness and the writer will not be liable for any losses, injuries or damages from the display or use of this information. All text and photos on this blog are the original works of the writer unless stated otherwise."

Love your blog post. It's such an amazing exhibition, I've been once and I would definately go again!