Last night - Saturday September 15 - John and I ventured into Chinatown for dinner......we are now into the Mid-Autumn Festival so it was extra bright and colourful as you can see.

This first photo is of Smith Street and it is one very long street full of tables and seating and many, many food outlets and restaurants: 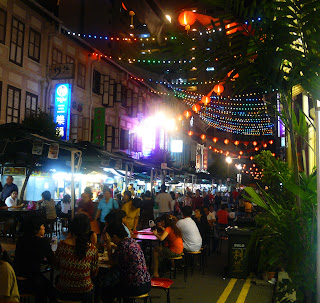 Chinatown and Singapore River will also be transformed with a multitude of lanterns, street lighting and festive bazaars for the Mid-Autumn Festival (8 – 30 September 2007).
The celebration is a Chinese tradition where families and friends gather for reunions, enjoying mooncakes and sipping tea while viewing the moon at its fullest and brightest. This year, Chinatown will become a magical fairyland filled with lanterns and musical fairies. 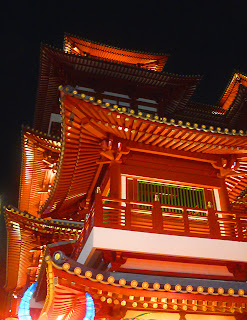 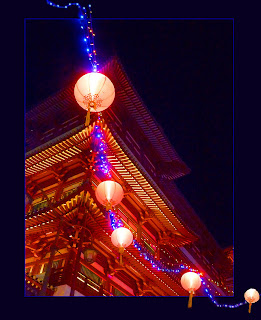 and extra info from the Singapore Tourism Website has:

Originally a full moon celebration of the harvest in ancient China, the Mid-Autumn Moon Cake Festival commemorates China's freedom from Mongolian rule. Feasting and rejoicing resonates throughout Singapore with grand parades, extravagant performances, scrumptious mooncakes and colourful lanterns to light the way. The best places to celebrate are Chinatown, Albert Mall and Orchard Road, around the Singapore River and the Chinese Garden.

Mooncakes (yuek beng) feature throughout the festival and occupy a special place in Chinese hearts. Legend has it that 14th-century Chinese patriots used mooncakes to overthrow the tyrannical Yuan Dynasty by embedding messages in the seemingly sweet delicacy and smuggling them to their allies. The opening ceremony in Chinatown is a sight to behold, with lion and dragon dances, a lantern parade, fireworks, stilt walkers, giant flag bearers and cultural dances. Children show off their paper lanterns against the night sky, adults relax with tea and yuek beng (mooncakes) while elderly Chinese look out for Chang Er and her pet rabbit who, as legend has it, reside on the moon.Along the historic Singapore River, brilliant lights and psychedelic lanterns create a lively backdrop to a lifestyle bazaar.

While soaking up the atmosphere, don't forget to check out the carnival on the river banks. Yummy goodies and novelties are on offer in the open field along Sago Lane and visitors can also enjoy nightly opera performances and daily acrobatic shows.Orchard Road is a great place to savour the delicious mooncake in all its forms. Red bean paste is the most common but new and unique flavours of this mouth-watering delicacy are on offer including preserved ducks eggs, lotus paste, melon seeds and yam.Other festive foods you might come across during the festival include pomelos, a local citrus fruit, and pastries galore. Festival altars are adorned with five dishes of round fruits - apples, peaches etc - as these symbolise the moon, as well as family unity.

We ate at a nice Chinese Restaurant and then wandered around taking in all the sights, so it was a lovely "colourful" evening . John was very tired when we arrived home at 10.30pm and he knew that he had to get up at 4.30am to catch a flight to Korea this morning....