a Cambodian Picnic - part one

am sitting here trying to think about how to (or where to) start on this 'posting' to my blog.

It was such a full day of doing and seeing different things that it is difficult to know where to actually start.....maybe I should call this "part one" which will describe where we are going and what it is about!

Well the first part of the day was getting up at 4.00am to leave by 5.00 so we could watch the sunrise over Angkor Wat, which you can see on the previous posting.... after that we went back to the hotel for breakfast and for the kitchen staff to put together a picnic hamper for us to take to Koulen Mountain where our destination was to be.

The hills beyond Banteay Srei Temple were the original home of much of the sandstone which the ancient Khmers used to build Angkor Wat. Blocks of stone were somehow moved to the temple complex, probably using the Siem Reap River.

Successive kings of Angkor built shrines to appease the gods in the hills, and they had dozens of linga carved into the riverbed, in order to thank the gods for allowing them to carry stone from the hills to Angkor. The carvings at Phnom Koulen are remarkably well preserved and, to see them properly, you need to wade in the river. A walk through the forest takes you to Preah Ang Thom, where a reclining Buddha statue lies on top of a huge natural rock (approximately 50 m high).

From the top of this rock, you can enjoy views out over the surrounding forest and plains. You can also visit a few caves with Buddha statues nearby. A short forest walk takes to you a waterfall, with more impressive stone carvings in the riverbed. This is a popular spot for Khmer people to come and picnic at the weekends.

and on a tourist site I noticed this:

that must mean us!! 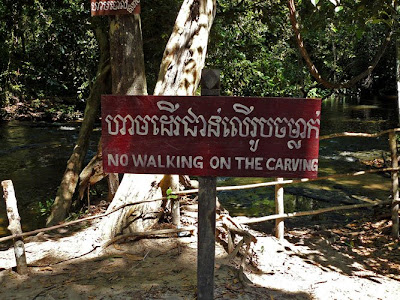 Though I didn't see the above sign till AFTER I walked on the carvings! 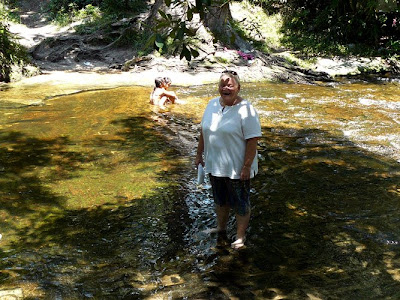 The waters from the spring which feeds the Siem Reap River, wash over the lingas and cascade down to a lovely waterfall. Ancient carvings of Hindu deities and animals dress the stones and hundreds of brightly coloured butterflies complete the scene.

..... and this is why the Cambodian people come here to picnic and lay in the water.... their belief is that the water washes over them and down into the sea bringing them good luck and washing away any troubles.... you will see many photos of them in the water in the next posting as in "part two". 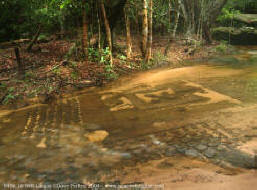 Siva means auspiciousness and linga means a sign or a symbol, Hence the Sivalinga is regarded as a "symbol of the great God of the universe who is all-auspiciousness 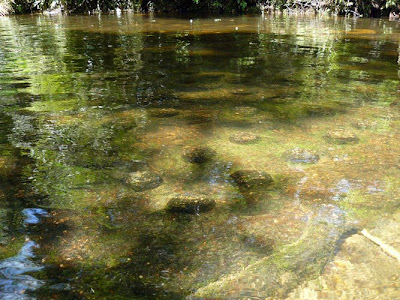 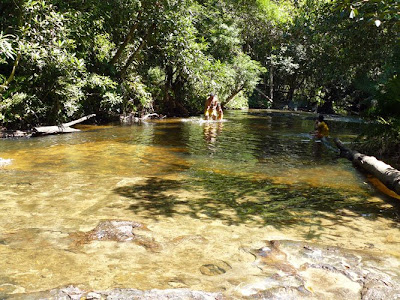 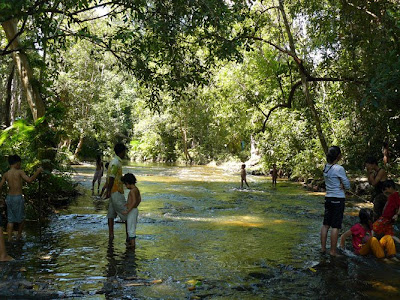 after a bit of a 'paddle' in the holy water we took the path thru the jungle to another area where John decided to drink from the water and of course caught a bug.... he has been quite ill for the past three days. We are told constantly to drink only bottled water, but John thought "one mouthful" would not hurt!! 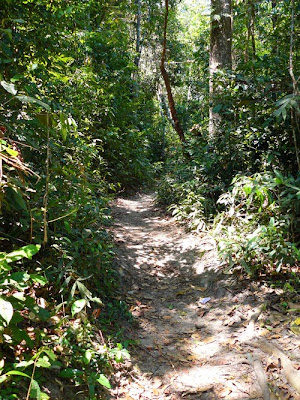 Tread carefully and always stay on the path.
There are still an estimated 1 million landmines in Cambodia 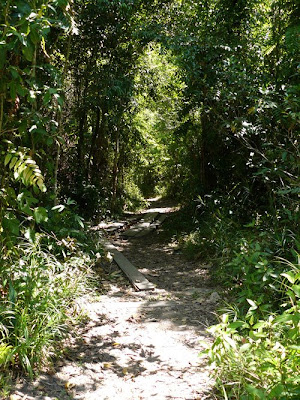 now we start to get our picnic together, though John and I still had ours with us from the hotel, but our driver and guide needed to buy theirs....

There are many stalls around the river and mountain area for people to buy what ever takes their fancy, from fruit ..... 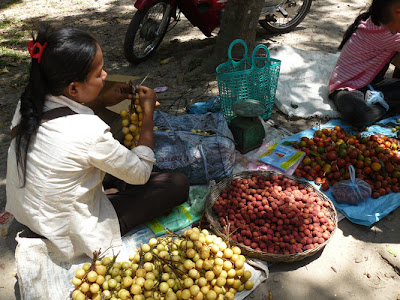 to bananas cooked over hot coals on a piece of guttering! 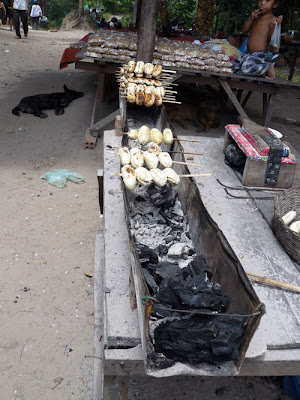 to a FLAT chicken that has been cooked over coals and now held here by Ly Heng our guide... 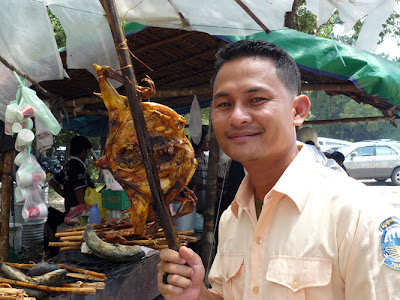 or perhaps a few dried fish? 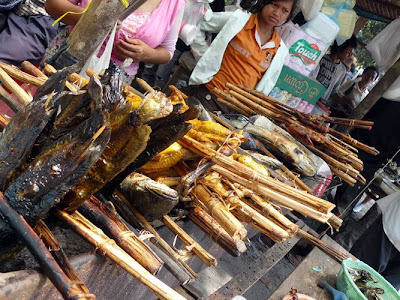 or these two slowly baked over the hot coals? 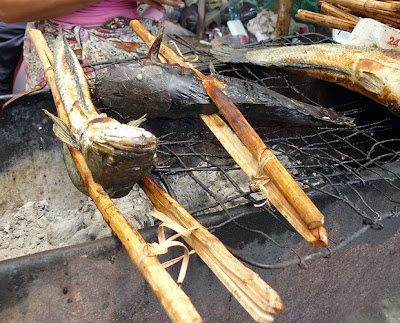 maybe a waffle or two to finish off with? 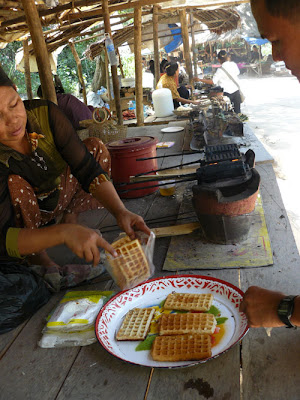 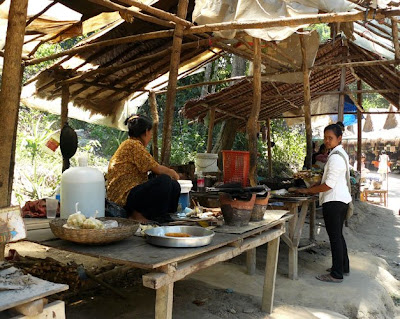 and we are on our way to find a nice quiet spot for our picnic..... 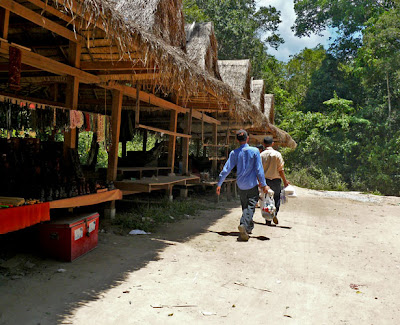 John was VERY brave drinking any water here in Cambodia especially rurally considering houses dont have toilets so both numbers (one and two) are done literally anywhere. Public urination (you very rarely see public defecation thank god!)is also popular in both Siem Reap and here in Phnom Penh even though there are public toilets which are pretty clean by LDC public toilet standards! This not really a country to try street food either (which is sad as we are street food people usually) as hands rarely if ever see soap and the food is often cooked at home then transported and reheated. As I said very brave!

It looks like you had a great time here though I have enjoyed reading your blog which I actually found when we lived in Singapore and have rediscovered. I look forward to hearing about your future adventures too.