SINGAPORE has reported its first patient.......

SINGAPORE has reported its first patient infected with the new A(H1N1) flu strain.

The patient, a 22-year-old Singaporean woman, had been in New York from May 14 to 24, and arrived here on Tuesday morning.

While seated in row 55 on Singapore Airlines flight SQ25, she began to develop a cough, but she passed the thermal scanner at the airport later without being stopped, because she did not have a fever at the time.

Later that morning, she went to a general practitioner who decided to send her to Tan Tock Seng Hospital via the special ambulance service 993 meant for suspected Influenza A (H1N1) cases.

Laboratory test confirmed her infection at midnight on Tuesday. 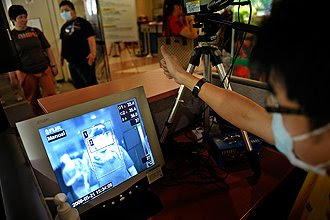 The Health Ministry are requesting all Singaporeans to maintain high standards of personal hygiene.

This means covering your nose and mouth with a tissue when you sneeze or cough, (this is something that Singaporeans find hard to do) and washing your hand frequently with soap and water, especially after contact with respiratory secretions (e.g., after sneezing and coughing).

They add that we also need the cooperation of everyone to be socially responsible. This means staying home and avoiding crowded places (including trains, buses, offices), putting on a surgical mask and seeing a doctor if you have flu symptoms.

So next time you want to pick your nose, spit in the street, sneeze or cough with your mouth open in the train or bus ...... think of the people around you!

Ugh. I was hoping they would be spared. It is widespread here :-(

Oh NO!! I hadn't heard. we no longer have cable, so I don't always catch the local new....very scary stuff!

Pam, I don't watch TV, but read all my news on-line, from 'home' or from Singapore!