When I first started this blog two and a half years ago, my idea was to capture the following:

"my thoughts and feelings about my life whilst living in Singapore, what we have seen, the places we have been to, what we have done and the people we have met"

But it seems to be more about where we have been and what we have done rather than "my thoughts and feelings" of being here in Singapore!

So here are my 'thoughts' on just a few of the cultural differences:

First off, gotta say I do not like people pushing and shoving to get on the train first, or on the bus first, or on the ferry first ...... they just seem to be a bunch of inconsiderate individuals who are only thinking of themselves, no matter what, they have to be first on first off. .. or get to the seat first!

Now I do not like it, not one little bit ..... at first I used to be very vocal and tell people to please wait till we get off, even letting them know how rude they are.......

But wait - are they rude or just ignorant?

(Ignorance is the state in which one lacks knowledge, is unaware of something or chooses to subjectively ignore information)

Yes, they are being rude by my standards.

and yes, probably being rude by the standards of many people and lot of us believe they are also not acting "well mannered".

But in my home country I can tell you there are a lot of rude and ignorant people there too, they will push and shove with the best of them and I wont even start on the "road rage" subject!

Have given these behavioral differences a lot of thought (and after all of those thoughts - I still don't like it) but starting to accept these differences of the local population.

We - as expats - are here as "guests", so we are the ones that have to accept what is happening around us and start to have some understanding of the cultural differences.

Otherwise we are the ones that are going to
have a very unhappy time while we are here.

It is not up to us to tell the local people how to behave in their own country. 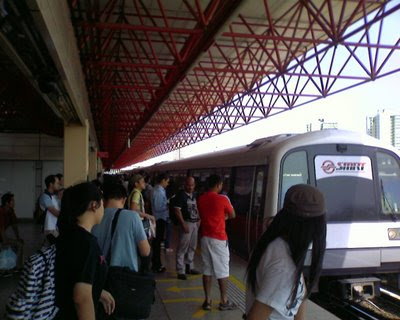 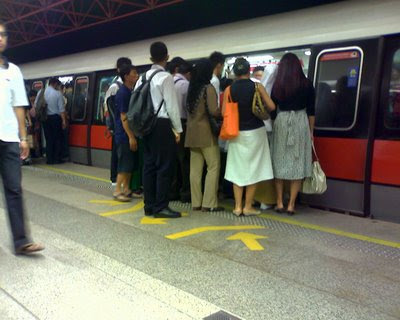 
No one can tell me there is a country anywhere in the world that is PERFECT , there are people elsewhere that will also push and shove or speak rude or spit or are bad mannered. It all depends on what effects you or how you react to it. What you accept might not be what I would accept.

We cannot just say "everyone here is so rude" because they are not. Some people may behave different to how you would expect them to in your country or places you have lived.

This is all part of the cultural difference's.

If you - as an expat - expected it to be the same as where you call home, you may as well have 'stayed home' as you are not open to learning about a new culture.

On some of the expat forums, you can read what people say about the "rude Singaporeans" on a daily basis:

MRT crowds, there is no give way, no queuing, people just crash in as soon the door opens, without letting people getting off first.

And people don't move into the centre of the train, all cramped around the doorway, so poeple can't get on to the train and when you ask people Politely to move, they'll just pretend they either don't know your existence, dont hear you, or simply just ignore.

Used to be so MAD about this, later on, found out, oh well, there isn't much you can do. Either you say *excuse me* and push yourself in to try to give people behind you more space to come into the train, or, you somehow become one of them, just well pretend it doesn't bother you, and that's what everyone does anyway.

The crowds getting on the MRT is a good one. Similarly, people getting onto elevators are annoying. Also when I am waiting for a bus and the bus pulls up in front of me, why is that other's who are waiting behind me think it is OK to push in front of me to get in the door? It's only common courtesy that the person closest to the door gets on first.

For a nation that, in some people's opinions, is good a queuing I am shocked at the impatience on display.

I am still adjusting to this.


...... and yes, I am still adjusting to this after 28 months of living here. I am just trying to have a better understanding of the people around me, the people I meet daily, the people that are part of my community while I am here.

If I am to enjoy the time that I am here in Singapore it is me that has to make some changes, be it acceptance and understanding or standing back to let them all jump in ahead of me.

Not the local people.

Maybe we can show by example - to always be polite and well mannered?

It would be really nice if they could change some habits that I don't particularly like, but it is not up to me to make that happen.


it is not up to us either to be angry or to fester the situation
by telling others about how rude everyone is.

To live in harmony and have a peaceful life
is to have more understanding of community around you.

stand in their shoes for one day
and see if you still feel the same way at the end of that day.

I still don't like rude people though
regardless of where they come from or where they live!
May 2011:
well it is now two years later and I do notice that some things have changed, not everything, but some. The most noticable being there is less shoving "to be on the train first", the bus is OK, but certainly not the ferry situation. That has got worse if anything. I truly have no idea WHY they feel the need to be on first (maybe to get the better seat??) but to push and shove to get on the ferry is downright dangerous.
Service in most stores - or lack of - has not changed, the sales person will ignore you if a 'better looking customer comes along' by that I mean a 'fatter wallet'!!
If you are being served by the sales person, another customer will come along and rudely push in front and ask a question about items in the store.  Wait a minute .... one person at a time PLEASE!
so some things have changed in the past two years and some have not.
.... and I was at Tekka Market yesterday ..... I was at one store and the three staff were sitting there, in the store, on the floor eating their lunch. They were Indians and were eating from the paper wrapped food with their hands.  I didn't think anything of it, but could see it was their lunch break, so I sat on the chair and waited.
The lady said to me: "You must think this is a terrible way to eat, you would never eat like this so it must look really awful for you"
My reply to her was " No, It does not bother me at all, I don't think it rude or awful"
She then added.... "but you don't eat with your hands"
"No, I don't, well yes, sometimes, it will depend on what I am eating .... but it is not wrong to me, it is different to what I would do but that does not make it wrong... so please finish your lunch ... I am not bothered about you eating and I don't mind waiting".
I actually felt sad to think she had to apologise to me for her 'normal way of eating'. Do we (as Westerners) make them feel that way?

We - as expats - are here as "guests", so we are the ones that have to accept what is happening around us and start to have some understanding of the cultural differences.

Otherwise we are the ones that are going to
have a very unhappy time while we are here.

It is not up to us to tell the local people how to behave in their own country.

To live in harmony and have a peaceful life
is to have more understanding of community around you.

I agree.....I do not like rude people at all!!! When I'm with Juliana & the stroller, it's a pain when everyone is shoving. But people are rude, regardless of where you live. I also felt the same way about wanting to live outside of my norm, with the locals. I was with Americans at home...we wanted to experience Singapore!!! Good post.

Yes, every country in the world has rude people and whether it is thoughtlessness or sheer bad manners, it is definitely annoying. My theory is if I try to show manners and respect and even one person catches on, maybe more and more people will follow suit. I am going to die trying anyway.

Yeap, Singaporeans are rude... no excuse. Once I returned to Singapore for a short trip, and I was driving. I stopped and let a car exit (a norm in the place I live now), the car behind me horned at me, and the driver in the car that I gave way to got a shock. This is rude, but it's ingrain inside them. It's really hard to change. I thought of changing this habit by being more courteous myself but when I visited Shanghai and took its subway.... my goodness.... a pretty lady can basically shove a man aside... the funniest part... she will give you a smile after shoving you aside... that's a phenomenon Singaporeans call Kiasu... scare to lose. Have to change... if not it'll be an extremely stressful society to live in.

hello friend, we need more time to change to a more gracious society

I am educating my kids to change the World tomorrow (I hope) haha.

(Japan and Taiwan can be our graciousness-benchmark)