don't sing in your swimming costume

I have often thought about the etiquette of tourists traveling overseas and wonder why some people don't do their homework and read about the local culture or the laws of the country they are traveling to BEFORE leaving home!

I do not know the laws, rules, regulations, customs and culture of many countries, but I do know to read a little of the culture of where I am traveling to so as not to offend.

For example, I often see young women dressed inappropriately while wandering around the Arab Quarters for instance.... I am not conservative nor am I a prude...... but surely visitors would know to cover their shoulders at least when in this area.

As seen in this image below: 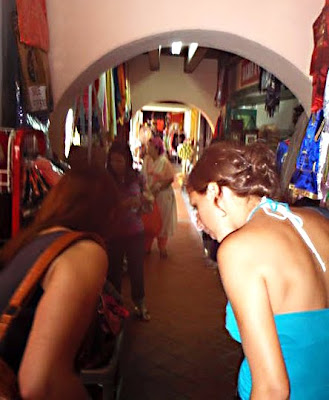 But it was brought to my attention a day or so ago when I came across an article titled:

""Guide to holidaymakers: don't sing in your swimming costume""

Singing whilst wearing a swimming costume and carrying an ice cream cone in a back pocket on a Sunday are just two foreign laws of which British holidaymakers should be wary, according to a new guide!!

Other prohibitions they cite in the article included laws against unmarried women parachuting on a Sunday and flushing the lavatory after 10pm, according to the travellers' compendium.

It comes after a string of cases involving holidaymakers getting arrested abroad. In May an Australian mother was arrested for stealing a beer coaster from a nightclub in Thailand. (It was more like a large place mat!)

Last year two Britons were convicted of indecency after being caught having sex on a beach in Dubai. They were initially given three-month jail terms but these were suspended on appeal.
In April visitors to Malaysia were warned they face up to a year in jail if they behaved too affectionately in public after a local couple were arrested for holding hands and kissing.

Sunshine.co.uk, an online travel agent, said it had seen an "influx of inquiries" from worried holidaymakers about the rules and regulations of their chosen destination.

A spokeswoman said: "Aside from the more serious rules, such as showing affection to a non-marital partner in public or walking around in swimwear in Dubai, there are many outdated rules around the world that people should be aware of."

Here is the list of examples of which they say holidaymakers should be aware:

In Milan it is a legal requirement to smile at all times, except during funerals or hospital visits.

In Massachusetts, taxi drivers are prohibited from making love in the front seat of the car during their shifts.

In Denmark, people are legally obliged to honk the horn and check for small children underneath the car.

In Thailand, it is illegal for anyone to leave a building without wearing their pants.

In Michigan, anyone planning on bathing in public must have their swim suit inspected by a police officer.

In Florida, any unmarried woman who parachutes on a Sunday could be jailed. Singing while wearing a swimming costume is also prohibited.

In Portugal it is unlawful to urinate in the sea.

In Hong Kong the wife of a husband who commits adultery is legally entitled to kill the mistress in any manner desired, and the husband with just her bare hands. uh oh!

In Switzerland flushing the lavatory after 10pm is illegal.

In Canada if you are arrested and then released from prison, it is a legal requirement that the felon is given a handgun with bullets and a horse, so they can ride safely out of the town.

I checked the Australian website for travelers and came across the following:

When you are in Singapore, be aware that local laws and penalties, including ones that appear harsh by Australian standards, do apply to you. If you are arrested or jailed, the Australian Government will do what it can to help you but we can't get you out of trouble or out of jail.

Information on what Australian consular officers can and cannot do to help Australians in trouble overseas is available from the Consular Services Charter.

Corporal punishment (including the rattan cane) may be imposed for crimes including drug offences, rape, rioting, extortion and vandalism.

Homosexual acts, including kissing between men, are illegal in Singapore and penalties include imprisonment.

Shoplifting and theft are considered serious offences in Singapore. Australians visiting Singapore and transiting Changi airport have received jail sentences for such offences. Shopping centres, including at Changi airport, have sophisticated surveillance equipment to prevent shoplifting.

a Singaporean wrote the following on a local forum:

"Singapore has a reputation for its rules and regulations. There are posters displayed prominently around the place telling people what to do and what not to do.
There is a need for some, I believe, so that it is clear what is forbidden, such as not eating or smoking on the trains.

However, the Singapore government have taken this one step further and have issued posters on matters that any person with a decent upbringing would not need reminding about.
I don't really need to be told how to use a public toilet, that I must keep it clean and flush after use or that I should not urinate in lifts.

If you are someone that likes to break the rules then watch out because there are stiff fines involved for doing so. Just act like a decent person showing respect to other people and public places and you will not have a problem."

and another wrote this one:

"As a Singaporean, I am used to living in a clean, safe and orderly society where rules and regulations prevail. It is because of the existence of these rules and their enforcement by incorruptible officials that Singapore is among the safest cities in the world.
The tourist in Singapore does not have to worry about pickpockets that roam the streets of Rome and Barcelona, the hell drivers in Shanghai, and violent crimes in big cities in the US. It is perfectly safe to take the subway and to walk in the streets at night. "

Standards of behaviour in Singapore are (to some people) generally conservative. You should take care not to offend. If in doubt, seek local advice.

eg: Public displays of affection may cause offence.

I have had people ask me "what is it like to live in such a controlled country" .... I never think of it like that .... I am very lucky to be able to live here and experience so many cultures living together harmoniously. I certainly would not have that if I stayed in Australia!

We all know the rules .... so why go against them?

The laws here are for the benefit of us all. We can feel safe and we can walk around the streets at night without fear.

If we 'break the law' then we are punished.

if we abide by the laws and customs and have the understanding of them too, we can then all live together in harmony. If we have respect for each other, then it can only be good.

But it certainly is worth having a little extra knowledge when we are traveling overseas or even local. We all like to plan ahead, choose events and choose places of interest when we are to go on holidays, we should include checking some of the articles on culture, customs, laws and regulations too.

Some of the following may help if you are traveling in this area:

Great post Leone. I never feel like we live in a controlled city. Personally, like the Singaporean blogger said - if we all behave the way any decent person should then there shouldn't be a problem.

The UK is on its knees at the moment with offenders' rights being more important than the victims', school teachers who now have no power or control and public transport that I'd never dream of using at night.

I lovvveeee your posting! There are always two faces to a coin, two sides of the story.... and two hands to clap. 99% of the people are decent and law abiding... but those harsh laws and tough enforcement are for the 1%. 1% of the world population can make the world goes upside down. The mortgage crisis.... terrorism..... banking crisis.... war... it's always feel so bad that 1% of the tourists help develop a stereotype for the other 99%!