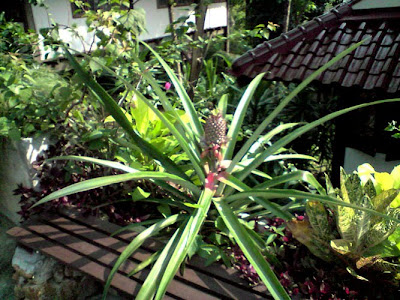 This morning - at Batam - I was opening the lounge windows and looked across to our neighbour's villa and saw five monkey's on their balcony. Mamma, Pappa and the three baby's. At this point I did not realise they were in fact "the three wise monkeys".

I saw them run into R's kitchen and started making a bit of a racket ....... but assumed that he was at home and would deal with them. Then they started walking along the pathway and coming down to our garden, again I was not that concerned as they don't bother us. Except mamma monkey spotted the pineapples I have growing and called the whole family!

That's when I got cross.

I yelled at them to no avail.

John went out and off they ran...... up into the tree's, waiting. Five minutes later they sneak back down and started pulling at the pineapples so I know there won't be any left by the time I go back next weekend.

You can see here in the following image where they have taken the top out of the pineapple: 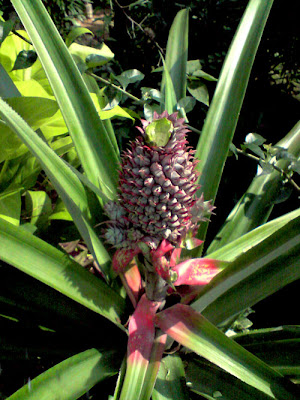 We started out on our walk, but only went a short distance when I asked John to run back and get a bottle of water to take with us.

Just as well he did, as he opened the front door he saw the monkeys on our balcony and in our kitchen. We never leave food out and it was not an issue really, so he shooed them out. By the time he walked up the pathway and looked back to the kitchen, there they were sitting on the kitchen bench eating one of my Energy Bar's!

Now they were IN a sealed contained with a lid and of course also in their own packaging. But these cheeky monkeys managed to open the tupperware lid and get to the bar's. But the cheeky way they were pointedly showing John that they were eating in our kitchen was amazing.

At least they did not do any 'damage'.... John spoke with our neighbor who told him that when the monkeys were in his kitchen they undid the lid on the bottle of oil and drank from it .... then obviously did not like the taste so threw it on the floor!!!

When the population of monkeys become too great in the village, the office set traps to collect them and set them free back in to the jungle area's....... the traps are about one metre diameter and a trap door at one end. At the other end they tie a banana on string to entice them into the trap.... BUT....

they climb up on top, put their hands down by the string and gradually haul the banana back up to the edge of the wire, pull it through and proceed to eat it. 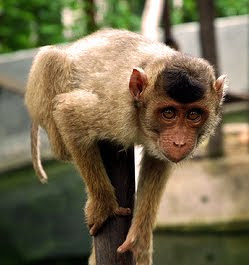 Oh Man! This was certainly worth waiting for! Those little rascals are smart aren't they? What a cute picture. Sorry about your pineapples - they will surely be history. It doesn't sound like the traps will do the job - they are clever little rascals.

Thanks for sharing your wonderful tale - I had my giggle for the morning!

I saw when you came on (Thibodaux, Louisiana) ..... knew you would have a bit of a giggle!