When you first enter St Peter's Basilica, nothing will prepare you for the sheer size and grandeur of what you are about to experience. It will take more than 'just a quick visit' to take in the monuments, the altars, the statues, the ceilings and everything else that is in St Peter's.
We visited there on March 29 and very lucky to be able to have a second visit there on April 9 when we spent at least another three hours wandering around. 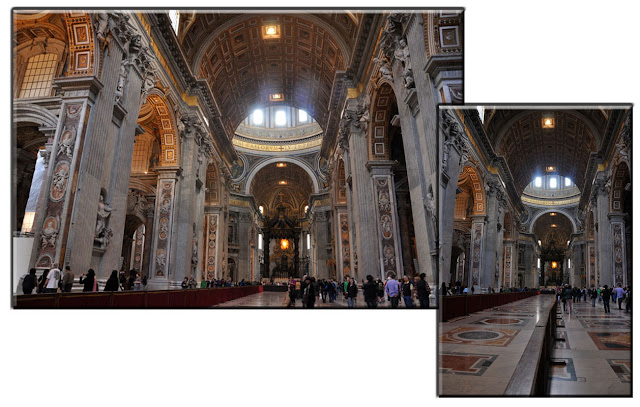 This grandiose sculpture monument was created to enclose the wooden throne of St Peter. The four gigantic statues of Doctors of the Church are: St. Ambrose, St. Anthanasius; St. John Chrysostom, and St. Augustine.

The fine alabaster window shows the Holy Spirit as a dove. 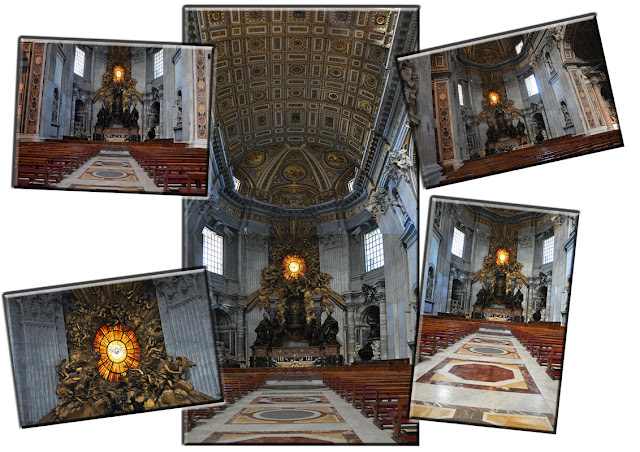 St. Helen was the mother of Constantine. She converted to Christianity and performed many acts of charity, including building churches in Rome and in the Holy Land. Legend has it that on a pilgrimage to the Holy Land, St. Helen discovered the True Cross. 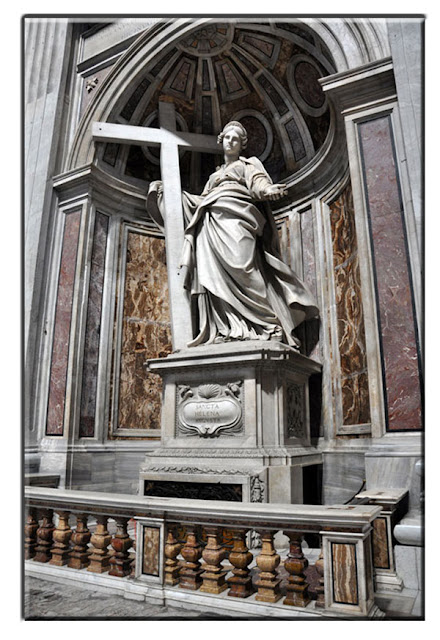 Daily masses are held in the left transept (as seen below) at the central altar dedicated to St. Joseph. The schedule is posted at the entrance to the Sacristy. On the left side is the Altar of the Crucifixion of St. Peter, thought to be nearest the spot where the Apostle died in the Circus of Nero. 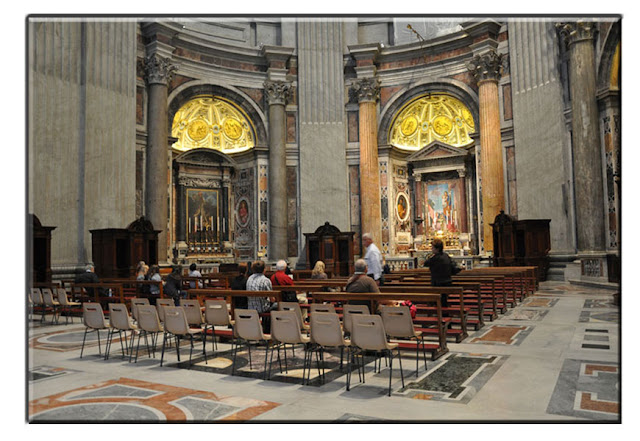 The Chapel of the Pieta ..... This is probably the world's most famous sculpture of a religious subject. Michelangelo carved it when he was 24 years old, and it is the only one he ever signed. The beauty of its lines and expression leaves a lasting impression  on everyone. 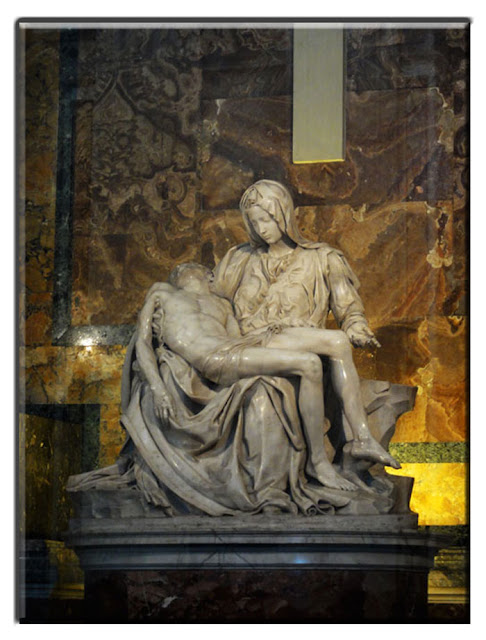 Below is the monument to Alexander V11....... This, one of the most famous papal monuments in St. Peter's, is the masterpiece of the 80-year old Bernini. The door under the monument leads to an exit of the basilica. Alexander VII was the pope who commissioned Bernini to enclose St. Peter's Square with the colonnade. 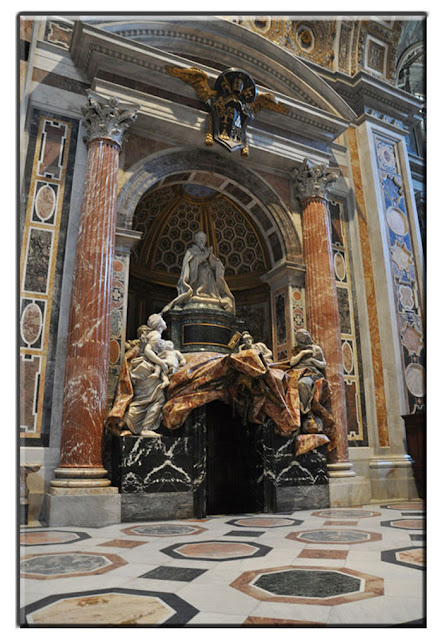 below is the Altar of St Gregory the Great. Beneath the altar lies a white marble sarcophagus containing the relics of Pope St. Gregory the Great (590-604), Doctor of the Church. He was the first Pope to adopt the title "servant of the servants of God."
The mosaic altarpiece representing The Miracle of St. Gregory dates from 1772. It was inspired from an original painting by Andrea Sacchi dated 1627. Here the Holy Pope is depicted in the act of cutting a linen cloth that had been on St. Peter's tomb which suddenly bled. 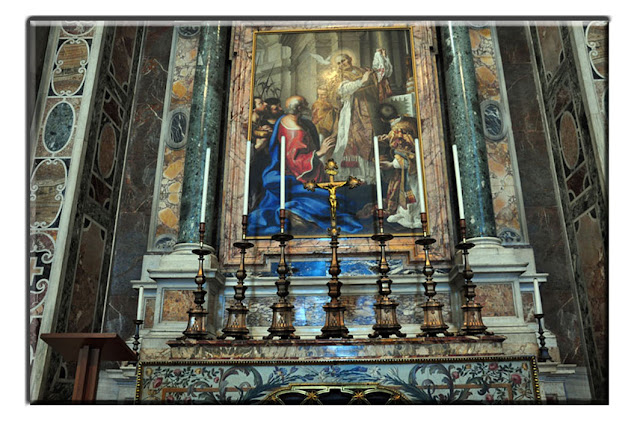 below is the statue of St Peter
On this ancient bronze statue, St. Peter has his right toes worn down by centuries of pilgrims who traditionally touch the foot. 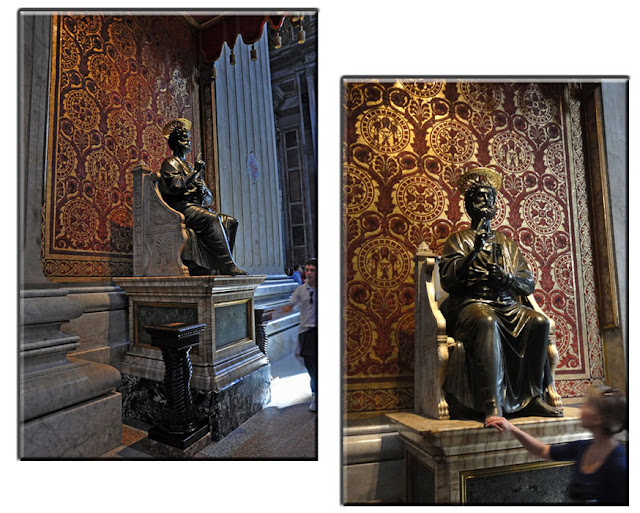 below is the monument to Pius V111
The Pope is show kneeling, accompanied by a statue of Christ enthroned, with statues of Sts. Peter and Paul. The allegories are Prudence and Justice. He was imprisoned in 1808 during the French domination of Italy for refusing to take the oath of allegiance to Napoleon. 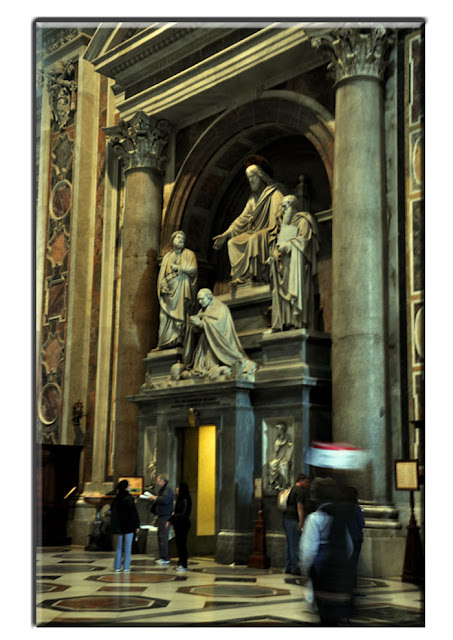 there really is a lot to absorb on a visit to St Peter's, even to blog about it is overwhelming.
stay tuned for further blog posts on St Peter's

my other blog posts on Rome are:
1. arriving in Civitavecchia
2. the Colosseum
3. the Trevi Fountain
4. from Civitavecchia to Rome by bus and train
5. people watching in Rome
6. our first sighting of St Peter's Basilica
+ + + + + +