Bali is truly a unique isle; from its timeless traditions, colourful pageantry to rites of passage. The people possess a genuine sense inner happiness that is perhaps attributed to the strong Hindu faith. There is a fundamental belief in the spiritual world which should always be in balance and harmonize with the physical world to attain peace and prosperity. 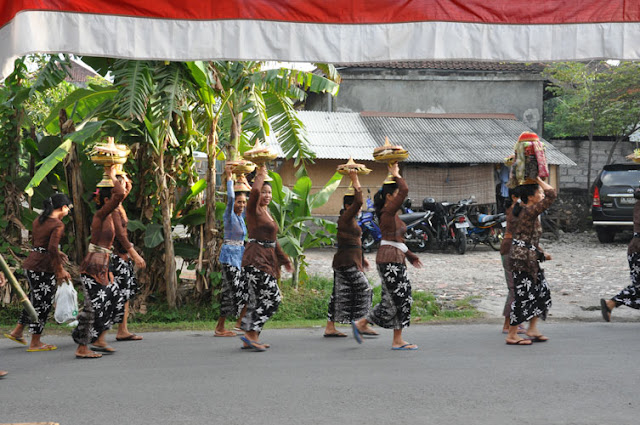 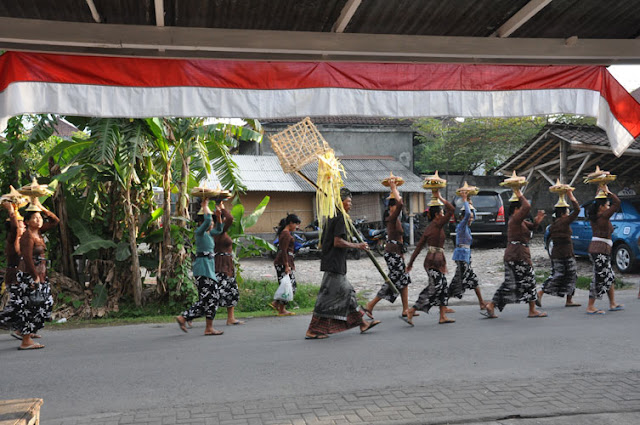 On one of our morning walks in Bali we saw what we thought was a 'festival' with women carrying flowers and adornments of all kinds.  It was not till the 'wrapped body of the deaceased' was close to me did I realise I was actually witnessing a funeral walk. Needless to say, once I realised this I put the camera down. 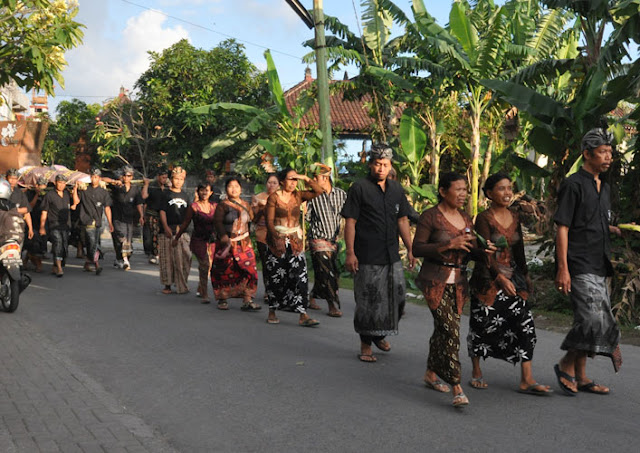 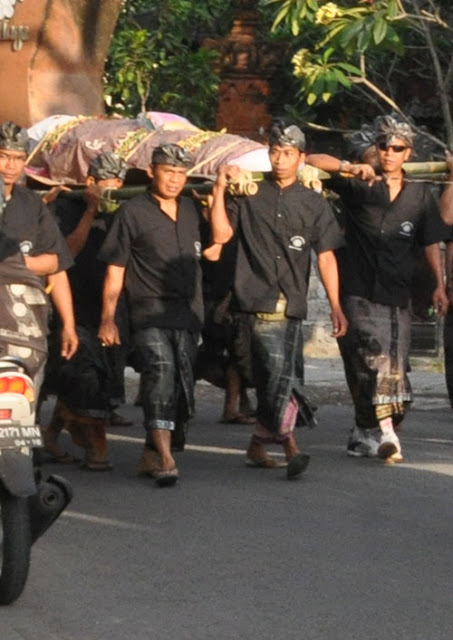 There is one thing that is certain in this lifetime: eventually we all must die. A belief in the cyclical reincarnation of the soul is one of the foundations of the Hindu religion. Death is viewed as a natural aspect of life, and there are numerous epic tales, sacred scriptures, and vedic guidance that describe the reason for death's existence, the rituals that should be performed surrounding it, and the many possible destinations of the soul after departure from its earthly existence. While the ultimate goal is to transcend the need to return to life on earth, all Hindus believe they will be reborn into a future that is based primarily on their past thoughts and actions.

I knew very little of the rituals of the Hindu faith and so 'googled' for further information:


Cremation is a ritual designed to do much more than dispose of the body; it is intended to release the soul from its earthly existence. "Hindus believe that cremation (compared to burial or outside disintegration) is most spiritually beneficial to the departed soul." This is based on the belief that the "astral body" will linger "as long as the physical body remains visible." If the body is not cremated, "the soul remains nearby for days or months"The only bodies that are not generally burned are unnamed babies and the lowliest of castes, who are returned to the earth.

The standard cremation ceremony begins with the ritual cleansing, dressing and adorning of the body. The body is then carried to the cremation ground as prayers are chanted to Yama, invoking his aid.

I recently saw an image of a Balinese Hindu funeral (seen here) where the photographer attached the following note:
One of the most spectacular ceremonies in Bali is probably the cremation ceremony. In Balinese this ceremony is called Ngaben. Of course, like any ceremony in Bali, the cremation ceremony's size and spectacle depends on the importance of the deceased, and the money spend. While the poorest of the Balinese are buried, and finally cremated in group cremations, the people with some more money to spend are cremated right away. One thing is for sure, the body needs to be burned to set the soul free from worldly ties, and to start a new life in a world that is supposed to be as beautiful as Bali itself.When the body of the deceased is carried to the place where the cremation is to take place, the often very beautiful and colorful temple-like structure called Wadah with the body is shaken and turned by the people carrying it, to make sure the soul doesn't find its way back  home.I panographed this, relative simple, cremation on Sanur Beach. During the cremation I heard people say, that the deceased was 61 years old, and died because of stress.

Other blog posts on our visit to Bali are:
Flying Garuda from Singapore to Bali
walking to the bakery
the dogs of Bali
such peace and quiet!
sunset on the beach
watching the rice grow