witnessing the Akad Nikah of a Malay Wedding.

I was visiting the Sultan Mosque in Singapore recently and - by chance - was there to witness the Akad Nikah (solemnization) of a Malay Wedding.

The Mosque is a prominent landmark in the Kampong Glam Malay Heritage District. The district is a show-case for tourists to learn, understand the religion, culture and the diverse ethnic group that  make up the Muslim Singaporeans today.
I was over joyed to be able to witness such a special and emotional event. 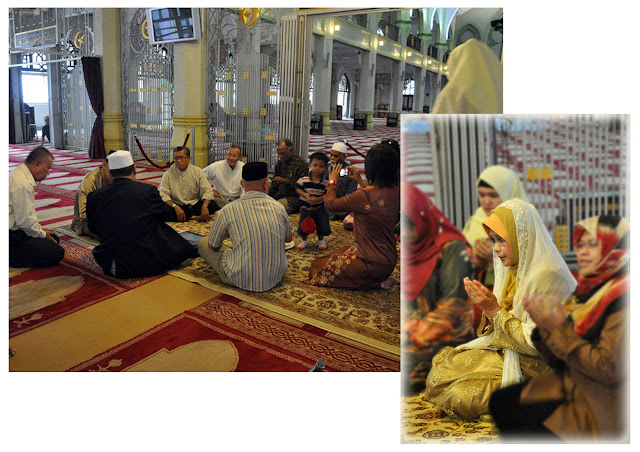 The Malay wedding can clearly be divided into 3 main segments:

The Betrothal process begins with a meeting between a representative of the groom and the parents of the girl to discuss the marriage proposal.  If the proposal is accepted, the discussion will proceed with the value of the dowry, the venue and the date of the wedding are discussed.  This could happen as early as a year in advance.

The ‘Akad Nikah’ or solemnization ceremony is held on the eve of the wedding day at the bride’s home, in the mosque or at the Registry of Muslim Marriages or ROMM. 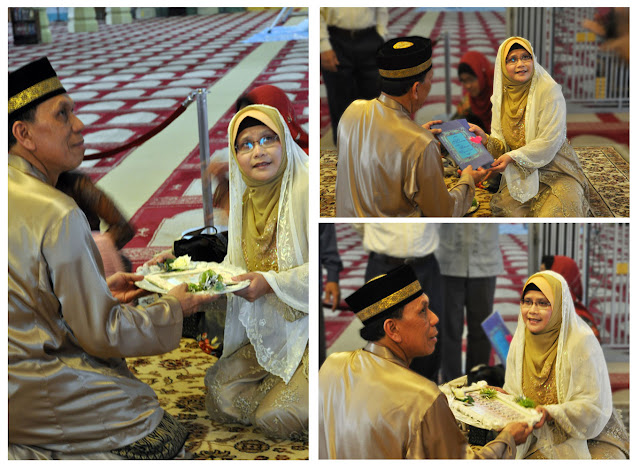 A verbal and written agreement to marry is made between the groom and the bride’s father or guardian.  This agreement must be declared in the presence of 2 witnesses.

The ceremony is presided by a religious official from the ROMM, called the ‘kadhi’.

The agreement is sealed with a small sum of money called ‘mahar’ or the ‘mas kahwin’.  This gift is to acknowledge the sanctity of marriage and encourages marriage even among the poor. 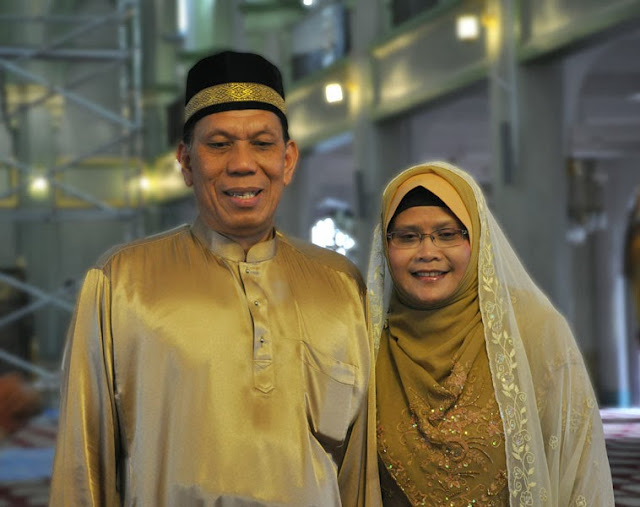 The ‘akad nikah’ ceremony is a family affair, attended by relatives, close friends and guests.  The groom sends a ‘hantaran’ or exchange of gifts to the bride.  The gifts are then displayed in the bride’s room.  In return, the bride’s side is also encouraged to reciprocate.

The ‘Bersanding’ ceremony takes place the next day and guests are invited to join in the celebrations in a ‘kenduri’.  A ‘kenduri’ is a feast that has been prepared in the Malay tradition of ‘gotong-royong’ or ‘cooperation’.  Often, kenduris are held at void decks to accommodate the large number of guests.

A raised dais or ‘pelamin’ is prepared for the bride and groom.  This signifies their ‘thrones’ as the wedding couple is treated as ‘king and queen for the day’.  Relatives are invited to sprinkle flower petals and rice on the couple.  These are fertility symbols with wishes for a fruitful union.

The excitement and joy of the wedding is enhanced by the presence of a tambourine or ‘hadrah’ troupe who accompanies the groom on his journey to meet his bride.  To add colour to the procession, a visible array of ‘bunga manggar’ is commonly used.  The hadrah troupe also sings praises to God and good wishes to loud ‘kompang’ beats.

A silat performance marks the welcome of the groom.  Usually 3 silat persons will perform.

Other characteristic features of a Malay wedding include:

§     the ‘berinai’ or henna application ceremony, whereby the bride’s palms and feet are decorated with dye from henna leaves.

§     the ‘tukar pakaian’ or costume change ceremony, where the bride & groom change outfits for photography sessions.

§     the use of ‘sireh’ leaves to signify virginity of the bride; and  ‘bunga manggar’ or palm blossoms made from tinsel paper accompanying the groom when he fetches his bride

At the end of the kenduri or feast, guests are given eggs or ‘bunga telor’ as a sign of a fertile union and the hope that the marriage will produce many children.

As the younger generation of Malays become increasingly cosmopolitan, some of these traditional practices may no longer be adhered to.  Nevertheless, they continue to form a vital characteristic of the rich Malay custom.


The Matrimonial Law of Singapore is governed by two acts, the Muslim Marriages act (1966) which falls under the Administration of Muslim Law Act (AMLA) whereas the other is under the Women's Charter. Muslim marriages are solemnised and administered by the Registry of Muslim Marriages (ROMM) whereas the Civil Registry (ROM) governs the Women's Charter.
websites of interest:

The Sultan Mosque in Singapore

Wow, what a fabulous event to witness! Congratulations to the happy couple.