Why Do They Call it "Chicken?"

Good Question. In the late 1800's, early miners traveled far in search of gold. Food was sometimes scarce, but a particular area near the South Fork of the 40-Mile River was abundant in Ptarmigan, now the state bird which bears a resemblance to a chicken (Ah the foreshadowing is thicker than steel.) The miners kept themselves alive with the help of the Ptarmigan (if you consider being eaten as helping.)

In 1902, Chicken was to become incorporated, the second town in Alaska to do so. The name "Ptarmigan" was suggested. Many people liked the name, but felt the quotation marks were too presumptuous. The name was shortened to Ptarmigan.

The only problem was that nobody could agree on the correct spelling. They didn't want their town name to be the source of ridicule and laughter, so they decided on "Chicken." (The irony is thicker than the foreshadowing.)

This photo is of the CHICKEN POOP, as in the male and female loo:

This is of the CHICKEN POST OFFICE ...... small, but servicable! 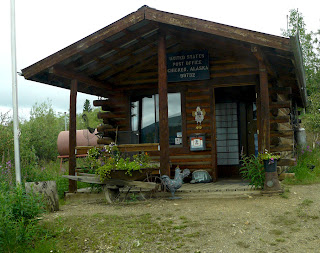 Now these two photos are of the ABC pies sold in the Chicken Cafe...

A is for APPLE, B is for BLUEBERRY and C is for CHERRY !!

they are so delicious: 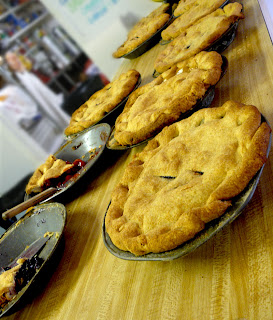 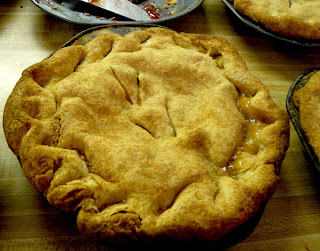 and to read more about the little township of Chicken, check out the website: