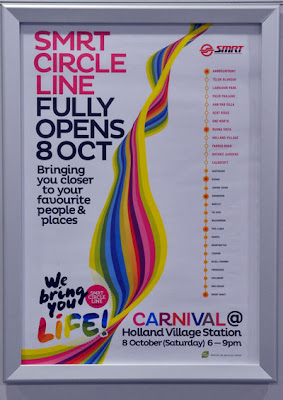 This coming Saturday - October 8 2011 - the Circle Line will open with 12 new stations here in Singapore. When fully open in 2012, this fully underground line will be 35.7 kilometres (22.2 mi) long with 30 stations (excluding Bukit Brown) and will become the world's longest fully automated metro line. (Automatic train operation (ATO) ensures partial or complete automatic train piloting and driverless functions.)
The Circle Line is coloured orange in the rail map below: 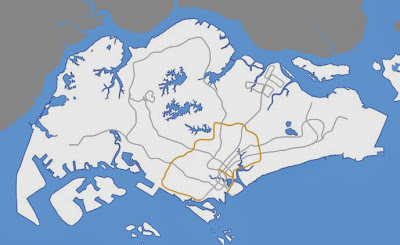 The following information is from WIKIPEDIA and on their site has the Circle Line (CCL) as Singapore's fourth Mass Rapid Transit line, operated by SMRT Corporation.As the name implies, the line is an orbital line linking all radial lines leading to the city, and also covering many parts of the Central Area. It will also include a branch line beginning at Promenade Station and ending at Marina Bay Station. Transfers to the North South Line will be provided at Bishan, Dhoby Ghaut and Marina Bay stations, East West Line at Paya Lebar and Buona Vista stations, and North East Line at Dhoby Ghaut, Serangoon and HarbourFront stations. The future Downtown Line will interchange with the Circle Line at Bayfront, Promenade, Botanic Gardens and MacPherson stations. 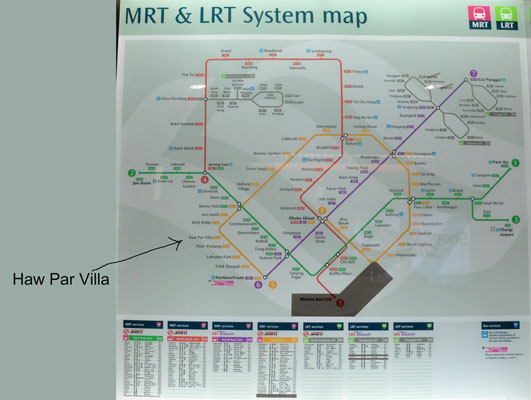 the MRT 'map' above shows the new circle line in orange and the Haw Par Villa MRT will now be the closest one for us here on Pasir Panjang Rd. It will be a 12 minute walk, or about 4 minutes by bus.


The Circle Line is the first medium capacity line in Singapore. As a medium capacity line, each Circle Line train has only three cars instead of the six-car configuration as seen on current MRT lines.  When complete, half a million people are expected to use the Circle Line each day. The completed line will reduce travelling time for commuters by allowing them to shorten trips between north to east or north to west and vice versa, bypassing busy interchanges like City Hall and Raffles Place. 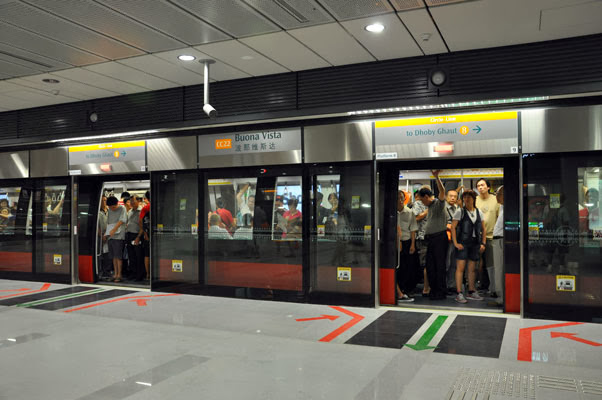 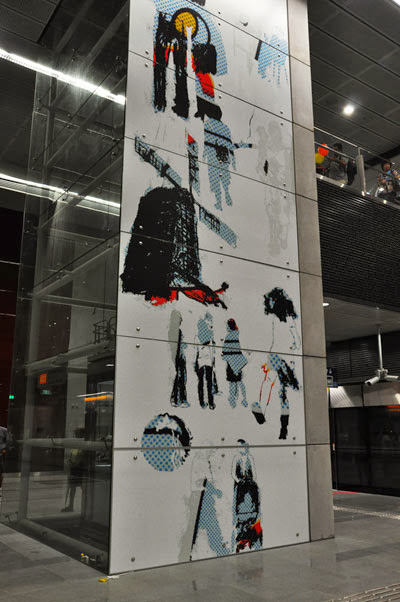 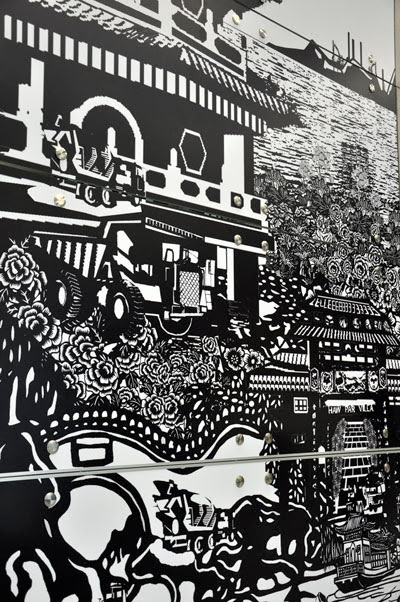 Originally scheduled to be opened from 2006 and fully opened in 2010, with an estimated cost of S$6.7 billion, the Nicoll Highway collapse caused the construction of the line to be delayed. As a result, the opening of the Circle Line was delayed to 2009, and the entire line is now expected to be fully operational by 2011 (excluding the Marina Bay Extension), at an estimated cost of nearly S$10 billion.

Due to the re-alignment of the Nicoll Highway station to a new location, the station will be two thirds the size of the original plan before the collapse, and located 100 metres (330 ft) away from the highway collapse site. 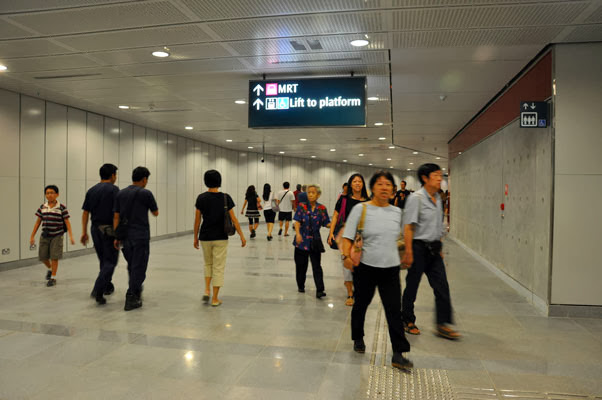 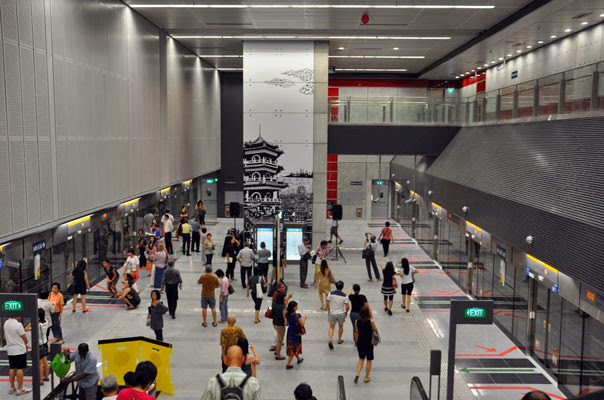 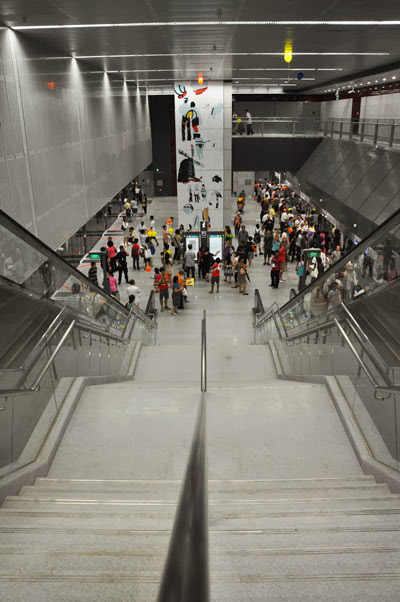 28 May 2009:    Stage 3 (Bartley-Marymount) opened 17 April 2010:   Stage 1 and 2 (Dhoby Ghaut-Bartley) opened 08 Oct 2011:     Stages 4 and 5 will open. On October 3, 2011, Transport Minister Lui Tuck Yew announced that the Marina Bay Extension, CE1 Bayfront and CE2 Marina Bay will open in January 2012.
Every MRT station in Singapore has helpful signs for visitors and locals alike ..... the new Circle Line exit signs that display exit points and what exit for what road are larger than in the older MRT stations. 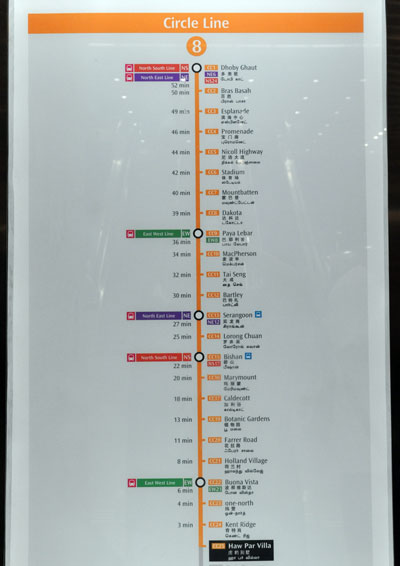 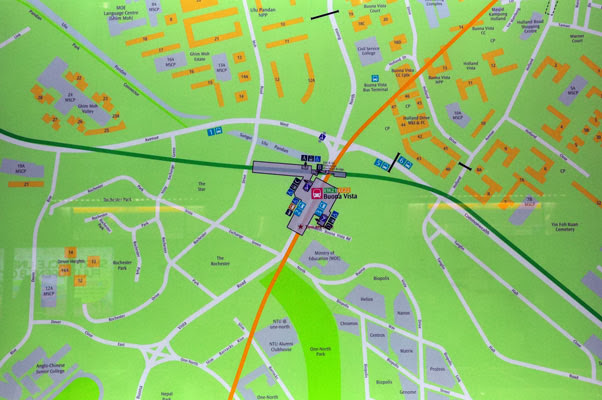 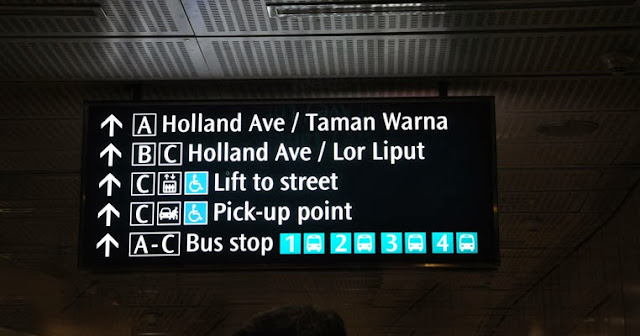 For us the Circle Line will be beneficial for many reasons, one being that we have a few 'new' food venues to try once the Circle Line is open .. at One North MRT we can head towards Fusionpolis for some authentic Turkish fare which is right next to the MRT and at Farrer Road .. we will have the Empress Market, this market is often visited by chefs and discerning cooks for fresh produce. But the 'cooked' food is worth checking as well. Not forgetting the Pasir Panjang MRT for the Food Centre right beside that as well!


and John will have the added benefit of even more stairs to run up! 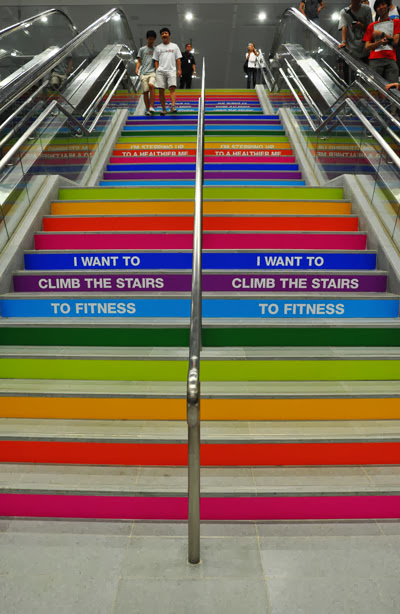 We are looking forward to the extra benefits that the Circle Line will give us and many others as well. This will open up a whole new world to people that had difficulty in reaching the Botanical Gardens, Bukit Chandra, the Haw Par Villa or even some of the museums.

We are lucky here in Singapore as  (according to both of us!)  the public Transport System (including the bus) is the best in the world and quick and easy to get around too.