Thursday July 10 and on our way to Whitehorse!!!

This is taking me a lot longer than I thought it would.......have not dared count how many photos I actually took while Janine and I were traveling thru Alaska and The Yukon. But it seems to be taking forever to sort thru them, upload to flickr, keep the blog as up to date as possible and just generally sorting thru the photos!!!

Our last night in Dawson City and Janine and I went to Diamond Tooth Gerties for a few drinkies, a game or two of Black Jack (well that was Janine actually!!) and then a few more beers before watching the show....

great fun night for our last night in Dawson City, where I half expected Wyatt Earp to come out with his six gun.!!

Dawson City is a place that could grow on you, at first it felt like a huge overgrown Universal Studio movie set........ but there are real people and real homes and real restaurants that add to the atmosphere of this great little place in The Yukon!

But we had to leave on Thursday morning to continue on our journey via Klondike Highway towards Whitehorse.... 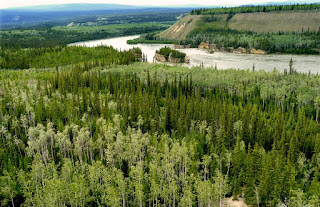 The above is the Five Finger Rapids.

Northern Tutchone Indian people called this site Tthi-cho nadezhe meaning 'rocks (standing up) in the water'. The five channels or 'fingers' of water are divided by four pillars of erosion resistant basalt rock. Grooves and lines along the rock walls of the river are clear signs of recent glaciation.

This valley is a major wildlife migration corridor. The slopes and cliffs below extend to the Alaska border and beyond, and are vital nesting and feeding habitat for many Yukon species. 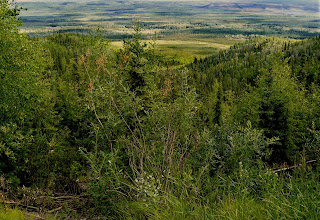 The above image is of the Tintina Trench.

The Tintina Trench is a linear valley, extending into Alaska and southeast across the Yukon.

It was first recorded as a geological feature in the early 1900s by a geologist with the Geological Survey of Canada. Beneath the Tintina Trench is a fault line along which bedrock has shifted a minimum of 450klm laterally.

Some 65 million years ago, the rocks presently beneath Dawson City were adjacent to those of Ross River. The Trench had a dramatic impact on the river drainage system. The formation of the trench created a channel for rivers draining the interior to the south.

Later, blockages due to ice buildup during the first glacial period around 3 million years ago, caused the Yukon River system to be rerouted.

Photo taken July 10 2008 along the Klondike Highway on our way to Whitehorse, Yukon Territory.


next posting: we arrive in Whitehorse!