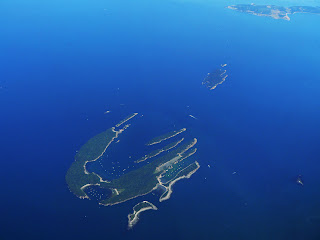 departing from Vancouver at 12.45pm, these few images taken about half an hour or so after departing Vancouver. 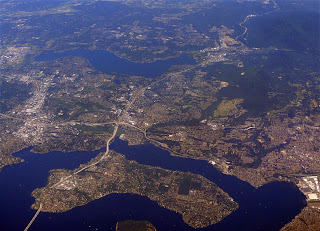 The large Island in the lower part of the image is MERCER ISLAND. The dark green patch over to the right of that island is PIONEER PARK.

The main highway running down towards the lower left of the screen is HWY 90 (Mountains to Sound Greenway) and out of sight, way down past the lower left corner, the highway leads to SEATTLE.

The highway across the screen... left to right.... is HWY 405. With the town of BELLEVUE to the left. Far lower right of screen is the GENE COULON MEMORIAL PARK and CEDAR RIVER.

The little patch of land at the bottom centre of the screen is SEWARD PARK and the stretch of water there is LAKE WASHINGTON. Towards the top of the image is LAKE SAMMAMISH. 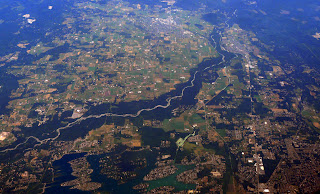 This aerial image looks quite 'busy' with so many places that you can see...... I hope the following description will help!

Mt RAINIER is right up (off screen) at the far top right hand corner of this image.

The township of BONNEY LAKE is lower right of the screen.

The river you see here is the WHITE RIVER and another township - BUCKLEY is at the top, centre of the image.

Now, right down at the bottom of the image are a few oval shaped islands ...... that is LAKE TAPPS and the TAPPS ISLAND GOLF COURSE.

You may like to look at this area using GOOGLE MAPS and type in LAKE TAPPS...... view it in Terrain or Satellite.

according to Wikipedia.....The White River is a river in the U.S. state of Washington. It flows about 75 miles (121 km) from its source, the Emmons Glacier on Mount Rainier, to join the Puyallup River at Sumner. It defines part of the boundary between King and Pierce counties. 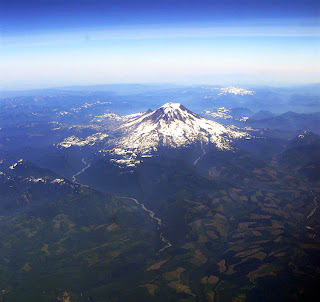 seen thru the dirty window on a flight from Vancouver to Los Angeles... July 20 2001.

The Carbon River is a river in the U.S. state of Washington. It flows about 30 miles (48 km) from its source, the Carbon Glacier on Mount Rainier, to join the Puyallup River at Orting.

Charles Wilkes called the river the "Upthascap River", but after the discovery of coal along its banks in 1876 the river was renamed "Carbon".

Mount Rainier is an active stratovolcano (also known as a composite volcano) in Pierce County, Washington, located 54 miles (87 km) southeast of Seattle, Washington, in the United States. It is the highest peak in the Cascade Range and Cascade Volcanic Arc at 14,411 feet (4,392 m). The mountain and the surrounding area are protected within Mount Rainier National Park. With 26 major glaciers, Mount Rainier is the most heavily glaciated peak in the lower 48 states with 35 square miles (91 km²) of permanent snowfields and glaciers.

The summit is topped by two volcanic craters, each over 1,000 feet (300 m) in diameter with the larger east crater overlapping the west crater. Geothermal heat from the volcano keeps areas of both crater rims free of snow and ice, and has formed an extensive network of glacier caves within the ice-filled craters. A small crater lake, the highest in North America, occupies the lowest portion of the west crater below more than 160 feet (50 m) of ice and is accessible only via the caves.