Thirty-six flights to and from Jakarta's main international airport were cancelled Saturday November 6 2010 because of the volcanic eruption from Mount Merapi, a Soekarno-Hatta International Airport spokesman said.

"Thirty-six flights to and from Jakarta from 11 airlines have been cancelled today. I think it's for safety reason due to the volcanic ash from Merapi," spokesman Sudaryanto said. 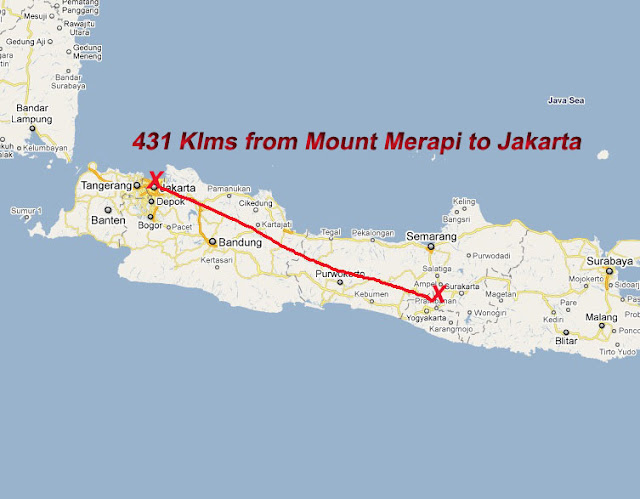 "Safety is good, but actually the ash hasn't reach Jakarta." he added
the ash may not have physically reached the city of Jakarta, but the ash is in Flight Air Space for many aircraft and I personally feel they have done what they feel is necessary for the safety of everyone.
The airlines that cancelled their flights are Singapore Airlines, AirAsia, Emirates, Malaysia Airlines, JAL, Turkish Airlines, Lufthansa, China Airlines, Korean Air, Tiger Air and the local airline Mandala.

Flights to airports closer to Mount Merapi -- including Yogyakarta, Solo and Bandung -- have also been affected but this is the first time that flights to the Indonesian capital have had to be cancelled. 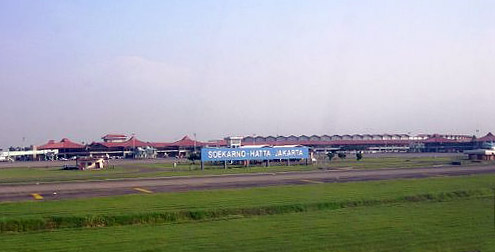 Jakarta International Airport (A on the map below) is located 20 kilometers
west of Jakarta city center. 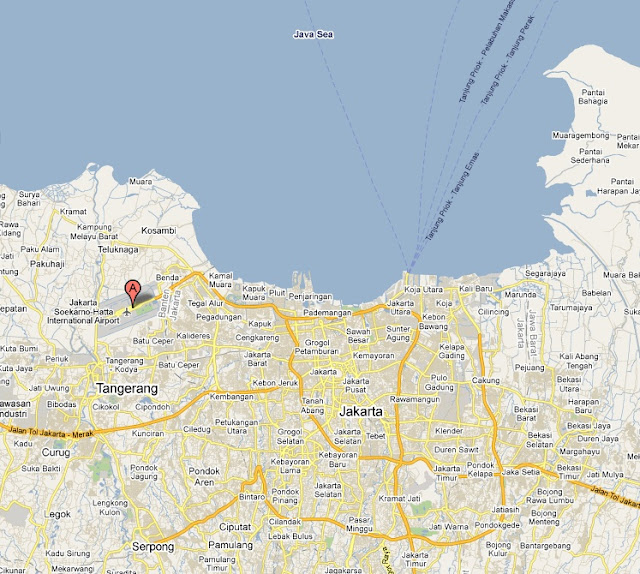 Because of the the above happening today with regards the Jakarta Airport, it reminded me of my recent trip to Jakarta and the airport itself.
Arriving at the airport for my first trip to Jakarta and proceeding through immigration and customs was fairly quick without any major dramas.... then came the time to locate a cab!
We had been warned to only get the Blue Bird Cabs
so we looked for anyone announcing them selves as Blue Bird Drivers
one man came up to us and showed us his card that said:
Blue Bird Cabs
we took him at his word as he told us it was a prepaid fare of 350,000 Rupiah.
he took my bag and off we went to the cab, I turned around to remind Ianey to be
careful of her bag as there were two young boys walking very close to her.
Our cab driver put my bag down on the roadway as he opened the back area.
These boys proceeded to lift the bag into the cab
then the driver told us to tip them!!!
Be warned.
it should not have happened, but it did and it was quick.
I don't believe he was a Blue Bird driver at all.
It cost us 350,000 rupiah to go to Le Meridien and I believe it should not have cost us
any more than about 200,000 Rupiah.
Anyone can produce  a hand card that says "Blue Bird Cabs".
be warned.
but we got to the hotel safely and that was important.
on the return journey to the airport a few days later, a Blue Bird Cab picked us up at the hotel and it cost us 90,000 Rupiah. I paid him 100,000 Rupiah which is still a lot less than the 'prepaid' 350,000 Rupiah we paid the first driver!
Amazing security at the airport though, as you enter the airport you need to go through the first (of five) security checks. 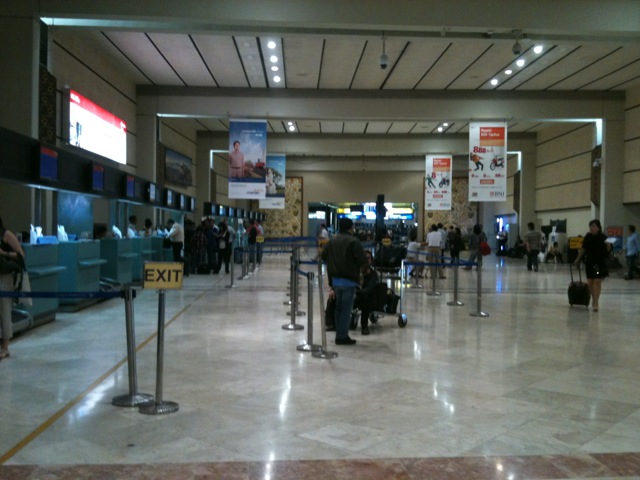 Soekarno-Hatta International Airport has 150 check-in counters, 30 baggage carousels and 42 gates. Each sub-terminal has 25 check-in counters, 5 baggage carousels and 7 gates.
Very large and spacious .... but there could be more seating for passengers, everyone was standing or walking around with only a few seats.
There are a few stores in the first part of the airport, but as soon as you can, go through to the 'inner airport' as there are many more stores inside and they are also a little cheaper with much more variety.
Another 'word of warning', no where have I read and certainly no one has ever mentioned that there is a form of 'departure tax' imposed as Jakarta Airport. There is no departure tax elsewhere in Indonesia that I am aware of, so this did come as a surprise to me.
Most people like to leave a country with very little of the local currency left in their wallets and so it was by chance I had 300,000 Rupiah to pay the "departure tax" for us both, which we only became aware of once we checked our bags in! 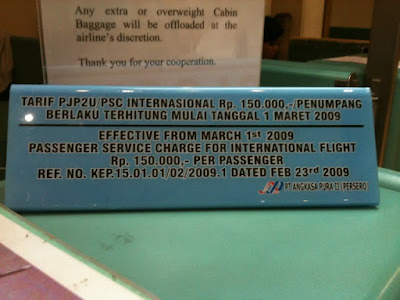 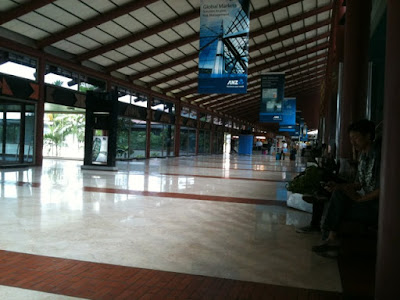 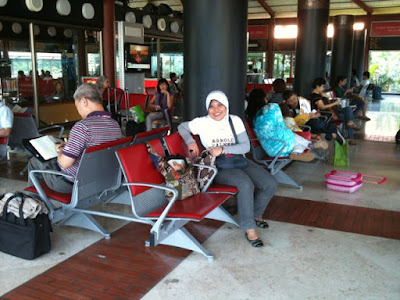 but we were soon on our way back to Singapore
so if you are flying into Jakarta for the first time
be aware of the 'prepaid' taxi drivers that call themselves BlueBird Cabs and only go to the actual counter for a legitimate cab on your way out.
The cab fare should not be any more than 100,000 Rupiah to Le Meridien Hotel (late 2010) which is not far from the Jakarta Plaza Shopping Mall
and
also the 'passenger service charge' of 150,000 Rupiah per passenger
hope the above helps in planning of any trip to Jakarta
.

Thanks for that..... was not aware of any other departure tax for other area's of Indonesia .... certainly none where we have been other than Jakarta.

Most travelers would ge caught unaware's I think ... so a cautionary word of warning to everyone is important 'just in case'!!

There is departure tax (or by some other names) in any airport, e.g. airport tax/fee, etc.

We still have that in Singapore but you won't even know it because it is included in your air ticket.

That was the first time I have had to pay a 'departure tax' in Indonesia ..... and like I mentioned above, there would be many that would be caught unawares when booking in ... most people would have got rid of the majority of their Rupiah before reaching that counter.... most of us would expect any tax (if applicable) to be included in the ticket and to suddenly pay that amount per person would be a bit of a shock - especially if it were a family for instance!!

I am not 'complaining' that there is a tax - merely pointing out to travelers to be aware of it prior to arriving at the
airport.

Most of my blog posts over the past three years are there to help people in gener with directions, shopping, traveling, guidance, just generally basic things that may be of use to others - hopefully!!!!

interesting article,, thanks for sharing .. I am glad to read it because it adds to my knowledge