we love prata ..... but not everyone knows what it is!

Roti prata is a fried flour-based pancake that is cooked over a flat grill. It is usually served with a vegetable or meat based curry and is sold all over Singapore in food centres. 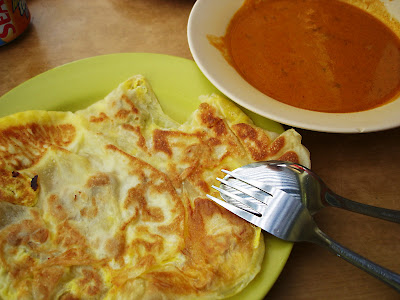 This is the one I had last week with curry sauce.
Prata is also commonly cooked (upon request) with cheese, onion, banana, red bean, chocolate, mushroom or egg.
Sometimes when I have it at home here, I first slice a banana, put it in the frying pan with a little butter, sugar and cinnamon ...... cook till golden brown, but not 'mushy'. Set aside and cook the prata as usual. When the prata is ready, serve on a plate with the banana mix on top add ice cream and you have the most delicious 'snack' or dessert for yourself.
Roti prata is a traditional South Indian food. It has always been known as Parota in India while it is usually known as roti prata in countries like Singapore.
Roti prata and the Malaysian variant Roti canai are served slightly differently, influenced by each country's culture. There are also differences in nomenclature in Singapore and Malaysia.
In Singapore, the varieties of roti prata are named mostly in English, such as cheese prata or onion prata, whereas in Malaysia they are commonly named in the Malay Language, such as roti telur for "egg prata."
Although the term roti canai is used for the Malaysian variant, the term roti prata is used in Southern Malaysia. 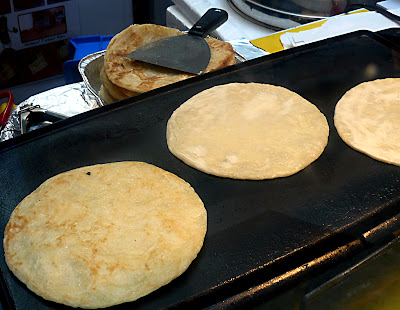 Roti Prata is prepared by flipping the dough into a large thin layer before folding the outside edges inwards. The dough will then be heated on a hot plate. As above.
Flavorings or toppings, if ordered, can be added either before or after it is flipped, depending on the flavorings or the desired outcome.
The 'tissue' and 'paper' variants are pan-fried with butter, rolled into a cone shape and sprinkled with sugar.
and we usually have it with Teh Tarak or Kopi as below. 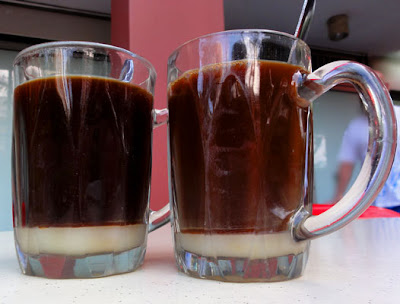 When you are in Singapore,
Roti Prata is a must on the menu at some stage!


an additional note:
have been 'house hunting' and one that we like
is within walking distance
to a Prata Shop!!
click HERE to read the blog
about that particular Prata Shop!!

That banana ones sounds good!I did not know that Roti Prata is the actual name, kindof, I thought it was something totally different! I need to do more research on some of these things.

First time visiting your blog and I like it. Glad you have made a home in Singapore. And that you love pop music.

Have you heard about our 60s music scene? Would you like to introduce it to your community by browsing through my blog?

It is a personal one.
Cheers.

Roti canai is something I loved from visiting Malaysia, Roti can be bought frozen in most Indian or Asian supermarkets in Australia. I make my own dahl and often have this for dinner as it is quick and easy, if you have the dahl frozen in meal size portions. YUUUUUMMMM

Am waiting for the day when someone creates the Durian Prata! LOL!

I love Prata, I must forward your post to family who still have no idea what I'm going on about

Here is a YouTube link that gives you a good idea too .... it is at the Food Republic in Vivo City: