the dogs in Bali

When visiting Bali one must always be extra careful with any animals, in particular any dog wandering around. There are many dogs privately owned, but with the major outbreak of rabies it is wise to keep well away from all the dogs.
The death toll from an outbreak of rabies in Bali is continuing to rise, with authorities in Indonesia confirming there are no longer any areas that are free from the disease.
At least five people have died in Bali from rabies so far this year, taking the official total to 119 since an outbreak was declared in November 2008.
However, it is possible the number could be higher because of a lack of proper reporting of fatalities associated with the disease.
The following images were taken of some dogs running around the beach where we went to watch the sunset, all of these dogs were with their owners and were well loved and cared for. But rabies can spread very quickly and it is still wise not to make contact with any of them. 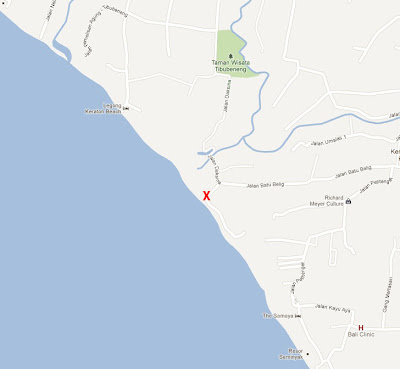 these two dogs were having a great time when their owner threw a tennis ball into the ocean for them to find and bring back! 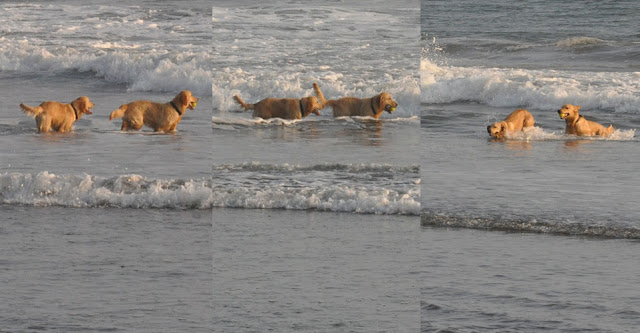 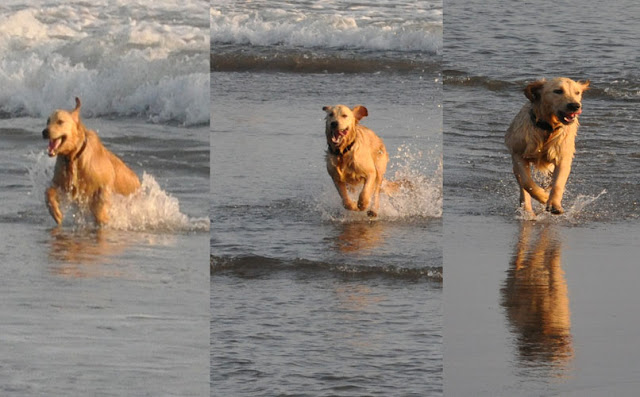 I think all dogs love running and splashing around in the ocean ..... 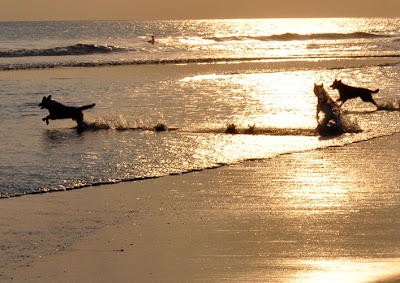 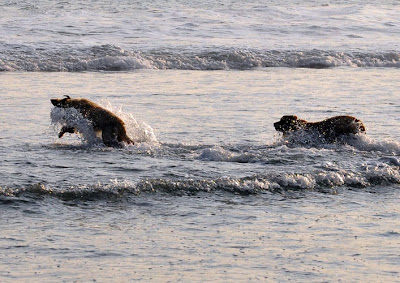 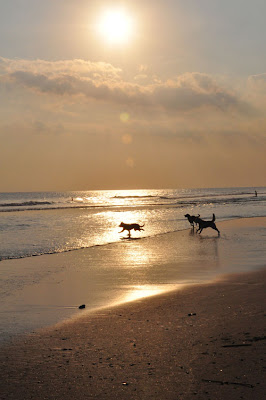 Over a two-year period since 2008, 150,000 dogs have been massacred, and more than a 100 humans have died of rabies, yet the disease continues to spread. The authorities remained impervious to the logic of World Health Organization’s experts on rabies, who point out that inoculating 70% of the dogs was the only solution, and that attempting to kill them all has never worked anywhere in the world.
While most of these dogs are rabies-free, they are best avoided. Though that is often difficult on the wide sands of Kuta beach or the upmarket precinct of Seminyak, where tourists tan themselves, sip cocktails or browse the market stalls. The dogs are everywhere, running, chasing, barking and guarding their patches. The Balinese are largely unperturbed by the nightly howling. They believe the dogs are trying to redeem themselves in their new incarnation by trying to frighten away witches and evil spirits. 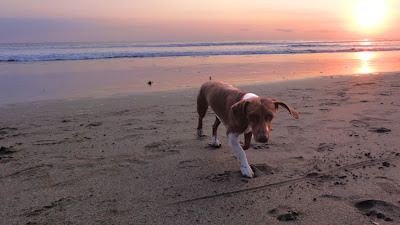 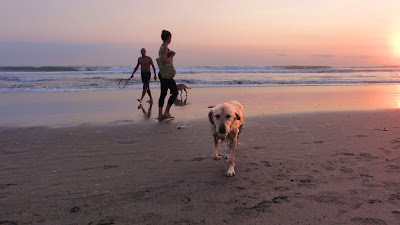 However, the rabies threat should be taken more seriously.
stay tuned for further blog posts on Bali
>>><<<

Interesting post. I have been looking into Rabies and have decided to vaccinate the family before traveling to Bali. We will also be going to Cambodia, Laos and Thailand in the next year, so it seems like a good decision? Our toddlers adore all animals and as hard as we try, it is impossible to see their every move.

Unfortunately your 'blog' is blocked so cannot reply to you personally .... are you in Sing?

I have never heard of anyone here having rabies vaccination prior to traveling within the Asian region ... we have been to all the countries you mention and most 'expats' here have also been and none to my knowledge have had any vaccinations.

Have you been to Indonesia before? I doubt any mom would have the toddlers running free with dogs, monkeys etc regardless of how active they may be ... :) I think you need to 'see' the situation. Especially with the dogs .. in Bali they lay in the middle of the street and cars and motorcycles actually drive around them ...

its like they 'have not a care in the world' .. they seem to know that no one will harm them!!

But of course this would be entirely up to you as a parent if you decide to have the children vaccinated ... but do check the side effects prior to doing so ... sometimes that maybe worse than 'the possible problem'!!

Lets see if others have 'comments' on this issue, there maybe some that have been vaccinated and it would be interesting to hear from them too.

Hi ~ yes, we are in Sing and yes, we have been to Indonesia. Our doctor here in Sing, does recommend the vaccine for some areas like Cambodia, that does not stock the post-bite medicines. So, the vaccine buys us more time to get to a clinic that would carry the needed remedies. Plus, the treatment is not as intrusive post-bite if you have been vaccinated. Obviously, we don't let our toddlers run wild in foreign countries with wild animals running around, but occasionally, they do break free! For us, the precaution is worth it and the side-effects are minimal.

Interesting (and good advice) that the Dr actually recommends this .... when we first came here nearly 5 years ago, we actually spoke with the local MD about this as we have a villa in Indonesia (with monkeys running in and out of our home!!!) and so were concerned. But he said (at the time) it was not an issue .... but of course, the recent rabies in Bali, only started in 2008 ... I would imagine there views have changed somewhat!!

I have not heard of anyone here actually being vaccinated ... but with young children that may run up to the animals (as they all tend to do) it is probably a wise move on your part. :)

We have friends in Cambodia and just asked them about the vaccinations, they have never had it done and have never seen the need to, but also say that if the MD suggests it, then do so for 'peace of mind'.

A recent friend had a rabies injection whilst overnight in hospital (in Bali) and had NOT been vaccinated ... she woke to find she was 'paralised' .... but the nurses just said "it was a side effect and it would wear off" .... would have been better had they told her prior to having the injection, she would not have woken in a total panic!!

But never let it put you off visiting Bali ... tis a beautiful part of Indonesia ... and it is better still if you look around the rural areas, well away from the tourist spots! There are many hidden gems.

as with Cambodia and Thailand.... all are simply beautiful for many and various reasons....

I actually should do a blog post 'just on our thoughts of Bali' ... even though our visit was short, we enjoyed where we stayed and the people of the surrounding district.

Just for the peace and quiet the 5 days was well worth it :)

Well worth reading PRIOR to any visit in this area ... though we didn't have any issue or any contact with any animal whilst there .... it is still possible for ANY DOG (or other animal) to come running up to you or your child without warning.

The following is the current world medical alert, inc Bali for Rabies: