a walk along Petain Road in Singapore

am taking a short break from the blog postings of our Mediterranean Cruise to catch up with some of the more recent happenings in and around Singapore!
recently we went to Petain Road in the Little India area of Singapore...... so lets go take the walk: 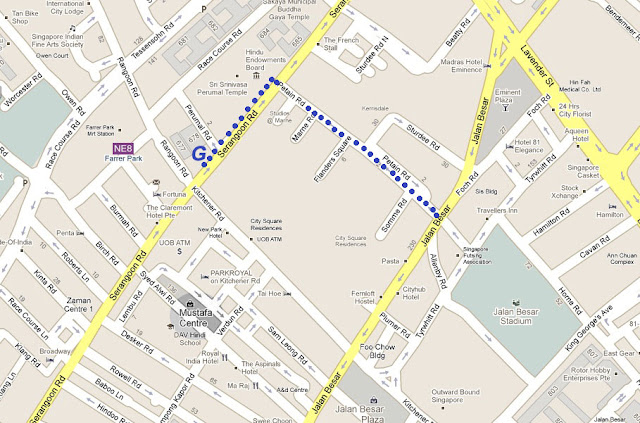 If traveling by MRT (Mass Rapid Transit) then exit at Farrer Park station which is on the NE (north east) line and look for EXIT G:

once you exit, turn left on Serangoon Road.. 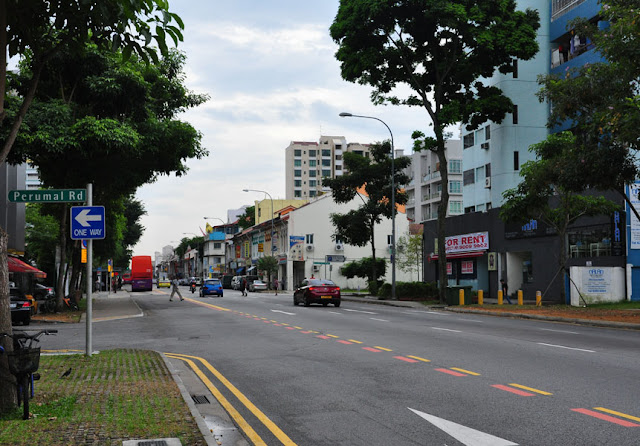 as you walk along the left side of Serangoon Road, look across the road at those older Shop Houses, yes, they do need a little tender loving care ..... but look closely at the hand painted tiles.... 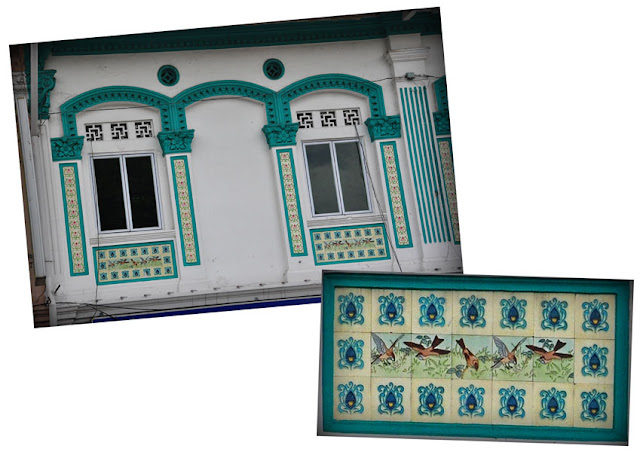 see the lovely tiles of the birds above? It is too easy to miss seeing some of the 'beauty' of these Shop Houses as we hurry on by .... 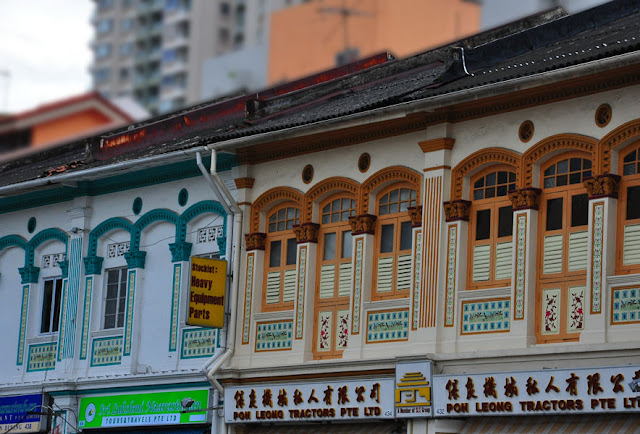 A little further along on the left is the Sri Srinivasa Perumal Temple, and then on the opposite side of Serangoon Road, is Petain Road, you cannot miss it. 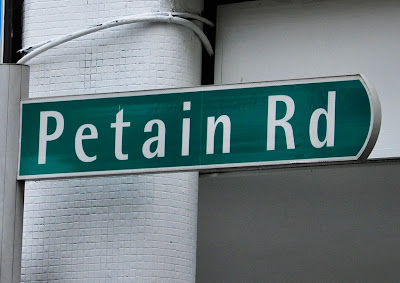 After turning into Petain Road you will first notice this building with the winding staircase .... a very common sight in Singapore! 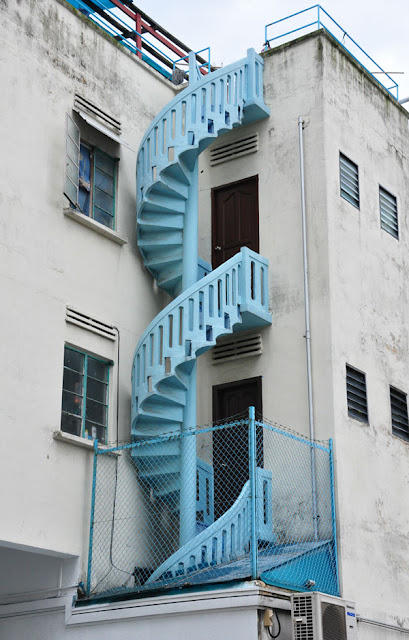 then you will see a small worship house, set back off the roadway ...... 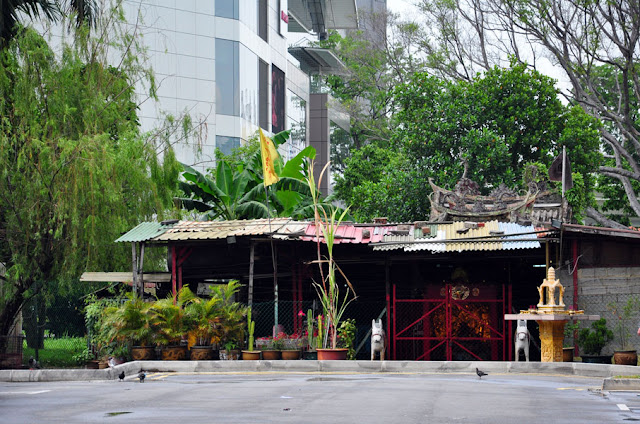 this street is also home to a few cats as seen here drinking water from the puddle on the road: 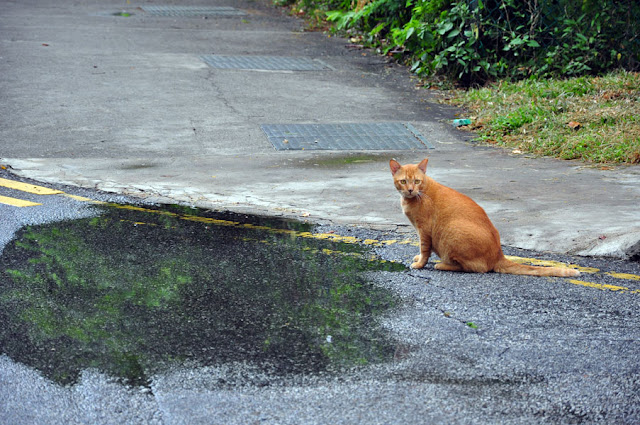 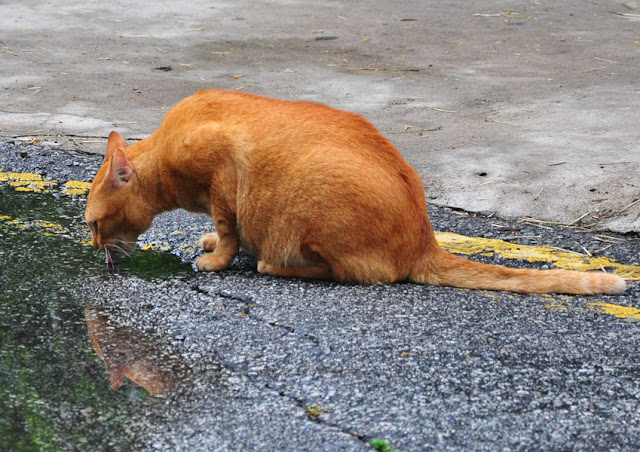 and just a short distance across the road you will see the intersection of Petain and Sturdee Roads ..... 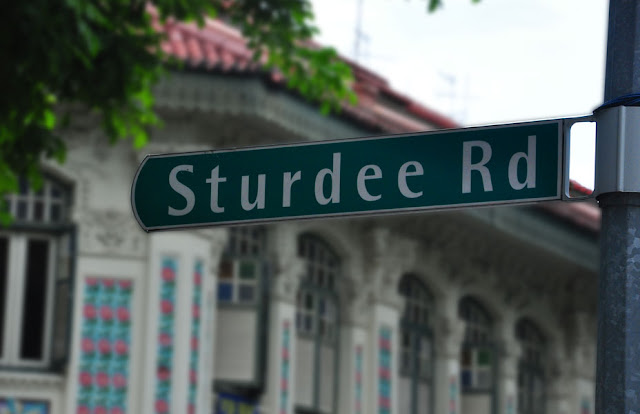 a friend recommended a visit to Petain Road as an area to see some beautifully renovated Shop Houses in the block called "Petain Court" ..... and she was not wrong! 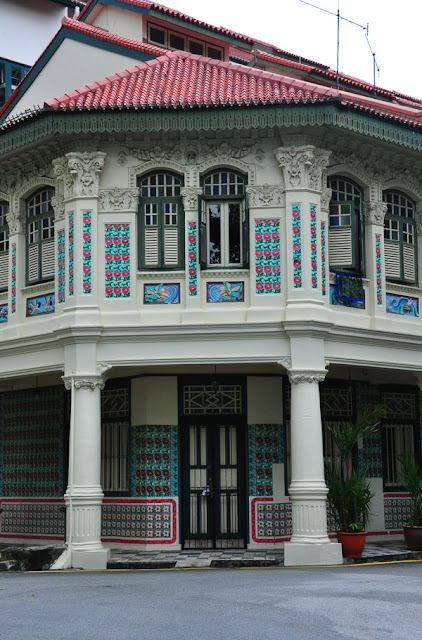 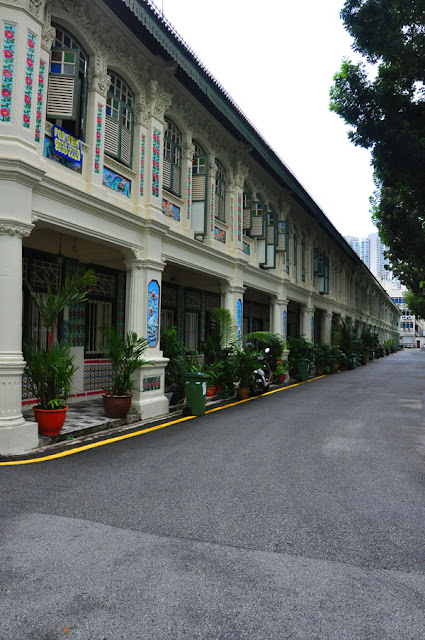 Like many of the nearby roads that were built after World War I, it was named after men who had distinguished themselves in World War I battles. Petain Road was named after the Marshal of France, Henri Philippe Petain (1856 - 1951).
The street was once a swampland filled with vegetable gardens cultivated by Chinese farmers. In 1916, the swamps were drained and the farmers moved out, and the area was converted into a residential neighbourhood. 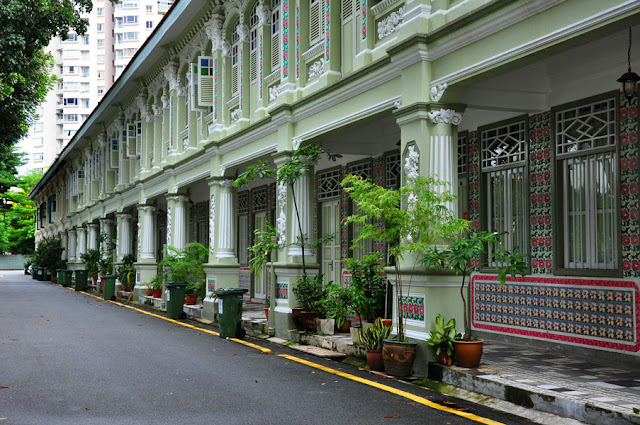 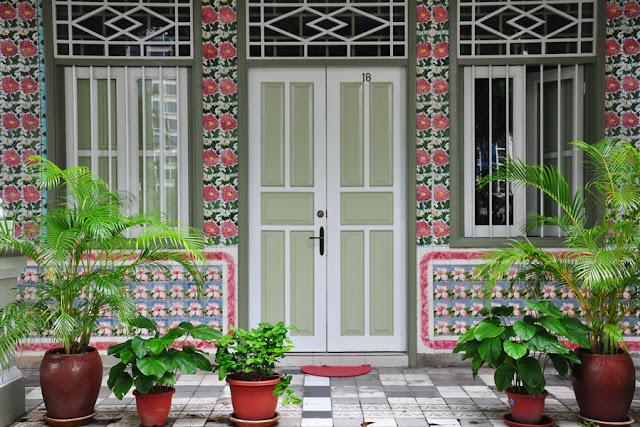 It is here that architecture typical of 1920s Singapore can be seen at its best. Termed Singapore Eclectic or Chinese Baroque, the architecture is a blend of European, Malay, Indian and Chinese influences. 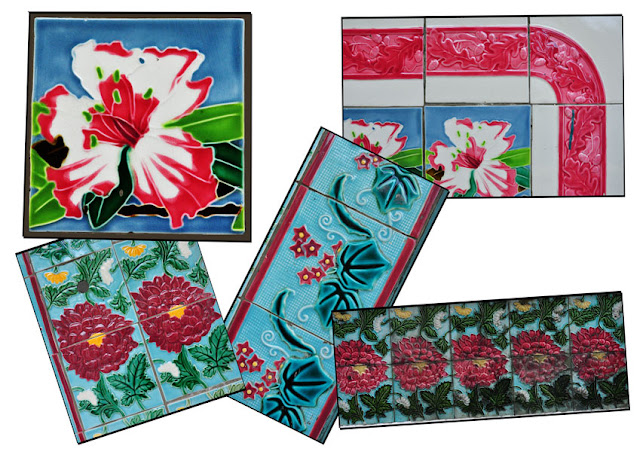 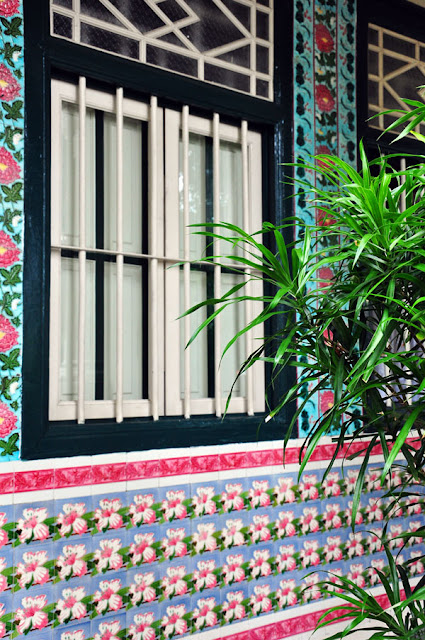 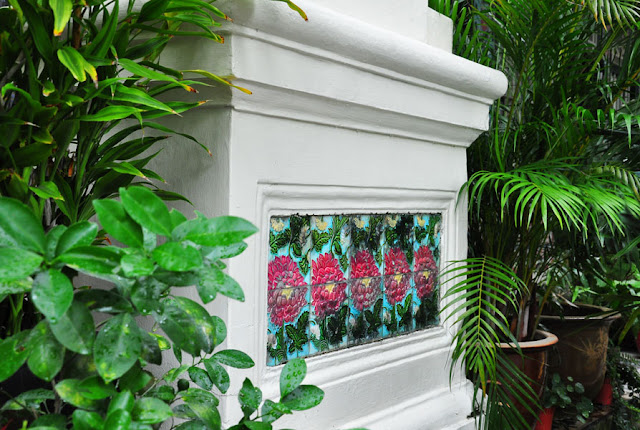 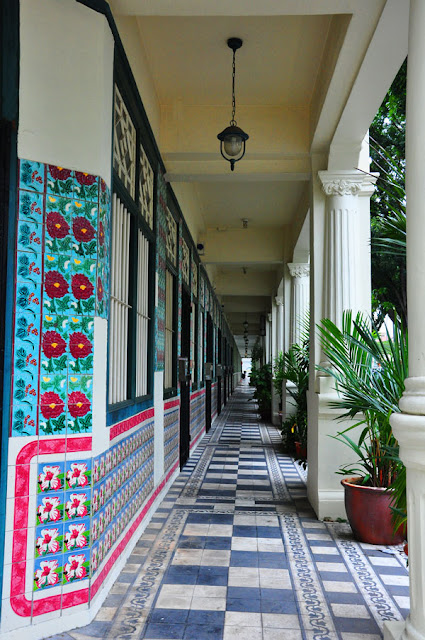 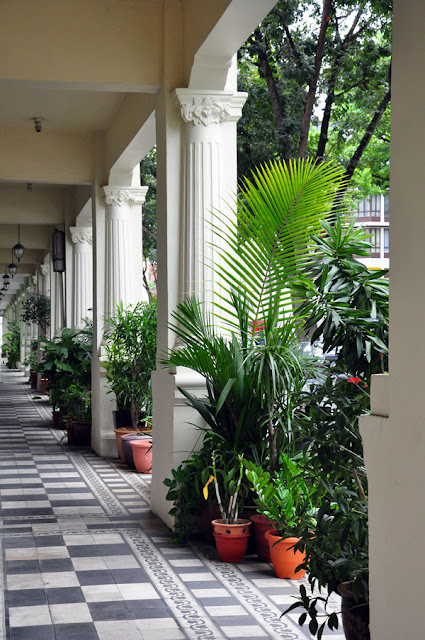 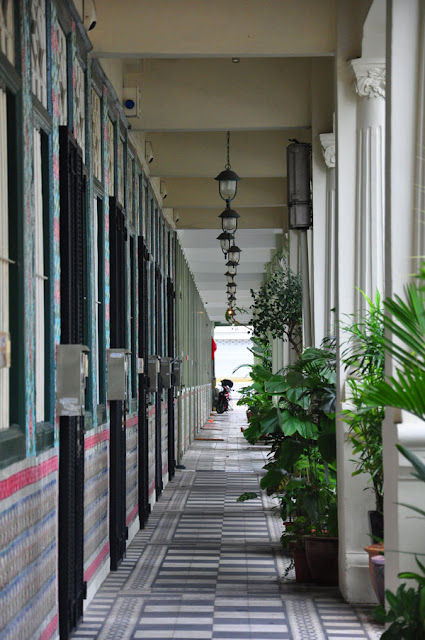 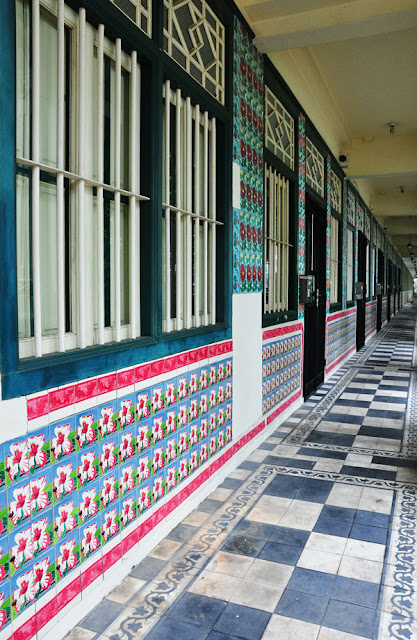 The covered five-foot walkway (as above) linking the houses is beautifully tiled. Look up at the well-preserved houses to spy the modesty window. This is just above the heads of visitors and it opens out (unknown to the visitors) to allow the occupants to see who came a-calling. Take note also of the pintu pagar, the half-size swing doors fronting the main full-size doors. The half-doors had a practical use: they encouraged ventilation while affording the occupants privacy when the main door was kept open. 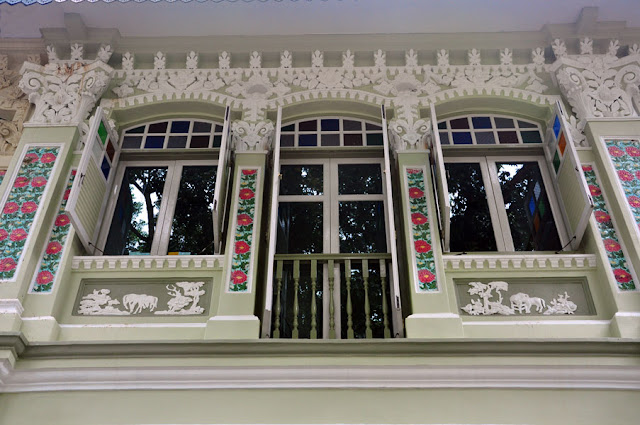 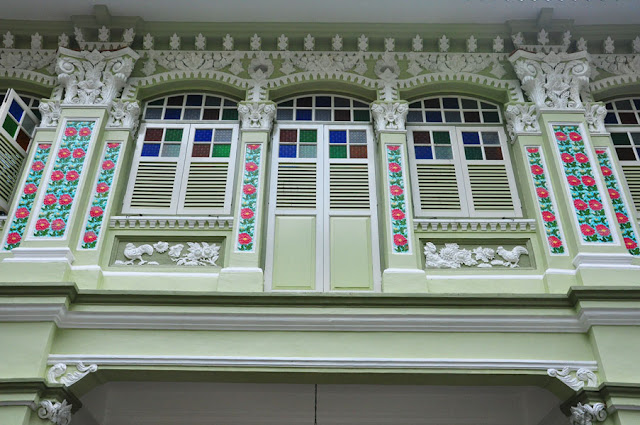 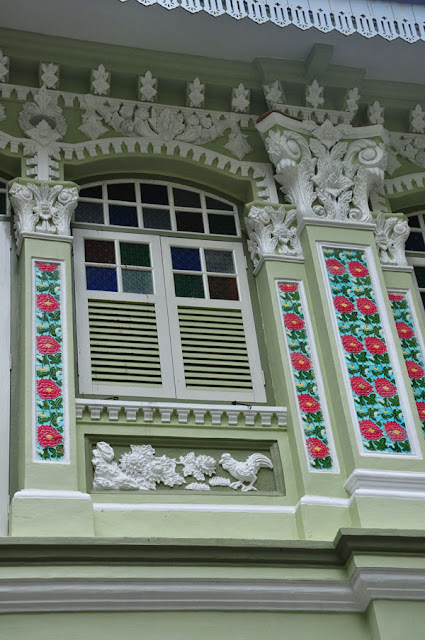 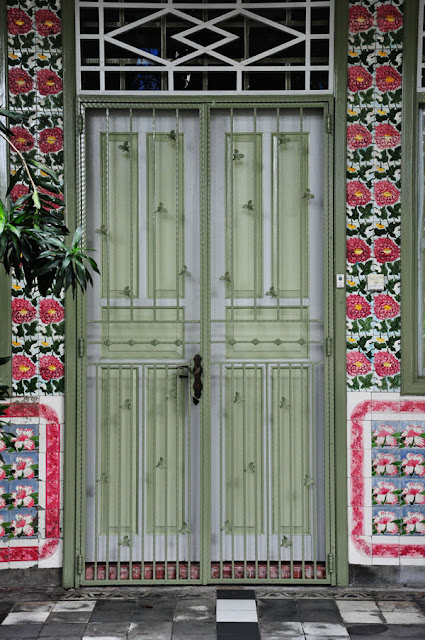 The back lanes of the houses are distinguished by a chute opening through which the residents would throw out garbage that would be swept out twice a day when the Rochor River tides came up. The chutes are no longer used although they are still evident. 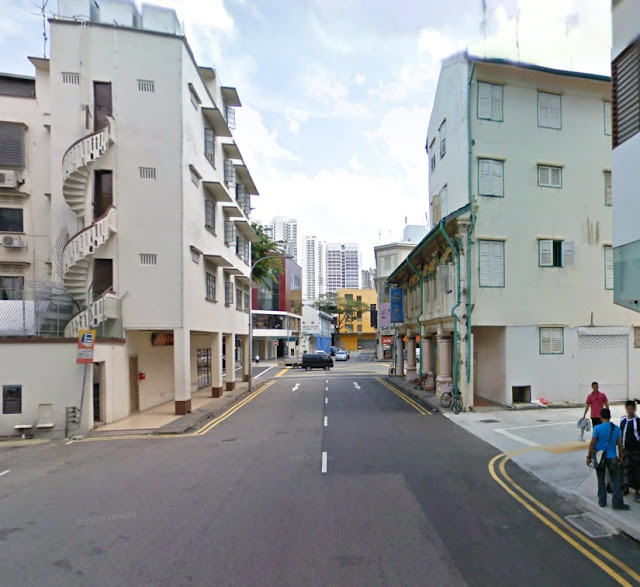 Continue on past these beautiful Shop Houses and walk towards Jalan Besar (as in above Google Earth Image) where there are a few older and certainly less cared for, Shop Houses that are close by the corner of Petain Road: 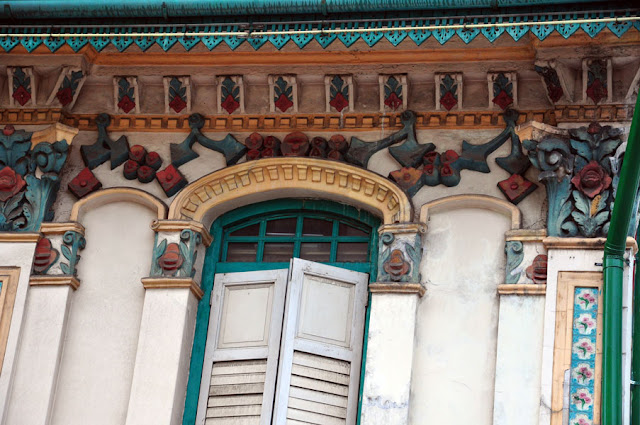 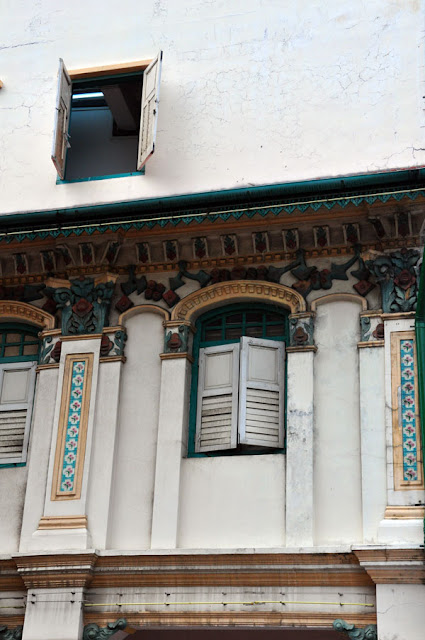 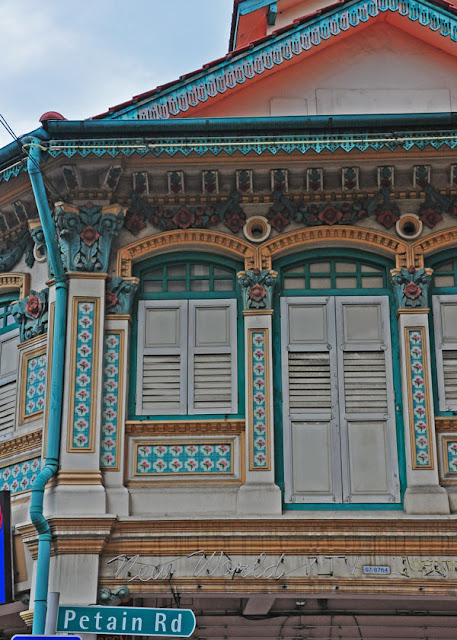 by looking at these, you will appreciate the time and effort that has gone into preserving the Shop Houses in Petain Road.

Hope you enjoyed the walk!
a few of the blog posts in my "walk series" are as follows:
a walk along Telok Blangah Road
a walk to Pasir Panjang Market
a walk back to The Smokehouse Hotel, Malaysia.
a walk into Brinchang, Malaysia.
a walk along Neil Road in Singapore.
a walk through West Coast Park, in Singapore
an early morning walk in Koh Samui, Thailand.
a late afternoon walk in Koh Samui, Thailand.

From "Pastel Portraits":
"The stretch of 18 exceptionally rich, ornate, pastel, an heavily-tiled terrace houses at No.10 to 44 Petain Road are possibly the most homogeneous and intact group of eclectic terrace houses in Singapore.
The area developed relatively late. Until the early 20th century it was the locale for Chinese vegetable gardens. After World War 1, the streets were laid out and given the names of people and places associated with famous World War I battles. Petain Road owes its name to Henri Phillipe Petain (1856-1951) who was Marshal of France.
The houses were designed by J.M.Jackson, architect, civil engineer and valuer, for a certain Mohamed bin Haji Omar. Plans were submitted to the then Municipal Building Surveyors' department on 18th August 1930. During World War II, No.10 was probably damage by aerial bombs because, during the Occupation, plans were submitted by architect Kwan Yow Luen to the Japanese authorities in the Japanese year of 2603(1943) for permission to carry out damage repairs.
The use of glazed ceramic tiles is particularly lavish. The colours are reminiscent of Nonya porcelain, kebayas, sarongs or beadwork. The peony flower, chrysanthemum, tulips, birds and mythical creatures predominate. The tiles were imported either from France, England, Belgium, Spain or Japan and are one of the most attractive and distinctive features of Straits Chinese houses."

A photo caption describes the houses. "...set back from the road with a pleasant green space in front and in excellent, intact condition, represents the full flowering of Singapore Eclectic Architecture. It is the the Grand-daddy of them all. Rich, robust, and baroque, with an abundance of decoration and details that works so remarkably well-from the free use of the Classical inspired orders, such as the Composite pilasters on sturdy plinths on the first storey, the second-storey Composite pilasters embellished with tiles, and the decorative plasterwork, to the Malay inspired timber fascia boards and the Chinese inspired bas relief depicting animals under the second-storey side windows. Most spectacular is the unabashedly abundant use of glazed ceramic floral tiles, primarily in green and pink colours."

Thanks so much for all that info John ..... I had added a few bits of information to the blog, but left the photos to 'tell the story' and hopefully others will go and take a look too ...

but appreciate the time you took to reply ... with loads of information that is helpful to us all.