no doubt you have read Parts ONE and TWO, so you have a fair idea of what it has been like to import Oscar into Australia.

I realise these blog posts will not be of interest to many people, but the detailed posts are mostly for others that may find themselves in a similar situation with importing their pet into Australia.
Better to know now what may need to be done and when!

Today is Thursday February 2, the day Oscar was at the vet to get his blood work done for the Australian Quarantine to allow him to enter Australia. 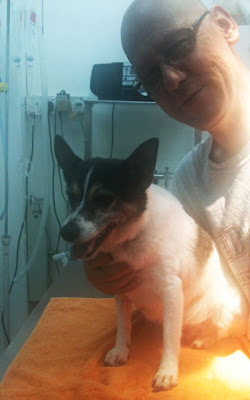 above image:
Oscar at the vets this morning.
The lights were on in the operating theatre and
it was difficult to take the photo with the IPhone.
We were at the vets by 8.45am ready and waiting. Oscar had not eaten since breakfast yesterday as he had to fast for at least 24 hours.

The vet nurse took him into the 'operating room' so they could collect at least 5 ml of blood, the courier was there from K9 Kennels ready to take it direct to The Singapore Government Laboratory.  It is not done this way for importing to other countries.

anyway, I do have to say he was extra good.

Not because he is our dog, if I saw any animal behave this way I would say the same. He sat on the operating table while they prodded and poked and not once did he wriggle or squirm or become agitated.

There were three nurses, plus John and myself in the room.

The nurse was trying to get the blood from his leg, but nothing was coming out .... well there was, but barely a drip due to his low blood pressure. The low BP being caused by the 24 hour fasting. I think she may have managed to get about 1 ml.

They then tried to get to his jugular vein, but first they had to shave his neck area due to the "fluffy hair" he now has. He was still sitting there without any problem. We were so proud of him. Even the nurses and staff were saying it is most unusual to have a dog sit there so still during these sort of procedures.

So they shaved the neck, held his head straight up (he could hardly breathe) while the main nurse went straight into the jugular vein ..... she was having  a difficult time getting the blood from there too, so one of the other nurses started to manipulate the veins with her thumbs.

That poor baby ... such a stressful situation. But he was a champion through it all.

The courier was there ready to take it to the lab, but still he had to witness the rest of the injections being administered. But Oscar is allergic to the usual annual vaccinations and so has to have an antihistamine 15 mins prior to the vaccination. The vet was excellent and did this straight away .... and while we were waiting for this to do what it had to, I gave Oscar a small amount of food that I had with me in a small cooler bag. This was the first food he had eaten in 27 hours!

Then came the injections and of course he just sat there, not a peep out of him.

The vet gave him the Frontline medication, which really is nothing after what he had already gone through and then the "Kennel Cough" medication up both nostrils. This made him sneeze profusely!

He had never had this before.

All good. The courier went off to the Government Lab, I paid the account, we called a cab and home we went.

We still had a few things to do at home, then John had an appointment at Gleneagles Hospital at 3.45pm. We arrived a little early so we decided to have a late lunch there prior to the appoint.

While there my cell phone rang and it was the vet:

My heart sank, I had no idea what she was about to say and I didn't want to hear it anyway!

She had rung to tell us that the blood had not been collected in the correct vial!!!!

The nurse was still fairly new, not only that it is rare for them to do bloodwork for animals to go to Australia, so she used the 'normal' vial, but as soon as the Government Lab saw this they called the vet requesting it to be redone in the correct vial.

Off to the vet again first thing tomorrow morning.

and no food for Oscar once again.

This poor baby has been through so much in his life, it feels like there are brick walls for him every step of the way, but he handles what they throw at him without any issue.

"Well get on with it, do what you have to do and lets go home"

we are so proud of him, he really is just so good with the injections, at the vets, getting blood work done etc.... but when it comes to taking his tablets?

Well that's another story, he is naughty. We think he has swallowed it, next thing we see him spit it out!  We hide each tablet in all sorts of food from chicken to cheese, from peanut butter to nutella, from sausage to ground beef, from honey to vegemite ..... after a day of something 'new', he is smart enough to know we are trying to trick him.


stay tuned for Oscar's Countdown..... part four, as we wait and see what happens at the vets in the morning!


if you are importing your animal to Australia, make sure you have all the documents completed, scanned and ready for when required.
Start the process at least 3 months ahead of your proposed date of travel.
Read the Australian Quarantine website thoroughly.
Be flexible where you can so there are 'no surprises' at the last moment.
Make sure you have a good vet that knows your animal. 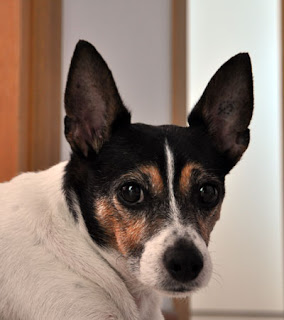