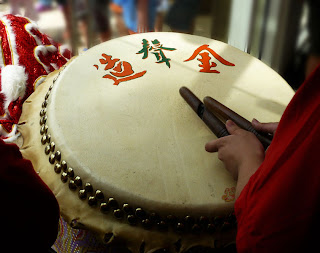 The Lion Dance is a pugilistic performance dating back to more than 1,500 years. Its performance during auspicious occasions such as the launch of new buildings, offices and shops is believed to bring good fortune and wealth. The Lion Dance is also performed during the Chinese New Year because of its association with the legendary stories of a bestial creature, the Nien, being frightened off by villagers banging on loud drums on the eve of Chinese New Year.

The lion is regarded by Chinese communities outside China as a creature representing good omen. However, the legend of Nien began with the lion as a monstrous creature. According to legend, every Chinese New Year's eve, an unknown animal came to destroy the fields, crops and animals belonging to the farmers of the village. They could not identify the beast and named it nien which came to mean "year" in Chinese. To put a stop to the ravaging, the villagers made a fearful model of the animal out of bamboo and paper, with two men manipulating it, accompanied by the loud beating of instruments. They waited for the animal on New Year's eve and succeeded in driving away the Nien. Henceforth, the Nien dance was performed annually on Chinese New Year's eve with drums, cymbals and gongs. Over time, the image of the animal came to look more like a lion and the dance was later regarded as auspicious for all significant occasions.

The dance requires two persons -- one to manipulate the papier-mâché head of the lion while another acts as the hind legs of the lion, both joined by a colourful cloth body. The S$1,000, two-kilogramme lion head is often decorated with a red bow on its horn, silk pom-poms and bells. The fur trimmings around the head is often sheepskin or rabbit fur, never of synthetic materials. The lion head has two eye-holes which allow the lead dancer to see where he is going. Often a dunce in a large mask teases the lion. Aside from spectacular acrobatic stances by the lion, the performers' co-ordination in bringing lifelike movements to the lion adds to the success of the dance. A troupe of musicians accompanies the lion dancers, playing cymbals and drums. Every gesture, from the lifting of a leg to the fluttering of an eyelid is choreographed to a particular beat in the music. Up to eight different stances are performed from happiness, anger, fright, merry-making, suspicion, drunkenness, sleep and wakefulness, with each emotion expressed by a different rhythm. Lion dancers belong to a guild or association and each guild worships a particular deity or heavenly patron.

more detailed information on the lion dance can be found here:

and the celebrations of Chinese New Year in Singapore here: 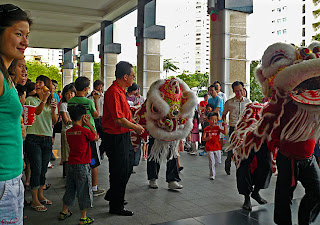 The Lion was going around the front of the building in this image, towards the car park. 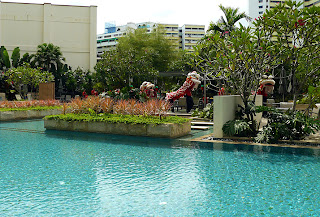 This image is of the Lions at the back of the pool area going past all the BBQ's....... the Lion Dance was performed around the complete Condo, carpark and pool areas. 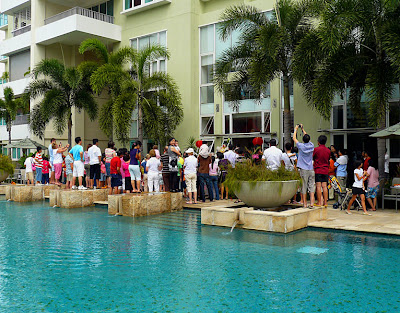 This image is of everyone standing around waiting for them to enter the lobby!