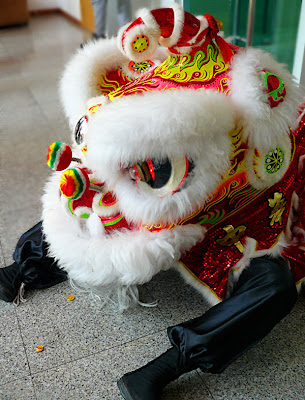 There were 9 musicians and three lions, it really was quite facinating to watch and to listen of course.....my ears are still ringing!!!

Apartments at the condo needed their homes to be 'blessed' as well so they started at the top floor (30th level) and worked their way down to the lobby area....after that the Lions went around the condo, the car parks and around the pool area ...... every area of our condo was covered!!!!!!

Will post more photos and information...this one is only to explain about the Lion itself.... note the "gold coins" in front of him...... we were given these chocolate coins by management and then the children tossed the coins into the Lions' mouth. Obviously a lot fell on the floor!

The lion head has two eye-holes which allow the lead dancer to see where he is going. Often a dunce in a large mask teases the lion. Aside from spectacular acrobatic stances by the lion, the performers' co-ordination in bringing lifelike movements to the lion adds to the success of the dance.

The dance requires two persons -- one to manipulate the papier-mâché head of the lion while another acts as the hind legs of the lion, both joined by a colourful cloth body. The S$1,000, two-kilogramme lion head is often decorated with a red bow on its horn, silk pom-poms and bells. The fur trimmings around the head is often sheepskin or rabbit fur, never of synthetic materials.

A troupe of musicians accompanies the lion dancers, playing cymbals and drums. Every gesture, from the lifting of a leg to the fluttering of an eyelid is choreographed to a particular beat in the music. Up to eight different stances are performed from happiness, anger, fright, merry-making, suspicion, drunkenness, sleep and wakefulness, with each emotion expressed by a different rhythm.

Lion dancers belong to a guild or association and each guild worships a particular deity or heavenly patron.