after spending the morning and part of the afternoon wandering around the gardens of Istana, then crossing The Helix Bridge, we come to Marina Bay Sands!!
We did not go into the building but for the moment looking at it from all angles externally is more than enough to deal with.
Architecturally  it is simply amazing.
Marina Bay Sands is an integrated resort opened on April 27, 2010 at Bayfront Avenue in Marina South in central Singapore. It was developed by one of the world's biggest gaming companies, Las Vegas Sands. It houses the second casino built in Singapore; Resorts World Sentosa was the first. Marina Bay Sands is the world's second-costliest casino, after MGM Mirage's CityCenter in Las Vegas. It is expected to generate at least $1 billion in annual profit.
It has 2500 rooms in the three 55 storey towers. 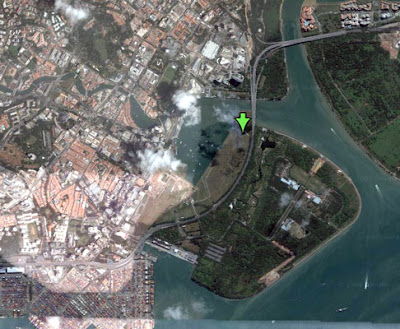 The green arrow in the 2006 map above shows where the Marina Bay Sands Resort is now located.
We have watched this amazing project growing since we first arrived in Singapore .... there would have been probably 50 cranes working at any one time at ground level in the beginning. How they managed to work around one another is a feat in itself. 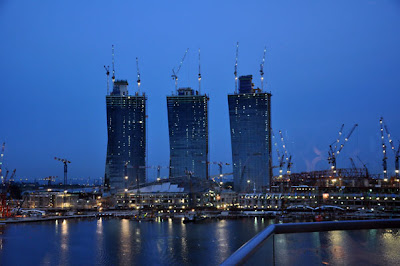 The two images above were taken in August 2009.
Marina Bay Sands features three 55-storey hotel towers which were topped out in July 2009. The three towers are connected by a 1 hectare sky terrace on the roof, named Sands SkyPark.
In front of the three towers include a Theatre Block, a Convention and Exhibition Facilities Block, as well as the Casino Block, which have up to 1000 gaming tables and 1400 slot machines. The Art-Science Museum is constructed next to the three blocks and has the shape of a lotus. Its roof will be retractable, providing a waterfall through the roof of collected rainwater when closed in the day and treating audiences to laser shows when opened at night. The Art-Science Museum opens in December 2010. 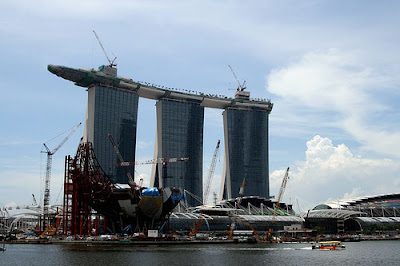 The image above was taken in January 2010.
The SkyPark will be home to the world's longest elevated swimming pool, with a 475-foot vanishing edge, supplied by the Natare Corporation of Indianapolis. The pools are made up of 400,000 pounds of stainless steel and can hold 380,000 gallons (1440 cubic meters) of water. The pools are elevated 975 feet above the ground. There are four movement joints beneath the main pools. These joints are designed to help the pools withstand the natural motion of the towers, and each joint has a unique range of motion. The total range of motion is 19.68" (500 millimeters).

the following images were all taken last weekend - May 2010 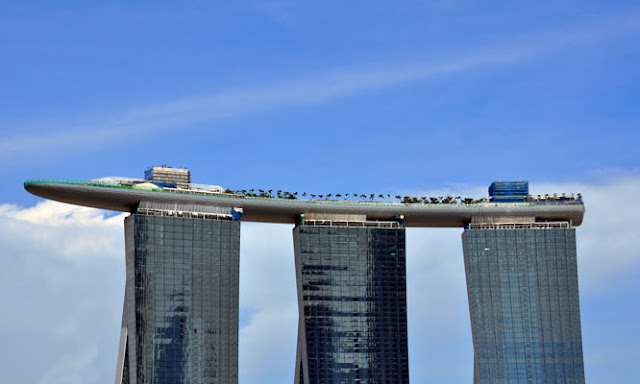 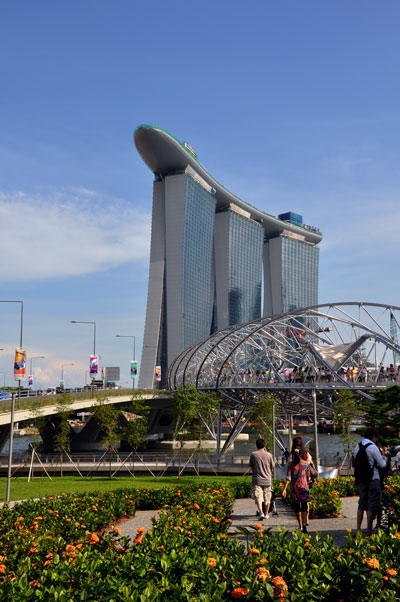 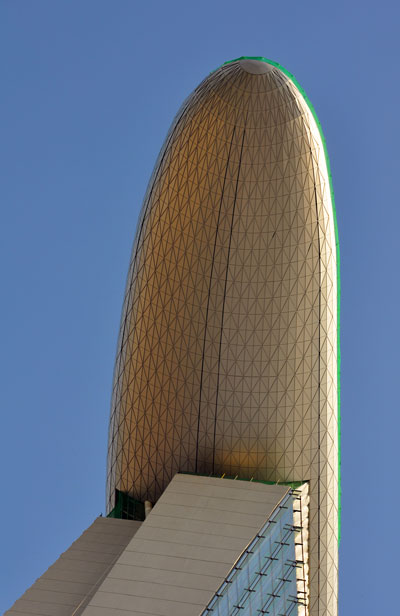 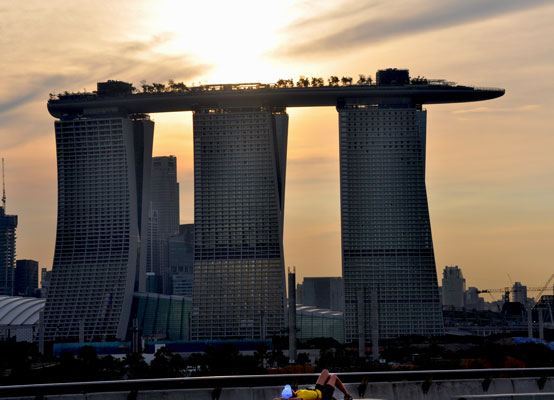 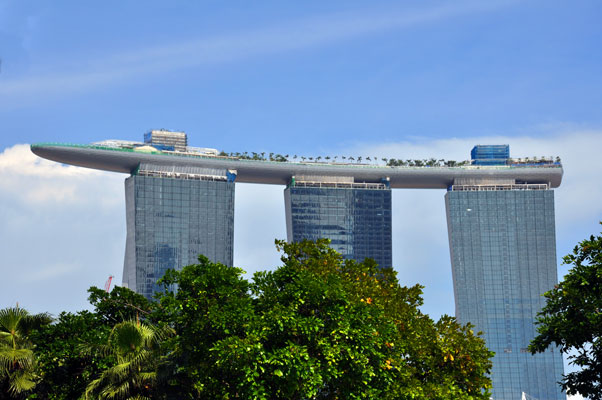 The sky park is curved, planes that come around will see a smile from their bird's eyes view. .... the towers represent three mountains or three warriors guarding the gateway to singapore. ... despite fengshui being open to many interpretations, there are rules and principles to the practice, which are guided by the so-called balance of the five elements. its silvery white facade represents metal, while other elements represent fire. wood is in the landscaping and greenery, while water surrounds it. right from the beginning mr. chong swan lek, who died in 2008 from cancer, had worked with mr. safdie to incorporate good fengshui elements into the resort's design. Since then his pupil, mrs. louisa ong lee, a singapore-born-US-based fengshui master took over.
The fengshui practioners are called on not only for aesthetic elements, but also for choosing auspicious dates. the casino opened its doors to punters at 12.18 on the first day of chinese new year. in cantonese, 12.18 sounds like 'surely will win'.