the "Long Sand Road" and it's history

In three weeks time we will be living on Pasir Panjang Road, on the West Coast of Singapore ....... while visiting the Peranakan Museum yesterday I heard that Panjang meant LONG, that inspired me to find out a little more of the meaning of PASIR PANJANG!
The name Pasir Panjang appears as "Passir Panjang" in 1851. The Malay word pasir panjang literally means "long sand", a reference to the long sandy beach that stretched along the coast in this area. 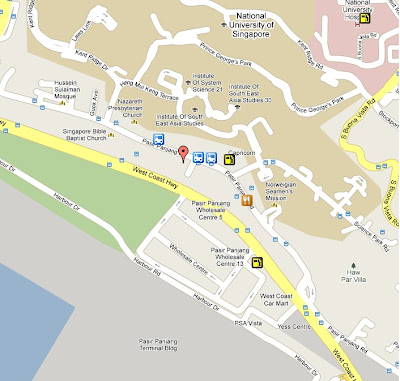 Pasir Panjang Road, which once hugged the coastline, was laid down as far as the Jurong River by John Turnbull Thomson by 1850. Thomson was Government Surveyor of Singapore from 1841 to 1853.
NOTE: According to the above map, the area showing West Coast Park, West Coast Highway and the Pasir Panjang Terminal Building is on reclaimed land! The reclaiming of the land in this area started as early as 1972.
Have circled where we will be living at Palm Mansions on the following aerial map.
Singapore's land area grew from 581.5km² in the 1960s to 697.1km² today, and may grow by another 100km² by 2030. 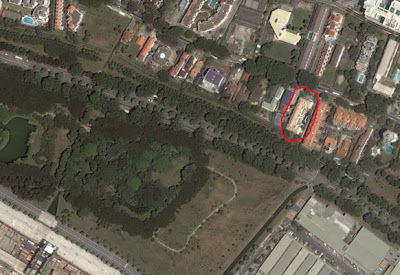 In 1910, the Government took over the opium industry and a state-owned factory was established at Pasir Panjang. In the 1920s, many of the wealthy Chinese built holiday and residential bungalows along the coast, some of which are still visible today in this area.
In 1930, some of the Malay families from the Kallang River Basin area were resettled here when Kallang Airport was constructed. In 1957, the Malay settlement here became known as the West Coast Malay Settlement. Right up till the early 1960s, this area contained many Malay fishing villages.
Since the late 1960s, the whole length of the coast, from the Singapore River to Jurong, has been reclaimed for wharves, almost entirely devoted to containerisation. The coastal area at Pasir Panjang has also been extensively reclaimed for the Pasir Panjang Terminal of the Port of Singapore. 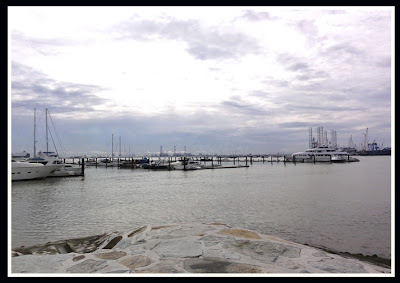 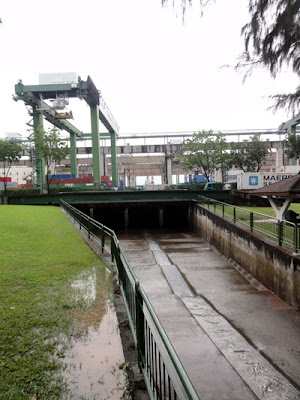 Battle of Pasir Panjang
From 13 to 15 February 1942, a decisive battle for Singapore in World War II was fought on the slopes of Pasir Panjang, now Kent Ridge Park.
The Japanese 18th Division, well-armed and heavily supported from the air, descended upon the ridge, determined to capture it from the Allied forces. Defending the ridge were the 1st and 2nd Battalions of the Malay Regiment, the British Second Loyals Regiment, the Australian Bren-Gun Carriers and the 44th Indian Brigade. Although the Allied defences on Pasir Panjang Ridge outnumbered the Japanese, the attackers had more ammunition and were far more ruthless fighters.
The Allied forces put up a heroic show, especially Second Lieutenant Adnan bin Saidi of the Malay Regiment who led the combined Allied forces in battle. The Allied forces fought the Japanese to the bitter end. When ammunition ran out, they took on the Japanese in hand-to-hand combat and did not give up even when they were down to their last few men.
The Japanese did everything they could to force a surrender, including creating a lethal oil fire in a drain that the soldiers had to cross to clear the ridge. Despite this, the brave Allied soldiers refused to abandon the ridge, preferably to die honourably than surrender. Two soldiers were burnt alive when they tried to cross the drain, while four others collapsed before they even got there.
Second Lieutenant Saidi, like a true hero, was one of the last defenders on the ridge. He was captured by the Japanese and bayoneted to death. On 14 February 1942, the Japanese won Pasir Panjang Ridge. The following day, the British surrendered.
There is a lot of history around this area and I am going to spend some time exploring most of it over the coming months .... so stay tuned for "history updates of the Long Sand Road area" as I explore this new area (for us) of Singapore! 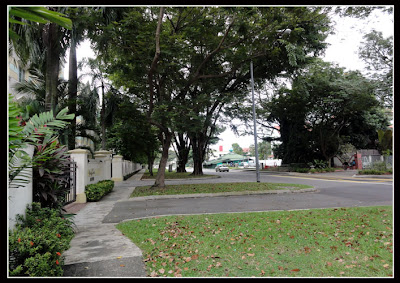 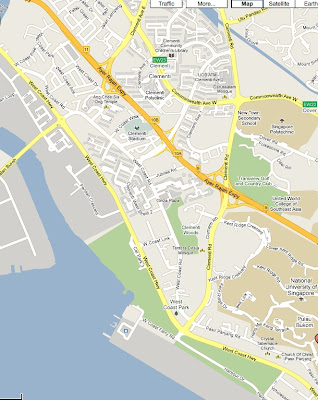 In the meantime, you may like to take a look at the Habitat News website and the upcoming events and walks in the area.
In particular, the early morning Battle of Pasir Panjang Commemorative Walk in February and the shorter Museum Fest nightwalk in May or the Heritage Fest walks during July. 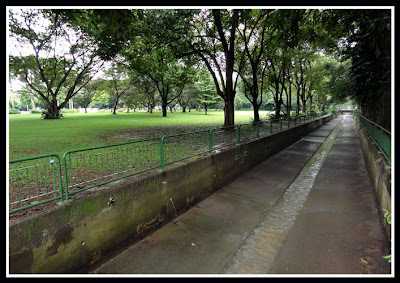 Click HERE for some info on the geography of Singapore.
*  *  *