a visit to The Peranakan Museum 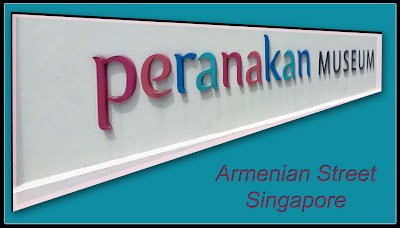 I had been wanting to go to the Peranakan Museum for quite awhile, but kept putting it to the bottom of the priority list. Yesterday it was at the top of the list!
The museum is located at 39 Armenian Street, Singapore. 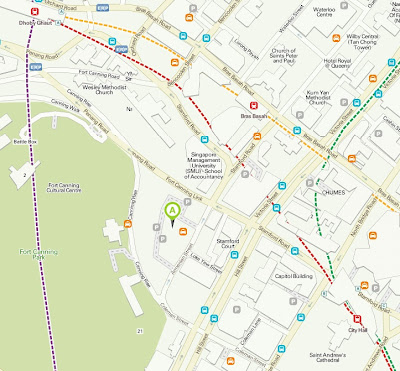 We arrived there at 11.00am just in time to take the guided tour.  It was fascinating and we did learn a lot about the world of the Peranakans.
The word "peranakan", which means "locally born" in Malay, is used to describe people who descended from interracial marriages between foreign traders and local women. 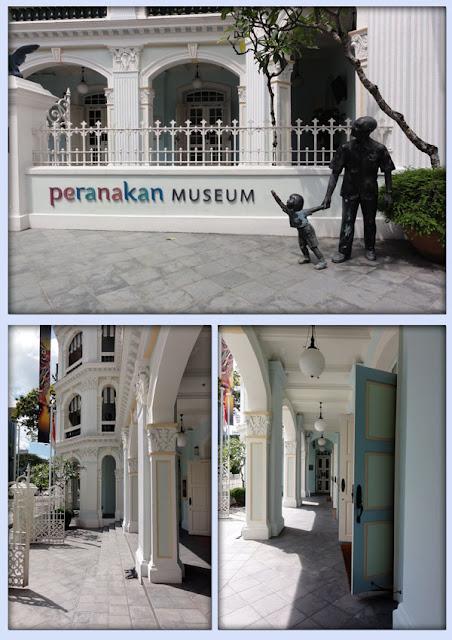 The Peranakan Museum explores the culture of Peranakan communities in the former Straits Settlements of Singapore, Malacca and Penang and their links with other communities in Southeast Asia. It is a boutique museum with one of the finest and most comprehensive collections of Peranakan artefacts in the world.  Three floors of permanent galleries illustrate important rituals, practices and the material culture of the Peranakans, as well as how this unique fusion culture is viewed today. The Peranakan Museum provides an enjoyable and educational experience for all, with intricate displays innovatively presented in ten galleries, children's interactives and special merchandising in two shops. Two temporary exhibition galleries will present a programme of special exhibitions throughout the year. The Peranakan Museum is a National Heritage Board Museum under the Asian Civilisations Museum.

The Peranakan Museum showcases the world's finest and most comprehensive Peranakan collection in displays that trace the main episodes of Peranakan life. 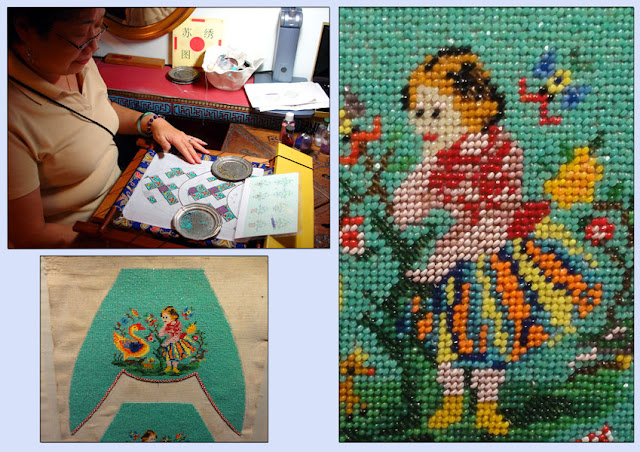 Nonyas were trained for married life from a young age. They were expected to devote long hours to perfect the art of bead work and embroidery. Discover the intricacies of traditional tools and techniques used by the Nonyas in their textile arts at the museum.
In the above image you can see the beading being done by a lady in Bussorah St, Singapore. The other two images were taken at the museum of the beading work. These beads are so fine and it takes approx three months to make a pair of slippers.


The following YouTube clip on beading is fascinating to watch:


A Kebaya is a traditional blouse-dress combination worn by women in Indonesia, Malaysia, Brunei, Burma, Singapore, southern Thailand. It is sometimes made from sheer material and usually worn with a sarong or batik kain panjang, or other traditional woven garment such as ikat, songket with a colorful motif.
The kebaya is the national costume of Indonesia, although it is more accurately endemic to Java, Sunda and Bali.
The traditional Peranakan Nonya Kebaya is seen in the following images. Take note of the intricate embroidery done by these women. 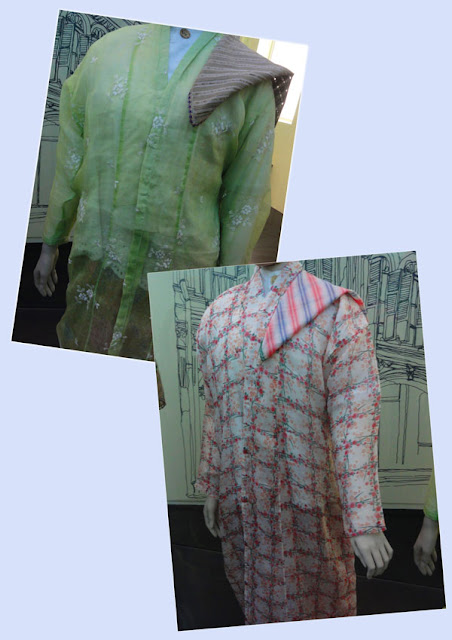 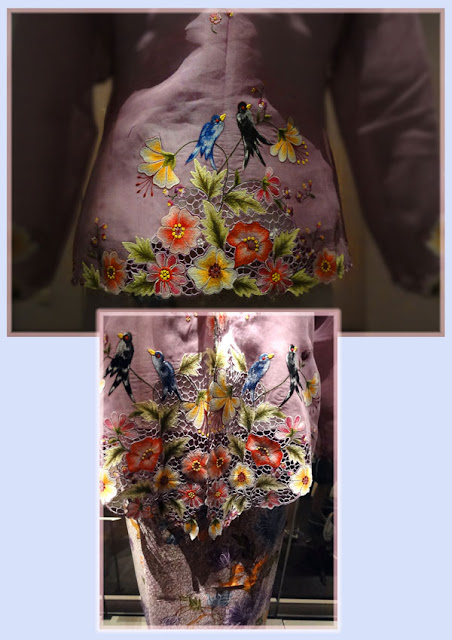 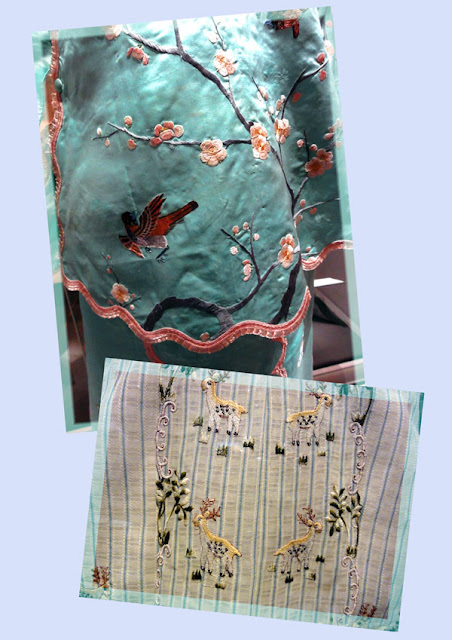 and of course not forgetting the beautiful pieces of pottery as seen below. 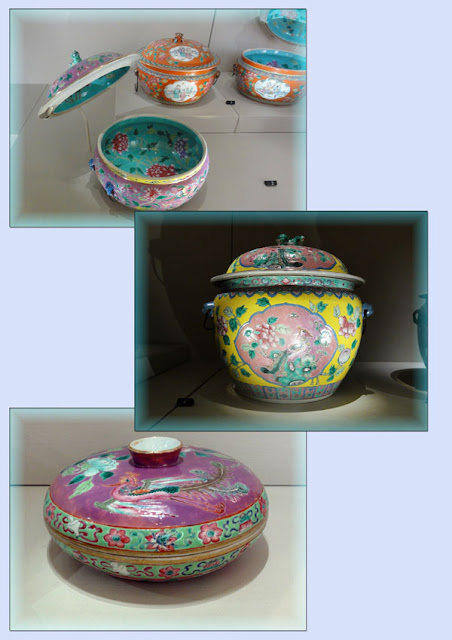 The next image has an example of the head gear worn at their wedding. 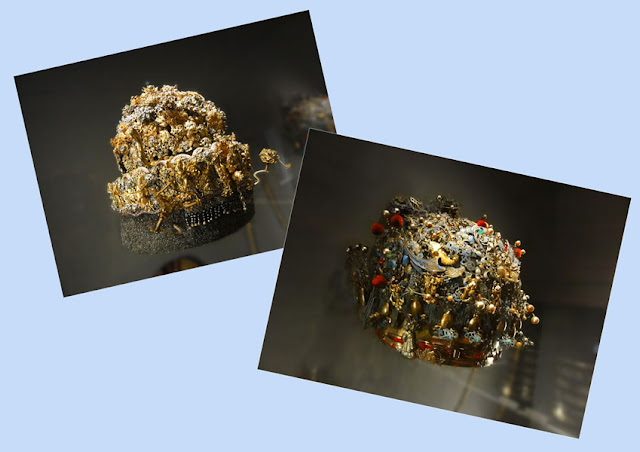 The Blue Ginger Restaurant in Singapore has been given a Peranakan-style decor. It maybe worth going in and having a look if you are interested in seeing more Peranakan architecture and decor.
But do visit the Peranakan Museum soon, you will be pleasantly surprised at what is on display.
The opening hours are 1.00pm - 7.00pm on Mondays.
and from Tuesday to Sunday they are open from 9.00am till 7.00pm ..... except Fridays when they stay open until 9.00pm.
Photography is allowed but without flash. So turn off the flash control on your camera prior to entering the museum.
Do not use your cell phone in the museum and food, drinks and smoking are not allowed within the museum itself.
Enjoy your visit to the Peranakan Museum - soon!
*  *  *

I thoroughly enjoyed my recent visit here, so glad you did too.

I did enjoy it ... and looking forward to going back soon.

Next time I will take my 'real' camera and see if I can get some better captures of the displays.

So much to see it was overwhelming.