I watched one of the Navy Ship's enter port yesterday while at Sembawang Park. There is some info below about the Singapore Naval Base for those that are interested.
In the meantime see the following images taken yesterday as the ship was entering the Sembawang Ship Yards. 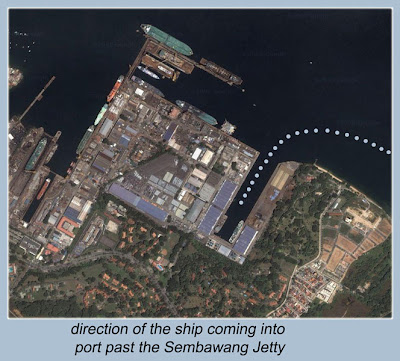 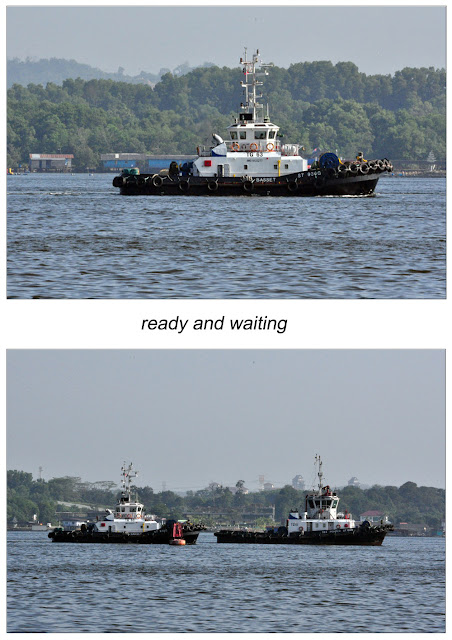 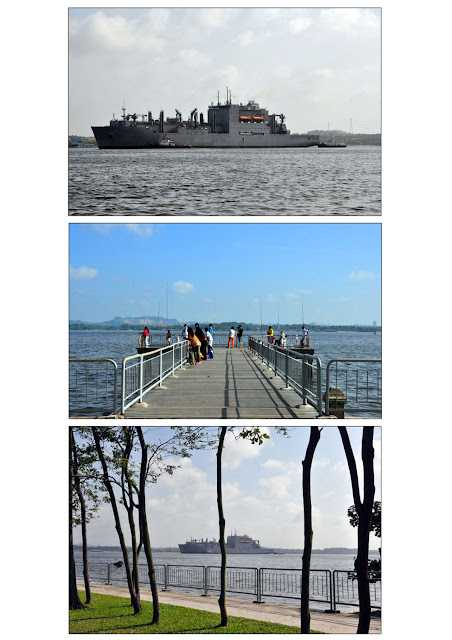 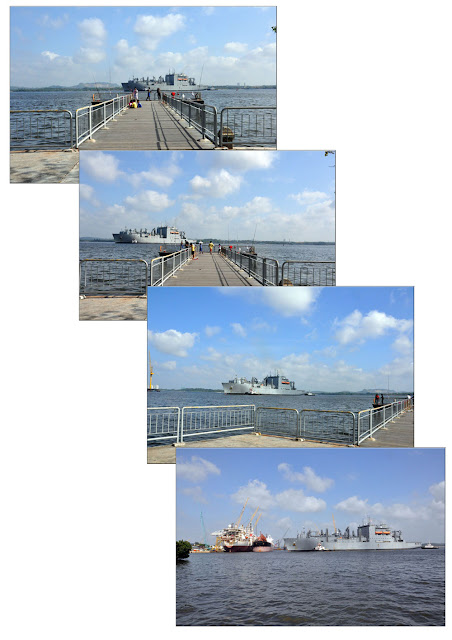 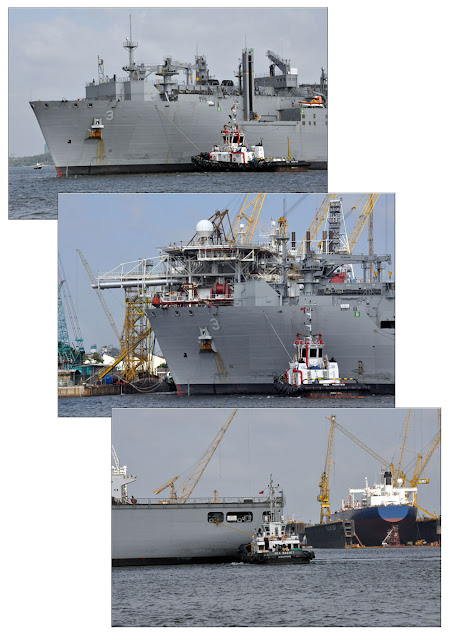 but those tug boats sure worked hard!!

Singapore Naval Base
To the west of the park is the Sembawang Shipyard, which was His Majesty's Naval Base (H M Naval Base) of the British Royal Navy from 1920s until Singapore's independence.

The busy and geographically advantaged port in Singapore and the urgent need for a naval base made the British decide to establish a Naval Base in Singapore. In 1923, the construction of Naval Base began in Sembawang and completed in 1938. In between it slowed down due to Naval Disarmament Treaty. The fully operational Naval Base was opened by Sir Shenton Thomas, the then Singapore Governor on 14 February 1938; it was the largest Dockyard outside the British Naval Base.

The battleship HMS Prince of Wales and the battlecruiser HMS Repulse with four destroyers forming the "Z" force landed in Singapore's Naval Base on 2 December 1941. Following the Pearl Harbor attack, the Japanese also bought Johore coastlines just opposite the Naval Base and attacked the two warships unexpectedly.

The two unsinkable war cruisers sank on 10 December 1941, on whose memory a Sembawang Memorial was unveiled in Sembawang wharfs in 2005.

The Dockyard was closed down in January 1942 realizing that Japanese could use the Naval Base. The British surrendered to Japanese on 15 February 1942, whose details could be found much more from Memories at Old Ford Factory museum where the surrender was signed.

For the following three years, till 1945, the Japanese used the naval base to service and repair their navy ships. On 6 September 1945, the Japanese surrendered to the British in Sembawang fleet shore accommodation, now called HMS Terror. From 1968, the naval base was converted and came to use as Sembawang Shipyard. The attacks and operations of the Naval Base at Sembawang, are closely connected to the Jetty, Pier and accommodation at the Sembawang Park itself.

With the complete withdrawal of British forces from Singapore in 1971, the Naval Base has since been handed over to the Singapore government, which in 1968 converted it into a commercial dockyard (as Sembawang Shipyard, now part of Singapore Exchange-listed SembCorp Marine). However, the British Ministry Of Defence (MoD) continues to maintain a small logistics base at Sembawang wharf in order to control most of the foreign military activities there, which includes repair, refuel and resupply for ships of the Australian, British and New Zealand navies as well as those from other Commonwealth countries under the auspices of Five Power Defence Arrangements (FPDA).

As part of a 1990 agreement between Singapore and the United States, American military forces (primarily naval and air force) have been making use of Sembawang's base facilities. The Commander, Logistics Group Western Pacific (COMLOG WESTPAC) command has been headquartered in Sembawang since 1992, providing logistic support for the U.S. 7th Fleet in its operations in the Pacific and Southeast Asia.

Hi,
Tug boats are amazing aren't they, the shear strength of these little boats, and what they can achieve is to me admired.

Interesting learning some of Singapore's history...very nice photos...thanks for sharing!