Walking into St Peter's Basilica, one cannot ignore the ceiling ..... everywhere you look there are impressive mosaics, windows, lighting etc..... 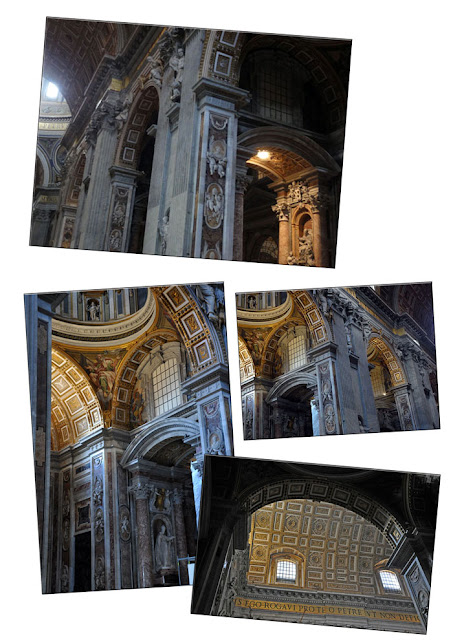 Below is the great dome that soars above the altar and the baldacchino, sumptuously embellished with mosaic and stucco ornaments. It is supported by four structural piers with a perimeter of 71 m. and a height of 120 m. from the ground to the roof of the lantern.

The giant letters on a gold background, from St. Veronica to St. Helen, say "Hinc una fides mundo refulgent" (From here a single faith shines throughout the world); and from St. Longinus to St. Andrew: "Hinc sacerdotii unitas exoritur" (From here is born the unity of the priesthood).

In the four spandrels which link the square piers and the circular drum, the four Evangelists are portrayed in medallions with a diameter of 8.5 m.: Matthew with the ox, Mark with the lion, Luke with the angel and John with the eagle.
Michelangelo's dome was only completed to the base when he died. It was later finished by Giacomo della Porta in 1590 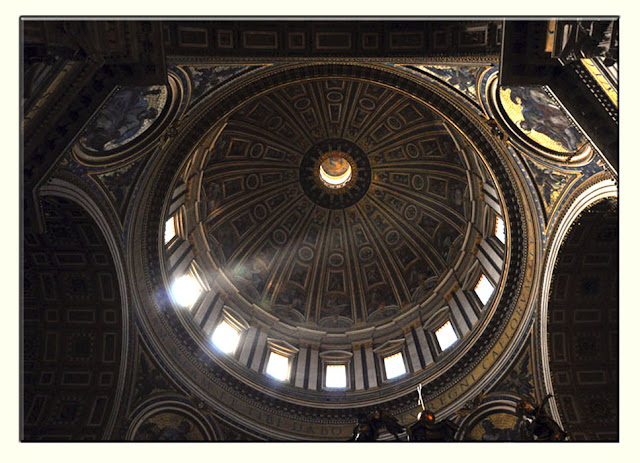 Below is seen the Coat of Arms of the Borghese Pope Paul V On the Ceiling of the Portico of St Peter's Basilica.
The great tunnel vault of the portico was stuccoed by G. B. Ricci to Maderno's design, the central panels displaying the Borghese pope's coat of arms and recounting scenes in the life of St. Peter. The ribs and arabesque reliefs are a dull gold, or rather mustard (I suspect nineteenth-century repaint) upon an exiguous white ground. The plethora of gold detail is easily assimilated into the vault owing to the great height of the portico. 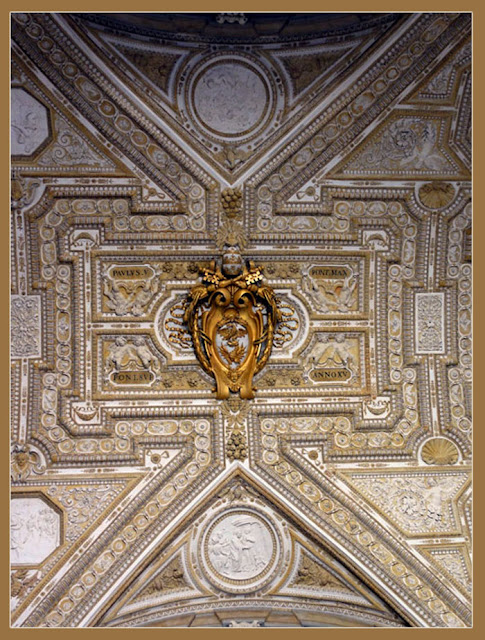 Then when you stand back and look up at the actual ceiling (with the above) you can see it as most people would see - the Gilded Vault of the Portico of St Peter's Basilica. 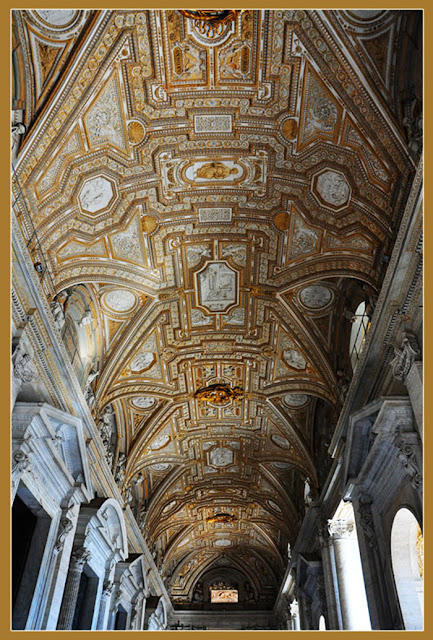 Below are the Dome Mosaics in the Cupola of the Baptistery of St Peter's Basilica:

The dome is decorated with mosaics, from originals by Francesco Trevisani da Capodistria. In the spandrels are portrayed the races of the four continents which became Christian: Europe, Asia, Africa, America. In the lunettes are various baptismal scenes: Jesus baptizes Peter, St. Peter baptizes the Centurion Cornelius, St. Philip baptizes the Eunuch of Queen Candace, St. Silvester baptizes Constantine, and several symbols of baptism: Moses causes the water to spring from the rock, Noah prays before the rainbow of the Covenan 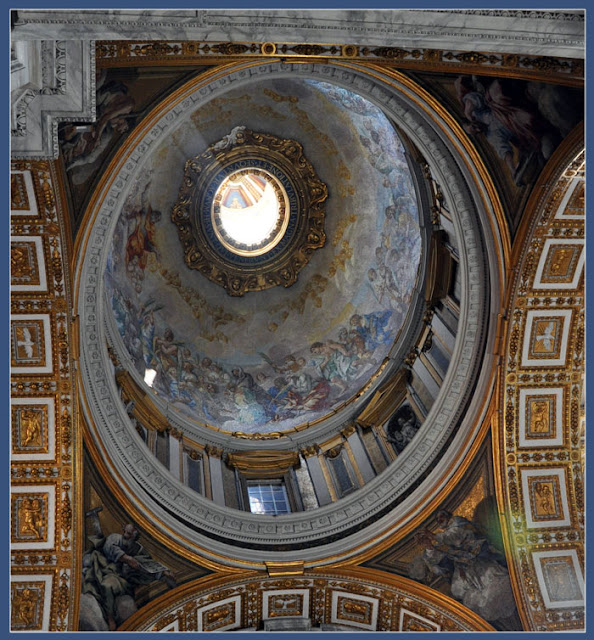 and further back you can see the fine detail in the ceiling surrounding the Dome. 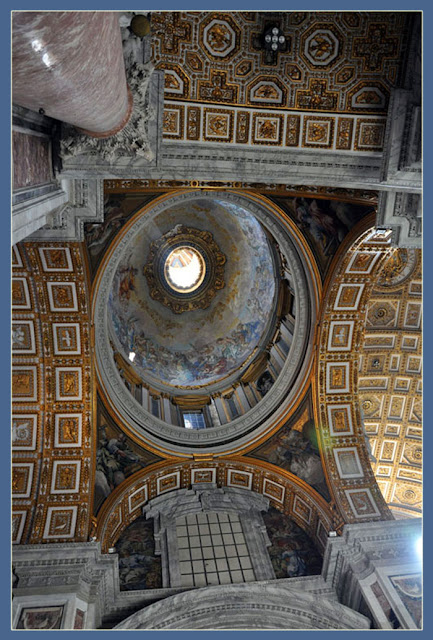 and below, peeking at the Dome and Coffered Ceilings at St Peter's Basilica: 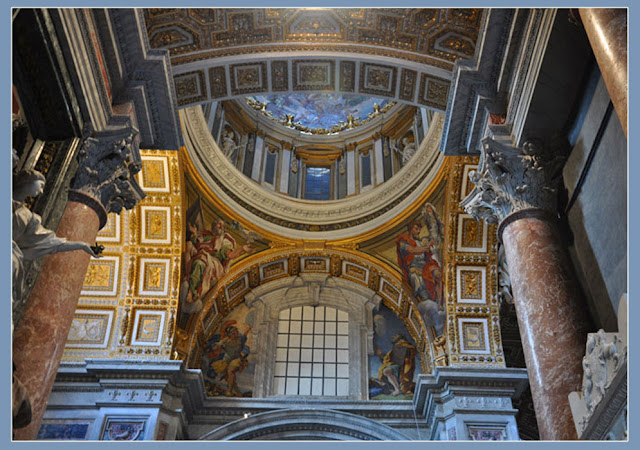 From looking at the ceilings, we then proceed to look at more altars and monuments within St Peter's Basilica... Known affectionately as "Good Pope John" and "the most beloved Pope in history" to many people, on September 3, 2000, John was declared "Blessed" by Pope John Paul II (who himself was also declared "Blessed" in 2011), the penultimate step on the road to sainthood. He was the first pope since Pope Pius X to receive this honor. Following his beatification, his body was moved from its original burial place in the grottoes below St Peter's Basilica to the Altar of St. Jerome and displayed for the veneration of the faithful. At the time, the body was observed to be extremely well preserved—a condition which the Church ascribes to embalming and the lack of air flow in his sealed triple coffin rather than to a miracle. 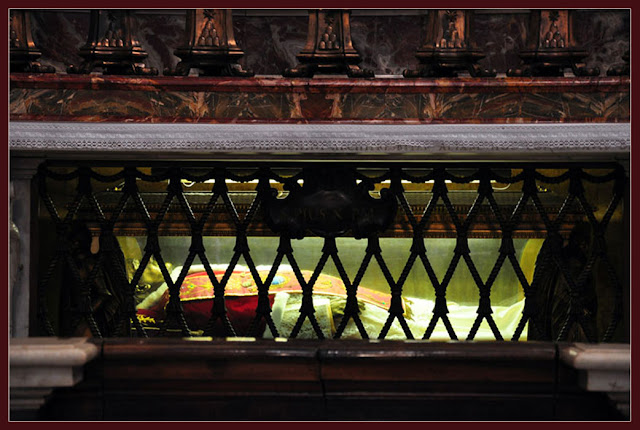 Before this (next image) altar was dedicated to St. Pius X, it was known as the altar of the Presentation of the Virgin Mary in the Temple. She is portrayed as a little girl joyfully going up the steps to the temple with her parents Anne and Joachim.
Below the altar, is a crystal coffin containing the body of St. Pius X (1904-1914), "pauper et dives, mitis et humilis corde". The body is dressed in pontifical robes, while the face and hands are covered with silver. The world greatly admired his wisdom and firm government. He helped restore Christian life by issuing wise laws on the religious education of children, youths and adults. His catechism gives clear answers to many religious questions. He allowed young children to take Communion, promoted the practice of daily communion as a source of virtue and holiness, he reformed the liturgy in the Missal and Breviary as well as sacred music and Gregorian chant. He fought against and condemned modernism which is still the cause of many evils. He was, however, unable to convince the reigning monarch and heads of state of his era to avoid the conflict that would shed blood throughout Europe for four long years. 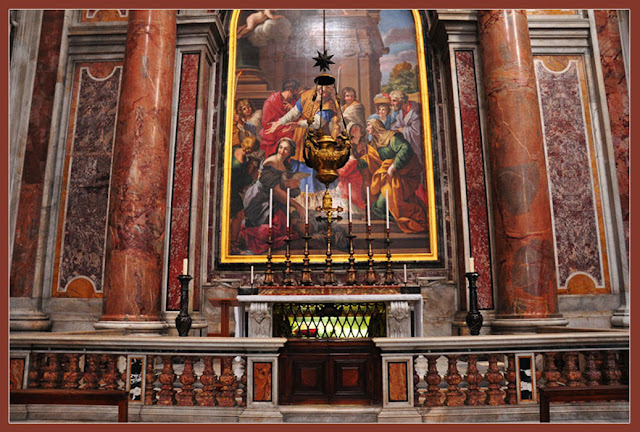 You can see further images (and information) in the
previous blog posting on our visit to St Peter's Basilica.
my other blog posts on Rome are:
1. arriving in Civitavecchia
2. the Colosseum

3. the Trevi Fountain
4. from Civitavecchia to Rome by bus and train


5. people watching in Rome
6. our first sighting of St Peter's Basilica
Time we moved on from St Peter's,
so stay tuned for further blog postings
on our recent cruise around the Mediterranean.
+++   +++

Hi,
Magnificent photo's, what an absolutely beautiful ceiling, they certainly don't do anything like that today.