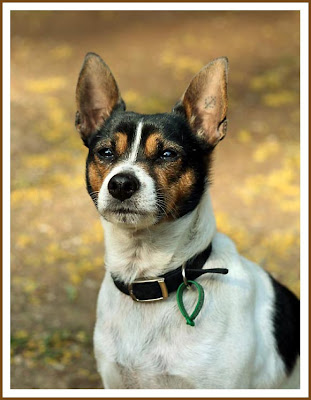 Pokey was born on January 2 1997 and Oscar on March 28 1998, they are brothers, though not 'litter brothers'. They have the same parents:

My brother Graeme and my sister-in-law, Julia, bred these Tenterfield Terriers for many years, we loved all their puppies, especially Nipper and Sugar.


The Tenterfield Terrier was developed by crossing the Standard Fox Terriers (Smooth) with the Manchester Black and Tan or English Toy Terriers (Black & Tan). At a later stage the Whippet was introduced. At one stage Chihuahua was used but any outcrossing to other breeds is now quite forbidden. Though the Tenterfield Terrier originated in England in the 1800's, it was developed into the type it is today in Australia, making it one of only a few truly Australian bred dogs. It is found nowhere else in the world. The breed is sometimes confused with the Jack Russell, However they are quite different.


When Pokey was born in 1997, Graeme and Julia offered him to us.

We were happy and so excited to receive such a beautiful little puppy as a gift. Then in 1998, along came Oscar. But sadly 5 days after he and his 3 siblings were born, Sugar 'passed away'.

Oscar was 55 grams in weight ....that is the weight of one medium sized egg!
Graeme and Julia were left with four of these little five day old puppies ......  what to do? Even the Vet said they would not survive.  But with the love and care devoted upon them (Julia taking them to work to feed during the day!) they survived ... each and everyone of them.

Yes, Oscar is a fighter and his true name is "Sugar Ray Robinson" and as with all four puppies, they were named after a famous 'fighter'.

He came home to us when he was just on 9 weeks of age. The following image is of Pokey being introduced to his "little brother", Oscar. 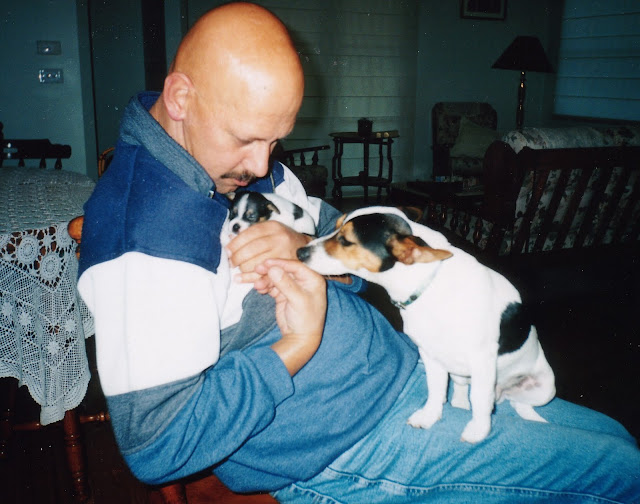 They got on so well, right from day one, Pokey took care of him ..... he showed him 'how to behave', what to do, where to go .... instinctively he knew that Oscar was a 'little puppy' that needed to be cared for. 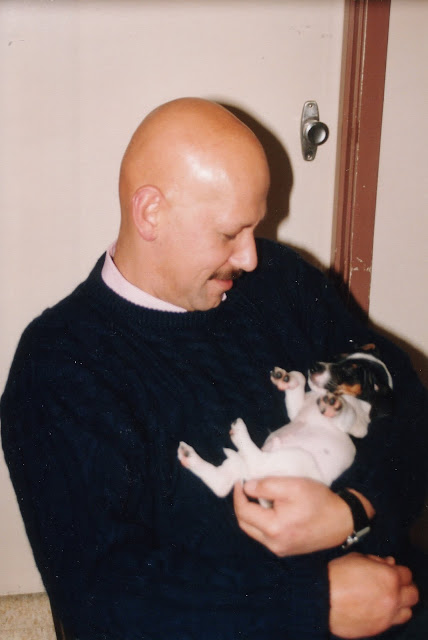 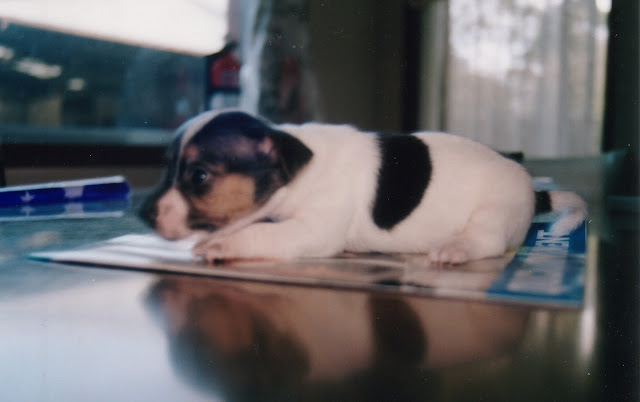 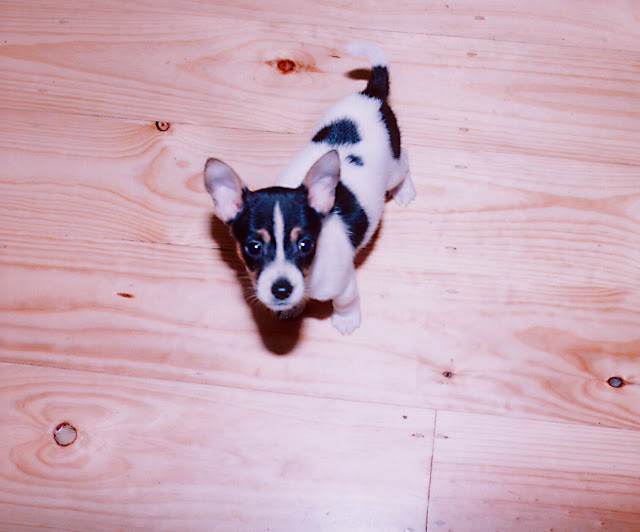 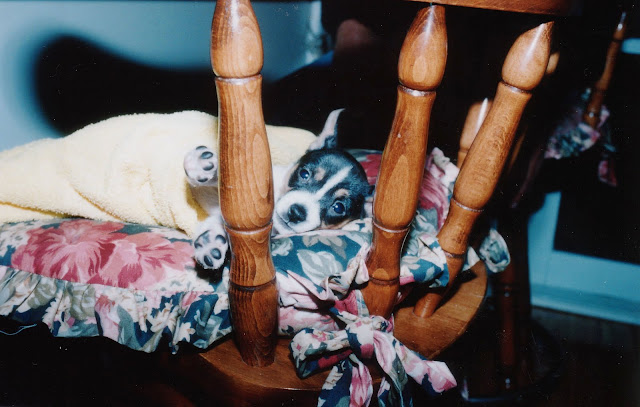 Remember, Oscar had no mother to show him how to 'behave', how to act like a 'dog'. But Pokey showed him and taught him so much .... as did Zac. Zac was Janines' dog (went to sleep in January 2009) the three of them were 'best pals' when they were all together.

Oscar followed their lead ... if Zac sat down and crossed his front paws, so did Oscar. It was amazing to watch their behaviour. When I see Oscar sitting with his paws crossed, I think of Zac. This is the three of them together in the back of the car ready to go to Blackwood for a weekend of lazing on the front balcony in the sun or chasing lizards around the backyard!! 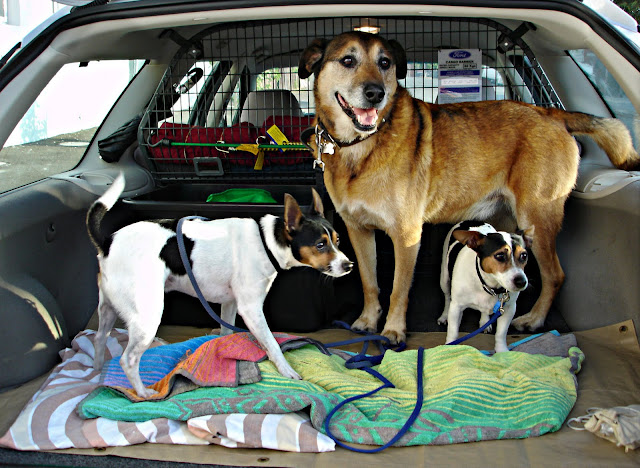 In 2002 we had 12 mths off to travel around Australia in our motorhome .....  it was a wonderful time with 'the boys'. We did 40,000 klm of seeing everything that was of interest to us and 'the boys' went everywhere we did ... each time we stopped and opened the door to the motorhome, they were excited and wagging their tales ....

what adventure awaited them outside 'that' door today? 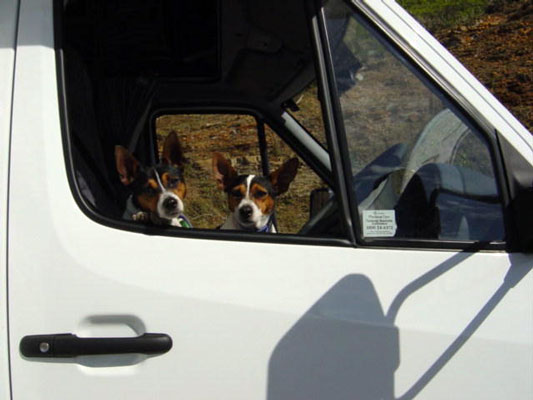 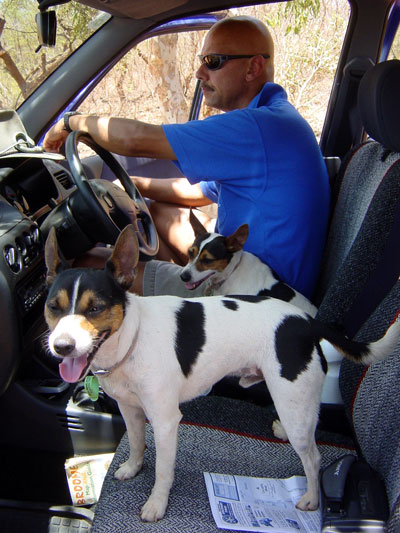 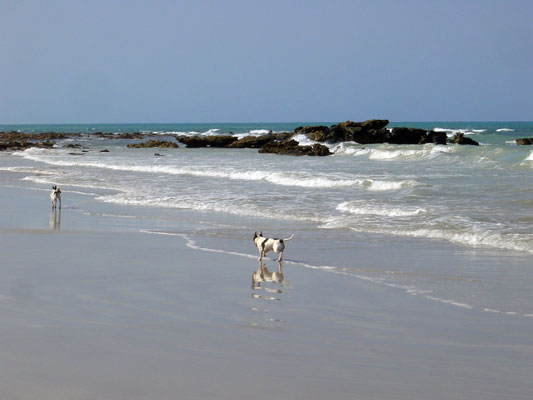 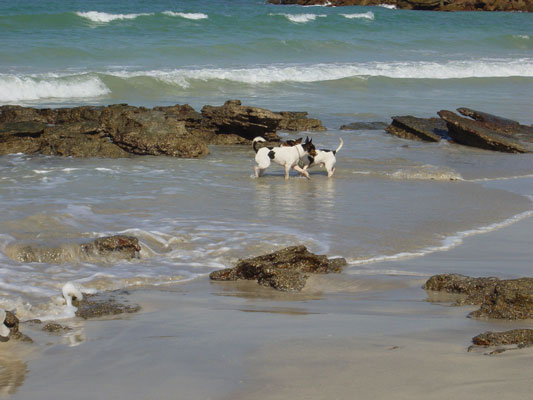 chasing the crabs in the rocks as above or hitching a ride on dad's shoulder when he was tired as below...... 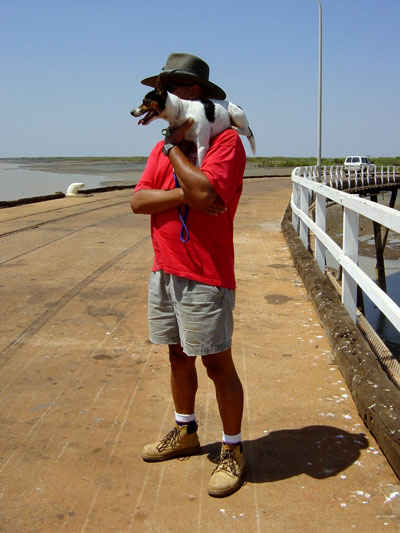 and what are brothers for but for him to hoist me up so I can see what is outside the window? 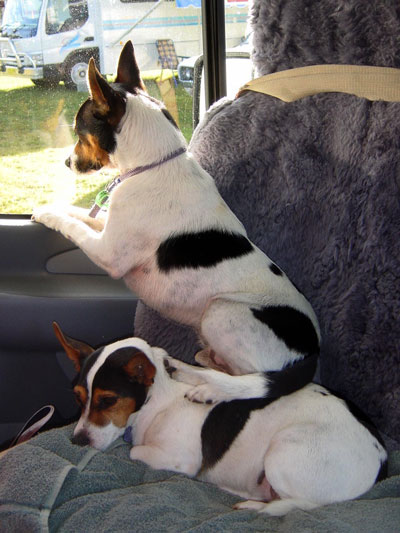 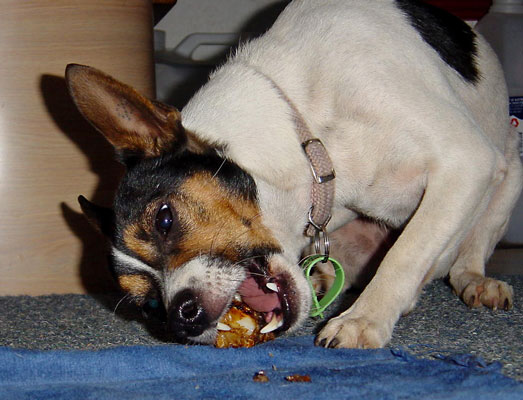 In January 2004, Oscar developed an infection in his left eye. They (Animal Eye Care in Melbourne, Australia) checked him thoroughly and found he also had an 'almost mature cataract' and decided that he was a good candidate for cataract surgery and that there was a 93% chance of success.

So we went ahead - on January 5 2004 - with the cataract surgery and a lens implant. That actually cost $2100.00AUD for those interested in this type of surgery, though this was seven years ago!

It was the best thing we did for him ..... it helped him enormously. He could actually see, and best of all the Vet told us even though he will go blind in the right eye (without further surgery) he will always be able to see with his left eye!

Seven years later, we now see the difference ourselves between his two eyes, obviously the cataract is now quite mature in his right eye. But he can still 'see' with his left eye.

In February 2007 John and I moved to Singapore ..... the boys stayed with Janine for the next month until we found somewhere to live .... 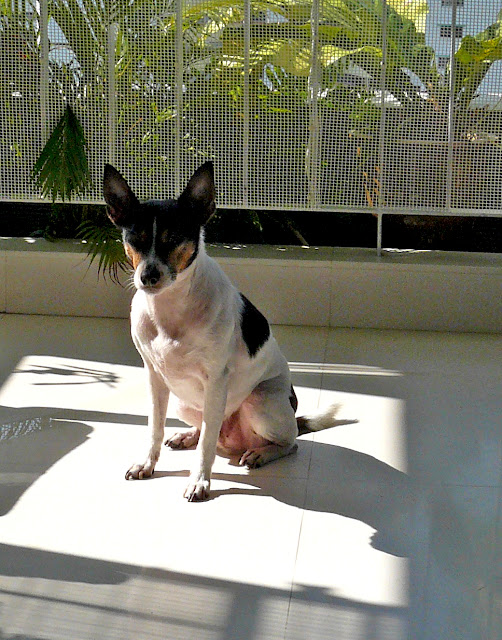 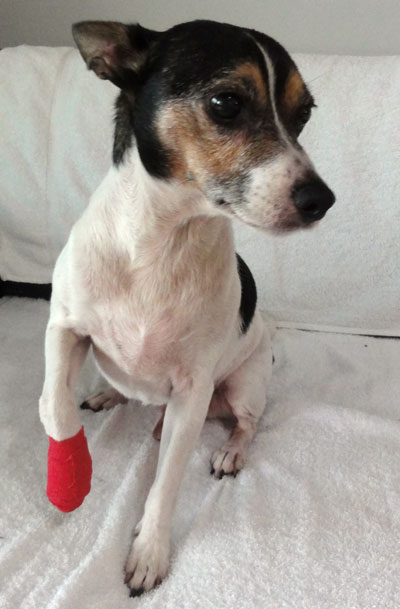 It has been hot here for them, they do not like the heavy rain, the lightning or the noise of the thunder. But we have helped them as much as we can to 'adjust'. But they have struggled.

But Pokey is no longer here and Oscar is grieving.
as seen in the following images below. 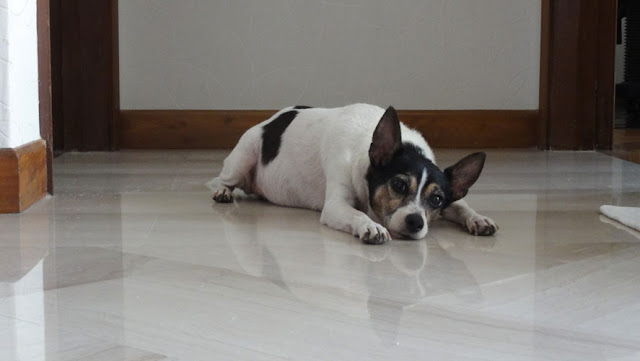 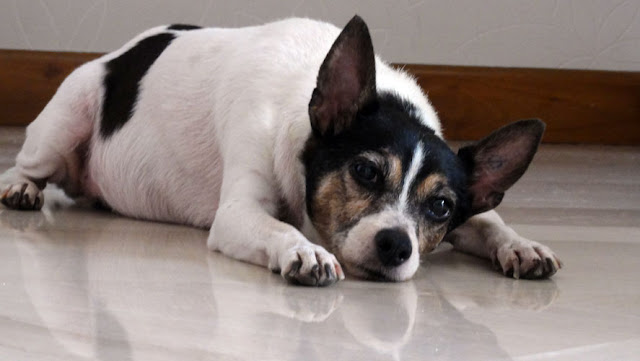 He is sniffing everywhere, looking for Pokey.
He puts his head right inside my bag and that is where I had Pokey's collar.
He goes to the mat where Pokey mostly slept and sniffs all around.

Then he comes to me for reassurance.
It is sad to see Oscar like this as we cannot 'explain' to him what has happened in his life.
We can only reassure him of our love.

He is not well either, he has serious liver problems and needs to go back to the Vet next Monday (July 11 2011) for more blood work and for the Vet to see how far advanced it is and what we can do. He has put on one kg in weight in the past 6 weeks which is not good for him and his heart. You can see by the above two images that his tummy is well extended now.

we fear we may have further decisions to make before the end of this year.

I think today he is a "little brighter" than yesterday, at least he is walking around and
not laying on the floor for hours on end like he did yesterday and seems to be
accepting that Pokey is no longer with us.
Oscar will hopefully be back to his happy self within the next few days
after all, he is our little fighter! 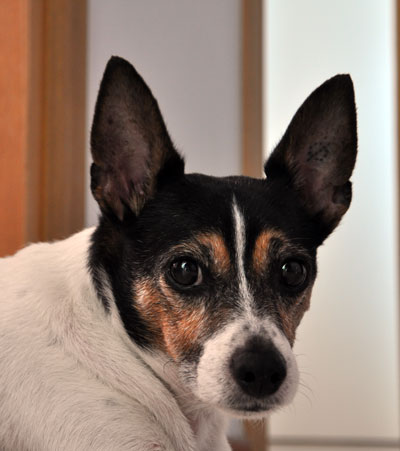 i felt really sad to know that Pokey was gone too.. but Oscar would be alright, with all the love that he has from you and your family!