Denali Star Train - on the way to Fairbanks

fabulous train journey, but if there was a 'next time' I would be taking the train all the way from Seward to Fairbanks. Rather than from Anchorage to Fairbanks. 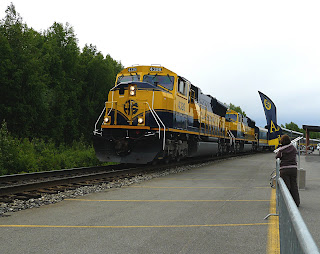 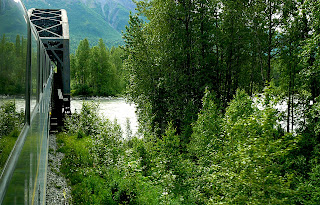 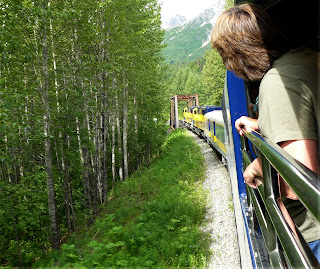 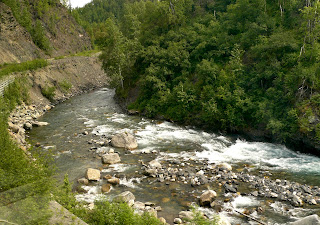 of course the above does not give a true indication of the train trip, nor does it give the viewer the experience of the scenery. Which is just superb. The above is a very small example only.

But I must add here, that if anyone is ever intending to take the Alaska Rail road, you have to be aware of the large tour companies that block book the train and or the carriages.

Very bad management and certainly does not help the individual traveler.

We booked our trip in February (for July) though we had started the planning thru the travel agent in the December of last year. But by February we were told that the Gold Class Seats have all gone. We booked and paid for the Adventure Class seat but enquired again a month later in case there was a cancellation for Gold Class ..... but was told again, all booked out and that we could only have Adventure Class. We were told this constantly, right up till the day we left on June 28.

Gold Class is the front carriage with the glass dome ceiling and viewing platform.

But little did we know that the large tour companies book all the seats - in case they need them - and we are (as in the individual traveler) are left with whatever we can get.

However upon arrival at the station in Anchorage, we were informed that there were “plenty of seats available”. Unfortunately we found that by obtaining the upgrade, we had to pay an extra $240 each. Given that we had already paid $194 each, the upgrade was an extra $240 (total $434 each) when a full Gold Class fare from Anchorage to Fairbanks (paid upfront) is only $304.

Something we did not count on...one the extra dollars and two, to be misinformed.

The large tour companies should not be able to book ALL the seats like that. When we first started our bookings - in the planning stage - we were told by the travel agent that we could not book until the February when all the time tables etc came out.....

we did exactly that and yet, still could not get the seats we wanted.

This also happened with the Maritime Highway Ferry, told over and over again that a cabin was not available .... yet when we arrived at the ferry terminal there were plenty, IF we paid another $400+ !!!!

So yes, a few nasty little surprises, but this is why I am adding it to my blog.........so others are not caught in the same situation.

next posting will be FAIRBANKS!!!