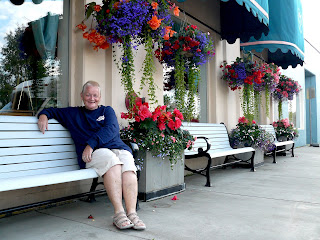 Well we left Denali National Park by train and arrived at Fairbanks on Saturday July 5, 2008. As pulled out of Denali, we saw some magnificent scenery as we followed the Nenana River..... just superb. We crossed quite a few bridges and smaller rivers or creeks, but by the time we were getting closer to Fairbanks the scenery changed to a forest of spruce trees with many birds flying around.

We stayed at The Bridgewater Hotel in Fairbanks, photo above is me sitting outside the hotel. There are many B + B's in town and I think it would be preferable to stay at one of these, rather than a hotel. We found it difficult to locate a restaurant or cafe in Fairbanks on a Sunday, everything seemed to be 'closed'. I hadn't done any research on that so was not prepared!

The visitors centre is amazing, so much to learn about and the people behind the counter are very helpful and friendly. There are many brochures to guide you with whats on in and around Fairbanks too.

Janine decided to have a wander around the town on the Sunday and I took the Paddle Wheeler Trip up the river ...... it was very expensive for the time allowed (just over 2 hours) but it was interesting to see the homes along the river bank. As seen below: 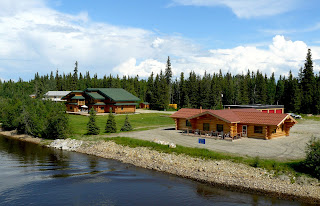 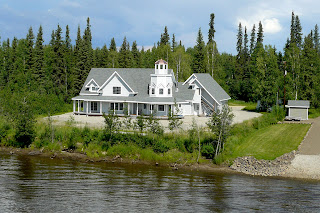 On the way back the sky looked threatening ....... but produced little rain. I think the cloud effect was more interesting than the talk / lecture that was going on in the ferry!! 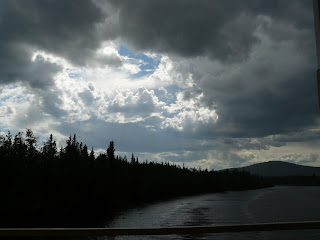 The scenery alongside the river bank was very green and full of tree's..... 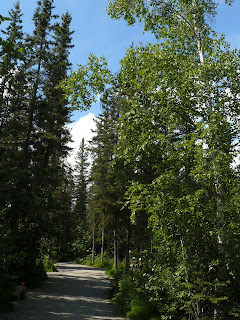 Just a couple of weeks after we left Fairbanks, they had a lot of rain and the river flooded ... many people had to be evacuated. So our timing was pretty good!!

We were very lucky with the weather while we were traveling, I think we only had one day with just a few spots of rain...... certainly not enough to worry about a jacket or an umbrella.

There were days that were VERY cold, and days that were just pleasant ......... some days it was a T Shirt day, others where a long sleeve was needed. Night time we needed a jacket and often a scarf and gloves.... so if anyone is going to Alaska during JULY ..... pack for all kinds of weather. It is very unpredictable!!

We spent 3 days in Fairbanks and on one of those days we headed up to the ARCTIC CIRCLE. ... on Monday July 7, we took a tour leaving Fairbanks at 6.00am.

But more about that particular day in the next exciting 'post' !!!!