a fabulous time to be living in Singapore, to experience all the festivities that go with celebrating the New Year.

This is, without a doubt, the most important festival of the Chinese lunar calendar. Also known as the Lunar New Year, this festive period lasts for 15 days and usually falls during the months of January and February. The whole island seems to stop to celebrate this special period, but the liveliest events, of course, are to be found at Chinatown.

The night before the first day of Chinese New Year, Chinese people all over Singapore make it a point to rush home for the annual family reunion dinner, which marks the start of a period of feasting. Chinese New Year cookies such as love letters and pineapple tarts (a Singapore-Malaysia invention), barbecued pork and sumptuous Chinese dinners are usually featured.

Another New Year specialty which originated in Singapore and Malaysia is yu sheng, or raw fish in a colourful bed of salad. The fish symbolises a prosperous life, and each colour in the salad brings a special significance as well. Yu sheng is not meant to be nibbled at demurely, you have to eat it with a whole bunch of people who will all dig in their chopsticks and toss the salad as high as possible. This noisy ritual is called lo hei, and is meant to bring you good health and luck for the rest of the year. 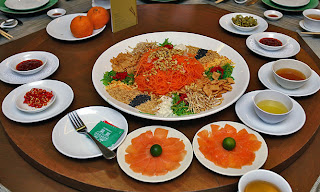 If you visit the home of your Chinese friends during this period, bring along a pair of mandarins as a token of good fortune. You will probably get hong baos in return; these are red packets containing money, and are, not surprisingly, kids' favourite part of Chinese New Year. Wish your hosts Gong Xi Fa Cai, it's the traditional greeting during the celebration and means you wish them lots of prosperity and good fortune.

In the weeks running up to Chinese New Year, Chinatown's the place to be. Colourful stalls line the streets, selling everything from red and gold greeting cards to love-letters cookies to pussy willow (a symbol of longevity). You'll smell incense and see little altars everywhere, as the Chinese make offerings to their gods.

Two other major events are held in Singapore in connection to Chinese New Year - the River Hong Bao Festival and the Chingay Parade.

The River Hong Bao Festival is an annual fair that takes place at the breezy waterfront area near Marina Promenade. The fair is usually built along the theme of the relevant Chinese zodiac symbol for that coming year. Expect huge floats depicting the animals of the Chinese zodiac, as well as huge statues of the Gods of Fortune and Wisdom, colourful temples and bridges, and "cherry blossom" trees everywhere. The stalls will feature the best in arts and crafts, Chinese calligraphy, and even palm reading, from Taiwan and China. Cultural performances will be held nightly.

You seem to know a lot more about Chinese New Year than most Chinese. As a Chinese from Singapore living overseas, it's not surprising to realize that many Chinese don't even know what Chinese New Year means..... Bravo. Probably, it's the same with every culture... :P