if you gotta sleep, you sleep where you can!!

We saw these workers having a lunch time nap on our "Southern Ridge Walk" yesterday: 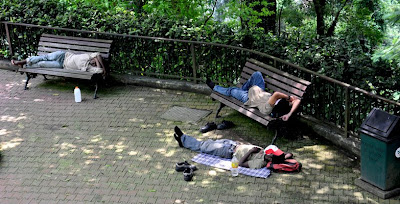 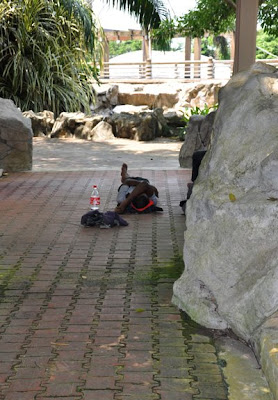 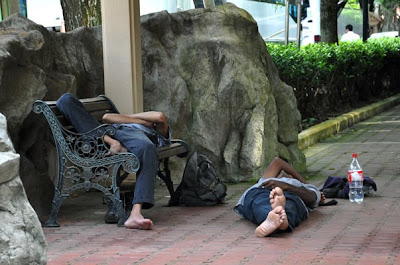 Manual laborers are often seen in Asian countries, having a nap where and when they can, they work long hours for very little ....... when we were in Vietnam last year, we went into a store and most of the sales staff were "resting" on furniture that was for sale!!

Some - here in Singapore - actually sleep under tree's or outside on the grass. In the news in December 2008 the following appeared:

"" A GROUP of 18 foreign workers spent the weekend sleeping under a tree in Jalan Kayu amid a dispute with their employers over pay.

The men, mainly from Bangladesh, camped in the open after leaving a Tuas dormitory on Friday. They claim they have not been paid for up to three months, which amounts to about $SGD900 to $SGD1,500 each. ""

These sort of disputes are constant and ongoing.

Most are brought to Singapore under the agreement that food and lodging is supplied. The accommodation that is supplied would not suit you or I. But standards differ to what you and I might agree upon and most of these foreign workers come to Singapore to earn what they can for their families "back home".

I am not saying that the above images are of these type of "foreign workers" ... the images I took yesterday are probably of gardeners from the parks and they are just napping in their lunch break.

The weather here in Singapore is hot and humid year round, and we all feel like a nap after lunch on many a day!!

I used to work in construction, and these sights are very common on any construction sites.

Not sure you believe that their accommodation costs more than their salary! Employers always try to avoid pay for accommodation as a result (not sure if it's legal or not). Some employers will pay these workers slightly better, and assume the higher rate will be used to pay for accommodations (sometimes it's really not enough). In many other cases, especially on construction site, the employers will build temporary housings on site for these workers, that will also include canteen. On most of my sites, the workers eat for free but the food ain't excellent (I think better than what the Army fed me when I was serving National Service). But sometimes, the employers asked the workers to pay if they want to eat (but not on my site).

And many of them take more than one job at a time (to supplement their tiny incomes). Especially for those workers who are not working on site, like maintenance workers etc. So if one employer provides accommodation, then, the other employers don't have to pay! So everyone simply just don't pay for accommodation.

Things could have changed.... so what I said below may not longer be valid: The employers cannot use the same standards on all of the workers. Malaysian workers are treated similarly to Singaporean workers, and they are paid much better. So they normally have sufficient money to rent a nice place. Indonesian workers tend to get better pay too, but lower than Malaysians, but good enough to rent on their own (except those who work as maids). Then, employers need to work to separate the workers from different countries to prevent any potential riots on construction sites.

Singaporeans have always find it hard to let the government build foreign workers housing in Singapore, mainly because of the property prices, and also the impact on the community.... It's a small island, as you all know.

Just some of my contributions and ideas, may not reflect what most Singaporeans think and feel, and I've been out of Singapore for quite sometime...