we have the odd tale or two to tell about the monkeys at Nongsa Village, one being about the pineapple! But this time our tale is about a monkey seen on our morning walk via Nongsa Point Marina and back to the village .....

We noticed one of the villa's at the Marina had washing hanging on the balcony - on clothes hangers - and a monkey was on the balcony pulling the clothes off and trying them on!

This wee little monkey tried to dress himself in these clothes but became very frustrated and just threw them over the balcony and then pulled another off the hanger and tried again.  He tried to pull a swimsuit over his head - and this is the one morning I did not have my camera with me.

He gave up once all the clothes were down and of he went .... but we now wonder what the guests in the villa must have thought when they eventually got up and found their clothes thrown over the balcony!!

But yesterday on our walk I made sure I had the camera and the following images were taken in Nongsa Village of the monkeys running around on the roof of the villa in front of us. If you look carefully you can actually see one of the babies being carried.

Seen here in this first image - the little patch of 'orange': 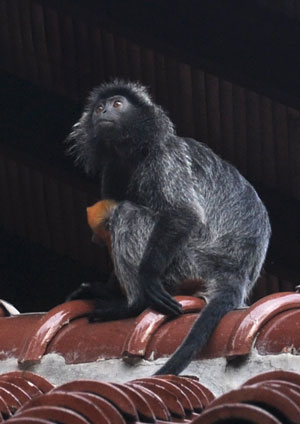 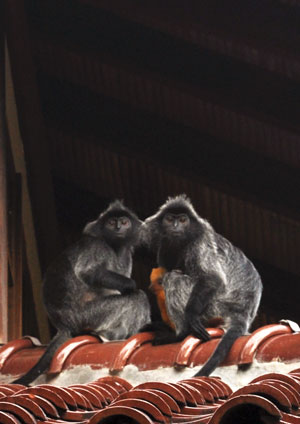 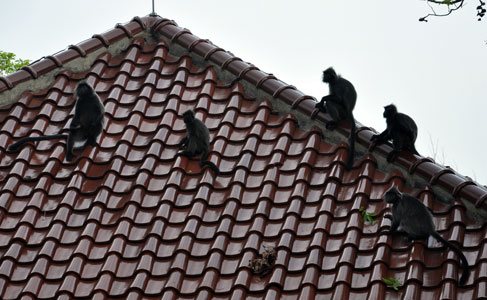 here they are running all over the roof and jumping from the roof to the tree! 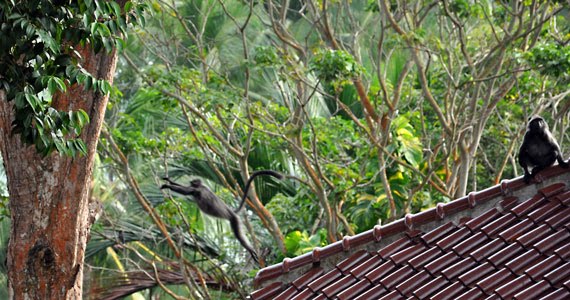 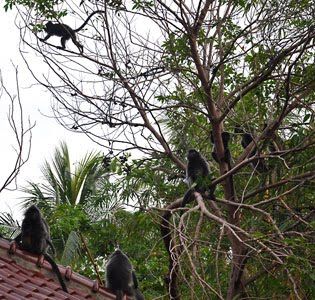 We do not leave food out on the table or benches, but they are becoming very clever at opening plastic containers. Which they did earlier in the week...... opened up the coffee bean container and the container of dried noodles ... all over the kitchen floor.

If you are not careful, they can also get into the bathroom and take the shampoo or soap. Am sure they have a fully set up little hideaway somewhere in the jungle - complete with all these lovely soaps, shampoo's, conditioners and maybe a hair brush or two!!!

Oh my gosh how FUNNY! I can't imagine seeing that - and doesn't it figure you wouldn't have your camera. Thanks for sharing this story :-) Loved it!

That is so funny! Great photos!! I can envision their little monkey house set up. When you start missing furniture I think you should follow the trail...