starting the first day of trekking in Sapa ......

We had a great couple of hours exploring the town of Sapa before setting off on our trekking experience with our guide and two H'mong ladies ...

* from Wikipedia:
The Hmong, are an Asian ethnic group from the mountainous regions of China, Vietnam, Laos, and Thailand. Hmong are also one of the sub-groups of the Miao ethnicity  in southern China. Hmong groups began a gradual southward migration in the 18th century due to political unrest and to find more arable land.

A number of Hmong people fought against the communist Pathet Lao during the Laotian Civil War. Hmong people were singled out for retribution when the Pathet Lao took over the Laotian government in 1975, and tens of thousands fled to Thailand seeking political asylum. Thousands of these refugees have resettled in Western countries since the late 1970s, mostly the United States but also in Australia, France, French Guiana, Canada, and South America. Others have been returned to Laos under United Nations-sponsored repatriation programs. Around 8,000 Hmong refugees remain in Thailand. 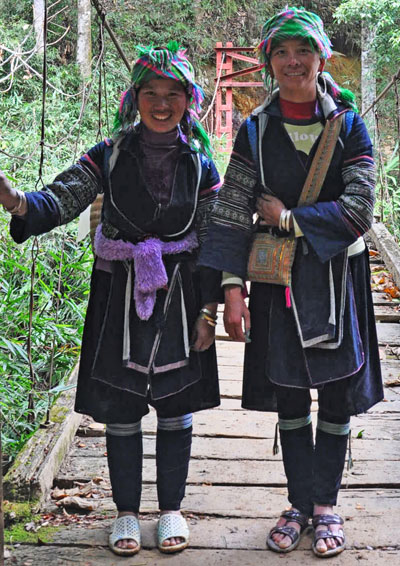 The two ladies that followed us were Mei and Cor (pronounced May and Kerr) and they were a God-Send to us .. they laughed and chatted with us and their English and command of the language was outstanding. When we asked where they had learned their English, they told us "from the tourists" ... they speak exceptionally well, yet neither can read or write!

They did not hound us in any way, they asked if we would purchase their trinkets and we said no, but they had to walk in the same direction as us to their own village, so they walked with us and helped us many times. I was very grateful for their companionship and their support!

As we walked out of the town early in the morning the weather was quite cool and very misty around the mountains ...... 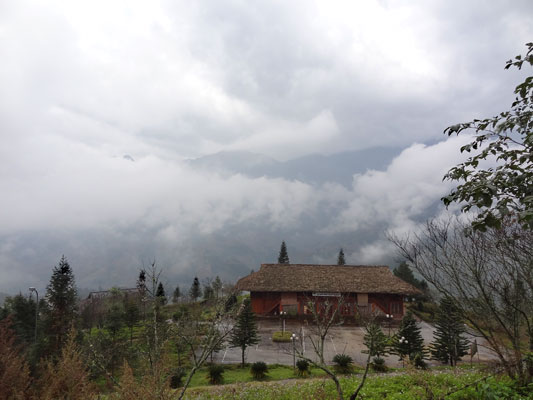 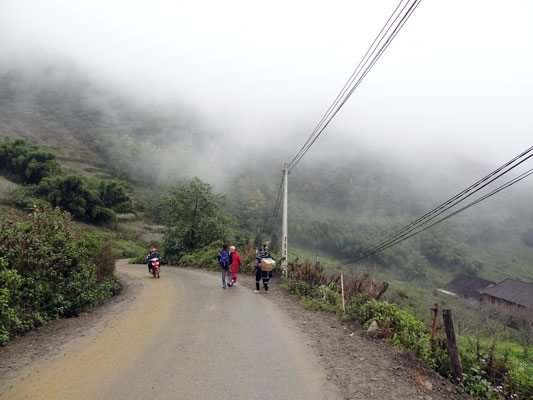 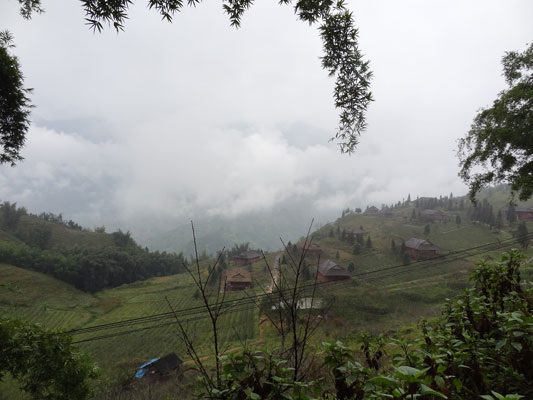 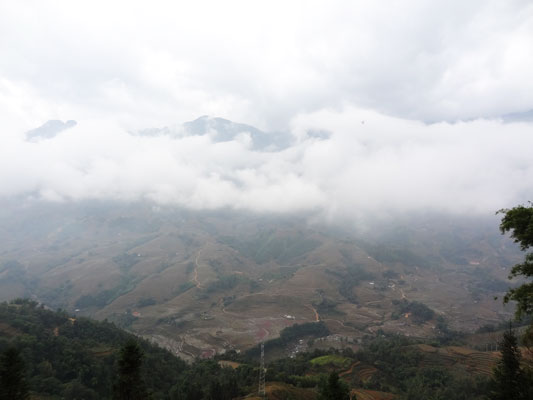 everywhere we looked, it was breathtaking and not one of the images wil do it justice! 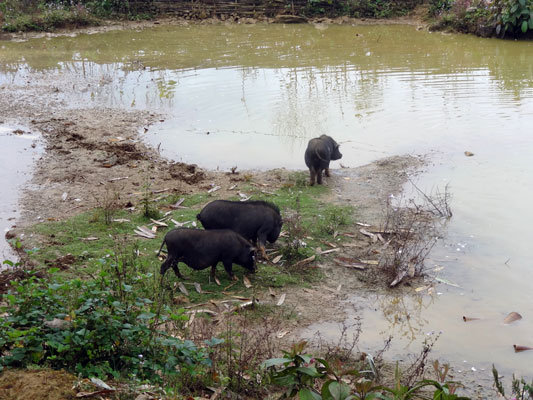 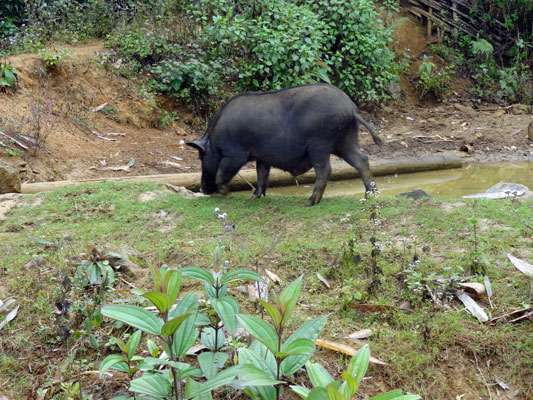 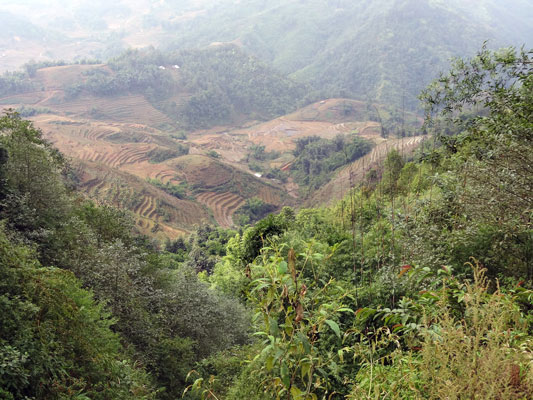 as we walked along the road, there were a few people that passed us ..... one in particular caught our eye. Just as she had passed us, her cell phone rang. It was a surprise to us to see one of the minority group ladies out in the middle of nowhere talking on a cell phone! 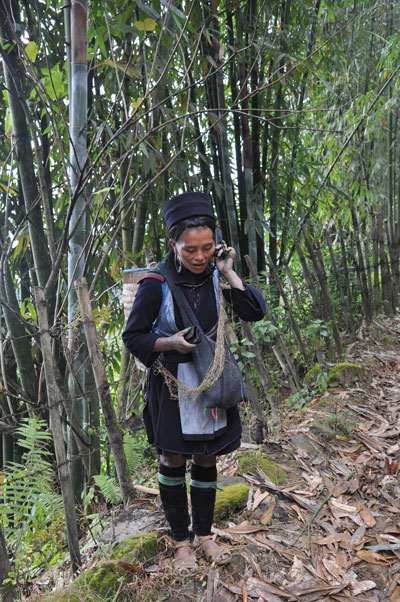 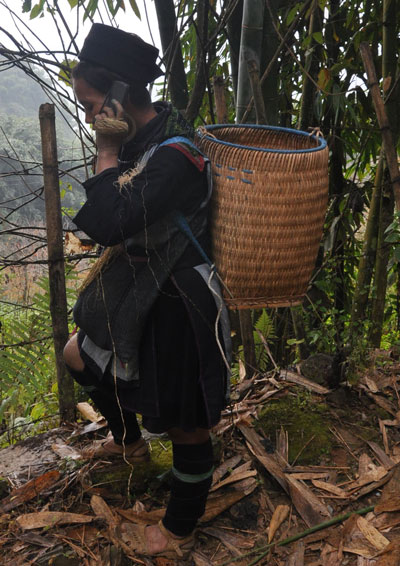 but communication is important to us all and the same goes with these ladies ...so we continued on our way ..... 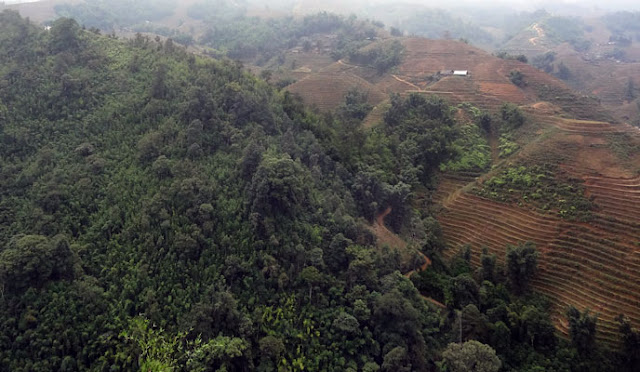 then our 'road' became a muddy track and as we looked up we saw this bend in the road .. 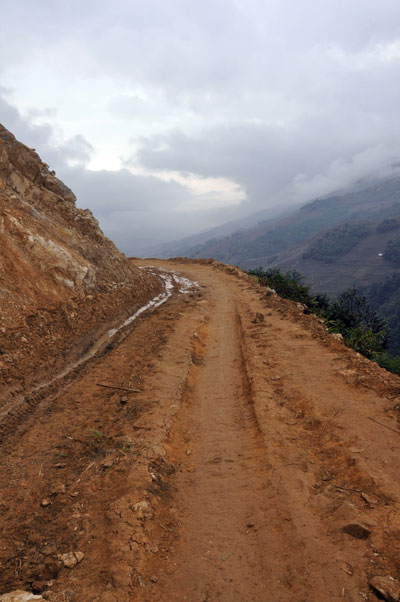 and stopped at the top to admire the scenery once again... 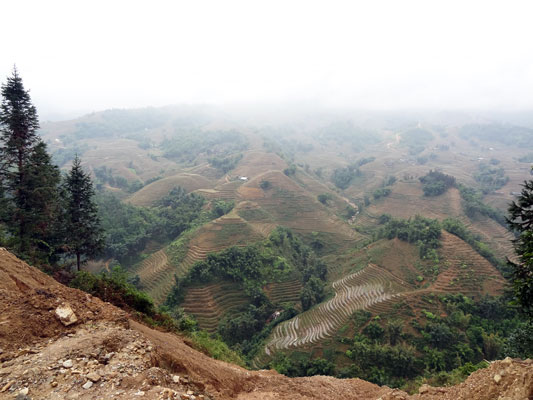 as we looked over the edge, we could see the river far below ...... 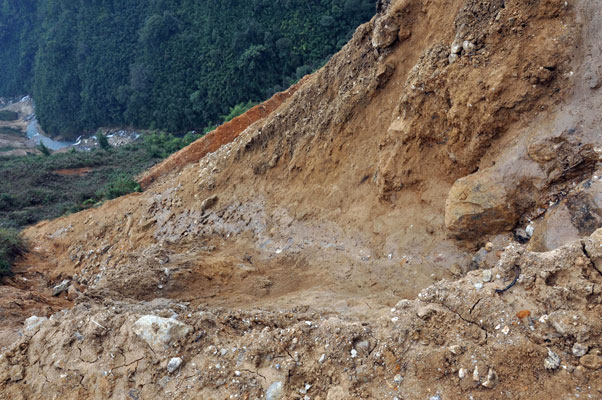 and this is when we were told that we would be going DOWN that steep slope to the river as seen here.

But with the help of the two H'mong ladies and a bit of encouragement from John and our guide, somehow I did it.....

we looked back to the top and saw a group of people also trying to decide if they would continue down or not.

They did not. They actually returned back to Sapa. 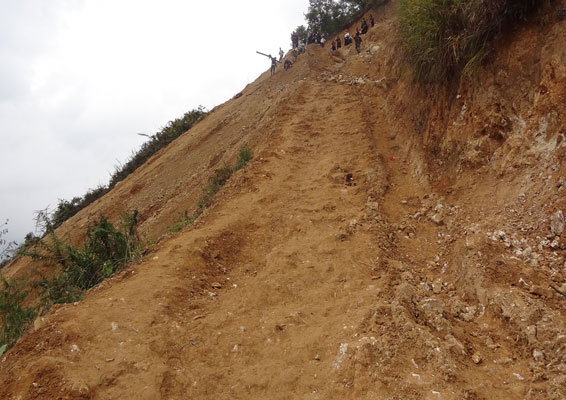 This was really just the start of the trek and by this stage I was wondering what was ahead of us. But we continued on down the mountain, across the valley and up the other side .... 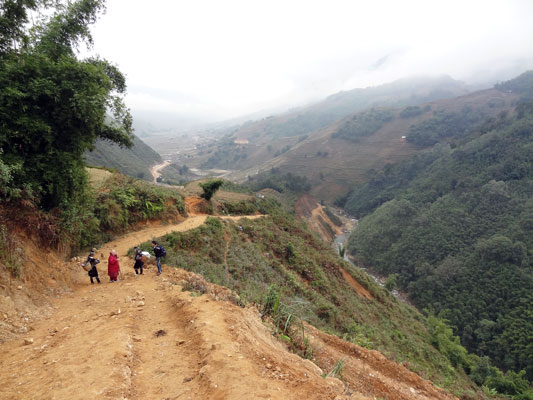 passing by some of the most amazing scenery...... 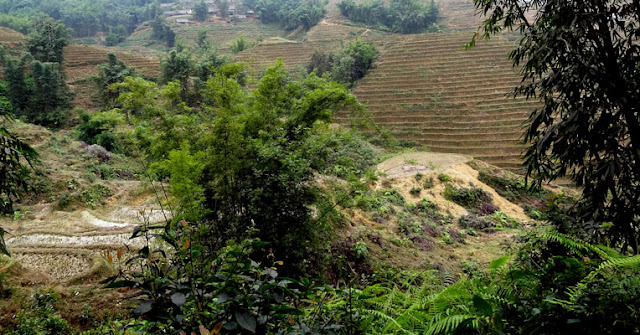 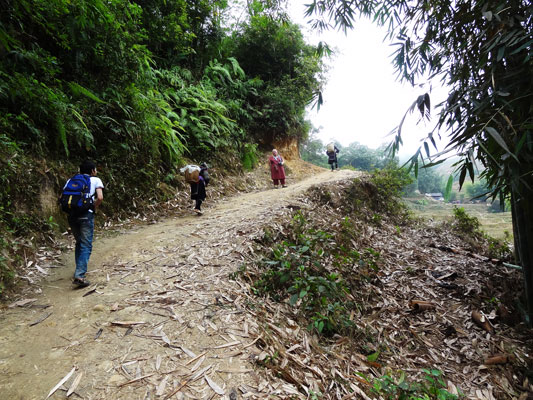 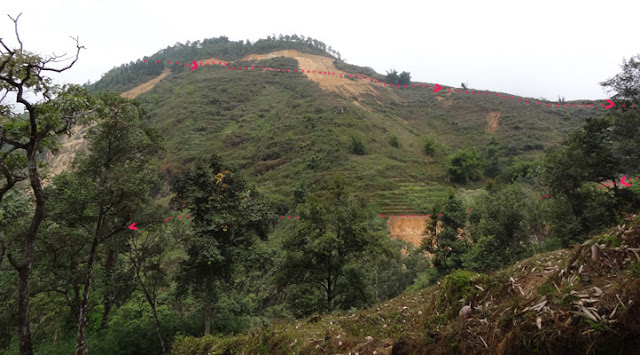 in the above image I have marked the track - in red - we had taken up till this point. 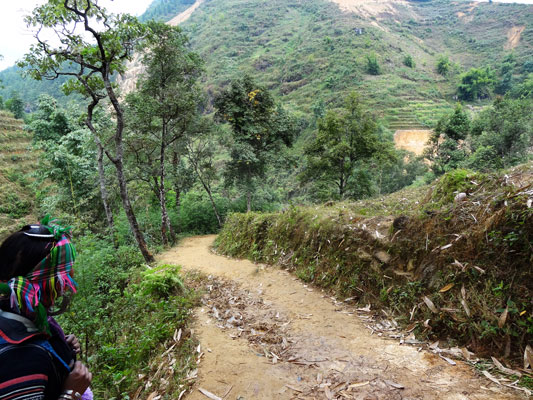 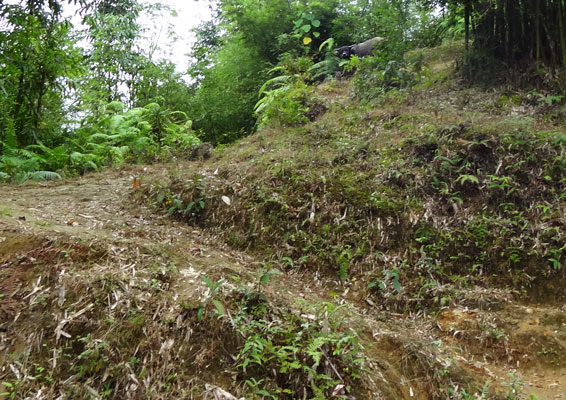 if you look closely in the above image (at the top) you will see the water buffalo that just stood there as we passed by it on the track. 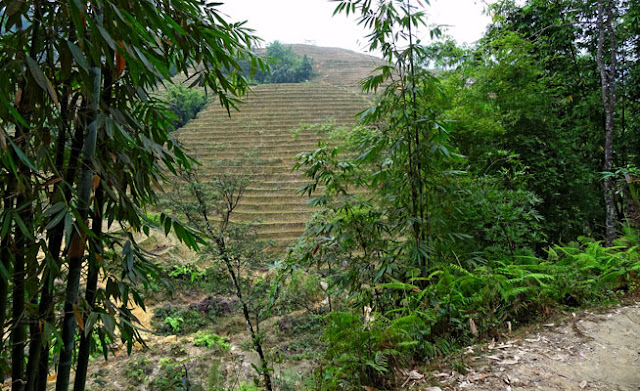 we managed to get past the  road machinary ..... somehow!!

I think this is where I fell as I was scrambling over the 'wheel track' to get past it. It looks easy here, but it wasn't! 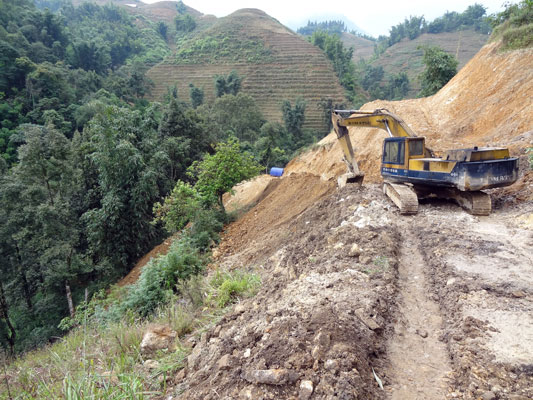 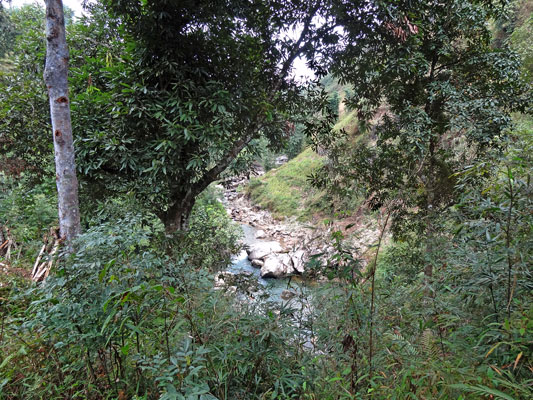 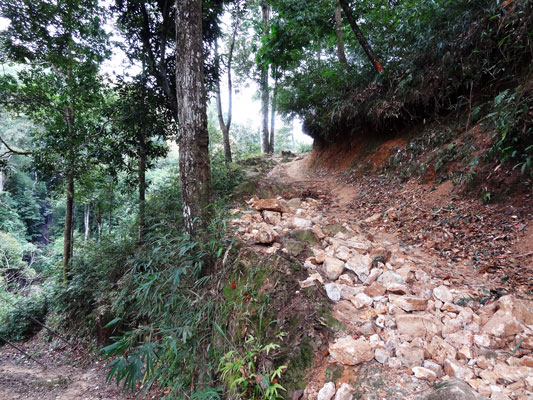 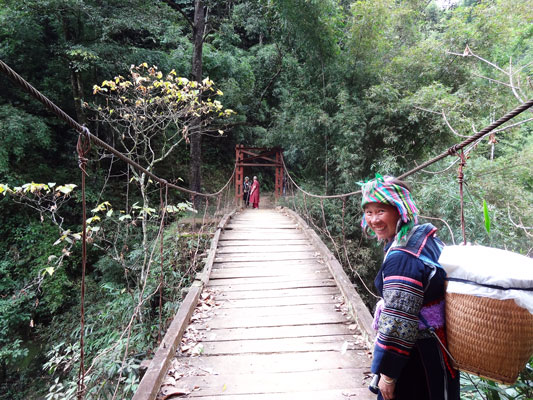 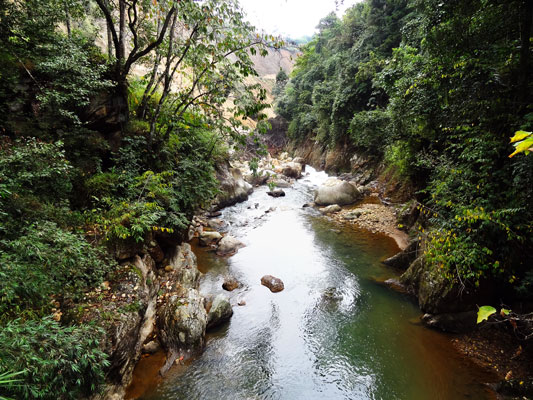 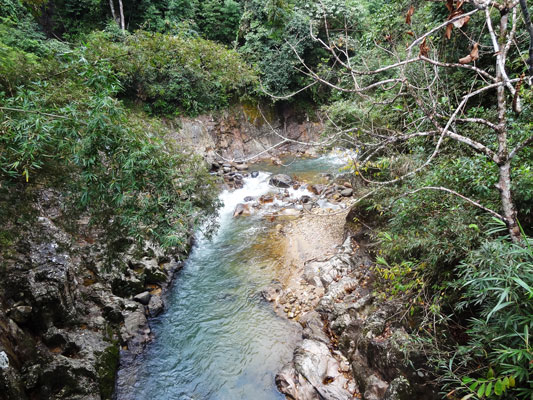 Other blog posts on our journey in and around Sapa, Hanoi and Halong Bay are as follows:

This is just one of the many blog posts of our visit to Hanoi and beyond.