a bit about the weather in Singapore !!

This first image is from our balcony looking towards the city area of Singapore ..... yes, it is there somewhere!!! 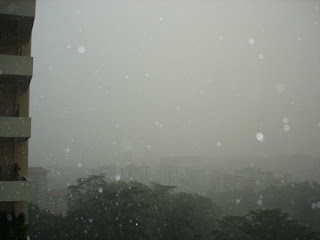 this image is looking towards Jurong East (west of us) on a fairly clear day...... 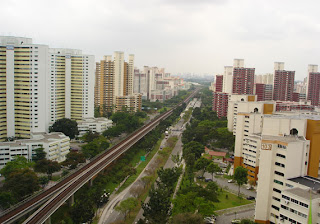 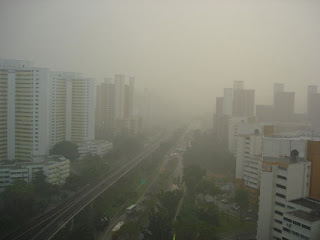 Today the temperature is 32 deg (89 deg F) with scattered clouds.

Tomorrow it is expected to be 31 deg (87 deg F) with 80% chance of precipitation - and definitely Thunderstorms!!!

There are 4 seasons in Singapore but two are really the "main" ones.
They are the Northeast Monsoon and the Southwest Monsoon Season, and in between two short inter-monsoon periods.

North-East Monsoon Season
Northeast winds sometimes reaching 20 km/hr. Cloudy climatic state covers from December and January with frequent afternoon rainfall. Occurrence of widespread moderate to hard rain lasts from 1 to 3 days at the extension. It is relatively drier in February until early March. Also normally windy from January to February.

Pre North-East Monsoon
Moderate to alterable winds with sea breezes in the afternoon. Also, thunder and rain in the late afternoon and early evening.

Singapore's climate is typically tropical, humid, and sometimes uncomfortable with the amount of rainfall. But you do get used to the tropics - eventually!

When I first arrived here I had the normal Australian (maybe Melbourne?) mentality of asking about "the weather", what is the temperature today or whats the weather tomorrow etc etc...

On the radio in the mornings, they may mention something like:

that's it folks - no further discussion - so now I am the one to find it strange when visitors ask me "what is the weather going to be today/tomorrow"??

HOT
That's all you need to know!

Loved this post...my parents STILL ask me what the weather is like whenever I talk to them! I might direct them to your very informative post! =)

am sure you already know that when you live in Singapore - you do have a constant stream of "visitors" and I am always being asked "what is the weather like when we are there?"

In the past - as a visitor - I would probably have asked as well, but now I am so over it!!