taking the bus from Singapore to Johor Bahru

To take a "coach" as opposed to the local bus, one needs to take the MRT all the way to Lavender (not pronounced as in the flower, but as LAV-END-DOOR the emphasis on the LAV!) and catch the coach from there, for us that would mean at least 1.5 hours extra. So we take the train from Bukit Batok MRT to Kranji MRT. This takes about 10 minutes.

We alight at Kranji and step outside where we see bus 170 immediately, well perhaps what we actually see is the very long line of people waiting for bus 170 - as seen here: 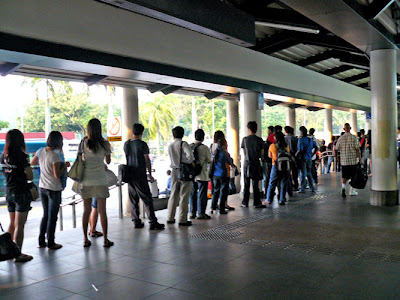 Last week was the same, long lines of people waiting for bus 170 which actually starts from in the city and picks up passengers along the way until it reaches Kranji Rail Station and then continues on to the Larkin Bus Terminal in JB. The bus becomes over crowded to put it mildly. There would be at least 60 people on any one bus. 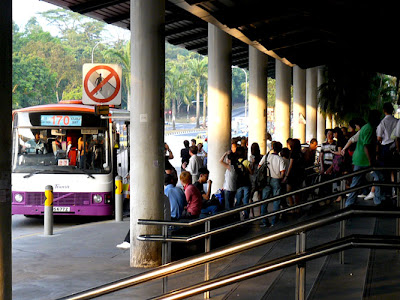 It is a very cheap way to get across to Johor Bahru, barely $2.00. But we have now decided it really is far too stressful to leave at 6.00pm. Too many people pushing and shoving. There are many people that live in JB and work in Singapore, hence the buses being so busy and overloaded. 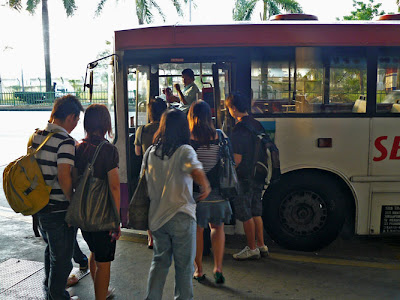 It was a madhouse, they are bad enough on the MRT lines at any time of the day with all the pushing and shoving but the bus trip across to JB late on a Friday, it is much worse!!!

I do realise that everyone wants to "get home" adding to it is that is that it is a Friday night and it being a hot Friday night made it so much worse. Everyone was fairly OK until we passed thru immigration on the Singapore side, then there were hundreds (and I mean hundreds) of people trying to get on all the buses to go across the causeway...... last Friday night there was quite a wait for the 170 and many people started 'jumping the queue' and pushing their way to the front. It was very annoying to say the least....

others were making excuses to say they "had to go to the toilet" ..... what a load of garbage, they just wanted to be at the front of the queue!

The 'rows' for each bus queue is NOT clearly marked, especially when there are so many people everywhere it is difficult to know which 'lane' or 'row' you should be in. We had difficulty too, though we had been there the previous week, so had an idea of the area we were supposed to be in.

I watched these two young women trying to find the queue they should be in, they looked bewildered, looking here and there, they must have been visitors too ..... people were not offering to help or advise them, they were quite lost. Unfortunately it looked as though they were going to 'queue jump', when I think they were just trying to get to the front to ask someone for help......

anyway, this 'man' pushed them aside and started yelling at them, he kept pushing them out of the way and was very aggressive and abusive towards them.

No one helped, they were very frightened and moved away. John and I were horrified, but not surprised by this behaviour. This area that the buses pull into to pick up the passengers after going thru immigration, needs to be addressed and made safe and secure for all travelers.

It is a mess, obviously it is a simple process during the non busy part of the day, but on a Friday night when it is so busy....

We eventually take the bus across the causeway and go thru the customs and immigration on the Malaysian side. On leaving we were not looking forward to standing in the queue again for the next 170 bus to get us into JB.

But it was such a relief to see the area on the Malaysian side for the bus to pull into. No pushing, no shoving, no queue's, just a nice, quiet and orderly area to wait as seen here: 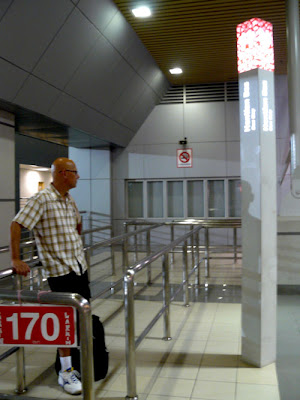 and to give you an idea of timing, the whole trip last week from our home in Bukit Batok to the hotel in JB took 1.5 hours, this week it was over 2.5 hours. Leaving earlier must be the secret!


PS:
please read new posting dated July 09 2009 of the same bus trip (so much easier!) on a week day by clicking here:

Going from Singapore to City Square Shopping Mall at JB:

From and to Singapore

The Transtar Cross Border Service TS8 double-decker bus plies between Resorts World at Sentosa (RWS) and Johor Bahru. The bus call at 6 stops along its route. The service also terminate at Kotaraya II Terminal in Johor Bahru. Fares are set lower, at S$5 for adults from RWS to JB, and S$2.50 for children. From JB, adults will pay RM5 and children, RM2.50. For boarding at the other points along the route, adults can expect to pay between S$3-S$4, whereas child fares are between S$1.50-S$2. Passengers can choose to pay using their EzLink cards or with cash. From RWS, the first bus will leave at 8am (Mon-Sat) or 9am (Sun) with the last one at 11pm (Mon-Fri) or 1am (Sat-Sun). From Kotaraya II Terminal, the first bus departs at 5.45am (Mon-Sat) or 6.15am (Sun) and the last bus at 9.45 (Mon-Fri) or 10.45pm (Sat-Sun). Service TS8 will run at a frequency of every 1 or2 hrs. The bus calls at 6 stops in Singapore (excluding Woodlands Checkpoint) along its route.


The Advance Coach AC7 bus service was launched in Dec 2010. The bus runs between Yishun bus interchange in Singapore and Kotaraya II terminal in Johor Baru. It makes numerous stops enroute between Yishun bus interchange and the Woodlands checkpoint. The frequency is 20 to 30 minutes, from 5.45am 11.30pm (Singapore to Johor Bahru) or 5am and 11.50pm (Johor Bahru to Singapore). The bus fare is a flat $2 (if you board the bus anywhere in Singapore) or 2RM (if you board the bus in Johor Bahru).

Coming from Singapore, I despise such behavior, especially driving in Singapore.... just the other day, my in-laws told me that a man died from heart attack after getting angry over a very small issue: Someone was washing his car and accidentally splashed some water onto his, this man rushed over and he shouted at the other man, and after an exchange of words, this guy collapsed and died on the spot. I hope Singaporeans can cool down their heads and enjoy their lives, rather than chasing around for things that don't matter at all! I was usually one of those who gave ways, helped others (not to boast about anything).... but was treated like a weird animal... glad you guys are putting this on your blog...

Would love to your trip to Melacca... I haven't been back since 2001.... a whole 8 years away from Singapore and Malaysia! I used to do the same trip like you guys, took a bus to JB, then to Melacca, Seremban, K.L., Butterworth, Penang, Langkawi, then into Thailand.... it took me 1.5 months (while I was still a student). Enjoy your trip!

After passing the immigration in Singapore... just walk over! Thats what i usually do if the buses are so crowded.. takes you maybe 20 minutes and you safe a lot of trouble...

Hope your next trip will be better :)

I hear that people are no longer able to 'walk across' ..... maybe something to do with the new checkpoint on the Malaysian side?

We have been over a few times before, but gotta admit, last Friday was a nightmare!!!

Yes, that's correct. You can no longer walk across.

However, there are many ways to hop onto the bus 170. One way to bypass the Kranji rush to some extent is to take a cab to Woodlands Checkpoint, leg it pass the immigration then wait for the bus immediately after the checkpoint.

I would say the key to crossing the JB-Singapore border is timing. In the morning from 8 - 9 is a madhouse from JB to Singapore. The reverse is true from 5 onwards. Weekends are also pretty bad. Apart from these times, the traffic is usually pretty good.

Thanks Khayce for that.... I had a feeling you could no longer 'walk across'!

I think the bus (170) from Kranji was OK, even though it really was very crowded .... it was the behavior of the passengers waiting for the bus after going thru the Woodlands Checkpoint that was really quite scary. I will not even publish the images I took on my blog. It really was frightening for everyone.

You are right though, the timing is the key!!

i not so really know about local bus, but for express bus can get know from www.easibook.com, malaysiatravel.com provide travel information.

for those (tourists) that are staying in Singapore Centre area or live in the Orchard Rd area .... it is easier to go by bus from Queen St Interchange ..... but for those that live on the West Coast (Jurong / Bukit Batok / Boon Lay etc) then it is far easier to go via Kranji MRT and Bus 170.

Was in JB again today and the above trip took no longer than 45 minutes and that includes waiting time for the bus.

Hi there. I just wanna ask how can we board the bus 170 from changgi airport? We'll be coming to SG on February and will head to KL upon arriving SG. Thanks in advance!

From KRANJI take BUS 170 across to JB according to the above blog posting. All up this will take about 1.5 hours from Changi..

At Changi MRT station ask for a small MRT map ... it will be helpful for you to follow the stops. They are issued free.

There are quicker ways to get there, but the above would be the EASIEST if you have not been to Singapore before.

You can also get the bus 170 from QUEEN STREET, which is near the BUGIS MRT ..... from Changi Airport it is only 9 stops on the train and then you would walk to Queens St and catch bus 170 from there .... but you would have to ask directions from BUGIS MRT .... there are too many exits from the station and it would be confusing if I tried to explain to you.

link to me via FB or email me if you have difficulty in following these directions!

am wondering why you are going to JB from Changi, are you intending to stay sometime in JB before heading up to KL?

much easier for you.... though, if you have not been to Singapore before, you really need to spend some time on the "Little Red Dot"!

you missed out the Golden Mile Complex where most of the companies providing coach services from singapore to malaysia/thailand are located there, the price definitely more competitive.

There are many ways to cross to JB ..... You can go to the Queen St interchange if you are in that 'actual area' .... But for those further out like the West Coast or East Coast then it is better for you to check the GoThere.sg website for directions!!

boyen71 .... To go from Melin Manion to Woodlands Checkpoint the easiest (and cheapest) is to walk to Still Rd to bus stop number 83301 and board bus number 966.

Alight at Marsling MRT (19 stops later) and take bus number 856 to the checkpoint.

Total cost will be $1.80 and will take you approximate one hour.

From the first checkpoint (immigration) follow the above directions in the blog posting.

We are arriving to Singapore this March 26 at 12:45am. We are going to stay in Woodlands. On the same day, We plan to go to Kuala Lumpur early in the morning by train or bus,pls. help us which is better and cheaper and how/what are we going to do. Thank you very much!