the road from Marmaris to Bozburan in Turkey

After our arrival into Marmaris, we hired a car for the day with a couple of friends. It is an excellent way of getting around the area and seeing a lot more than if we had done one of the 'local tours'.


Our drive took us all around the the Loryma Peninsula, though that depends on who you are speaking with or what map you are looking at ..... the Loryma Peninsula may also be called Hisaronu, or Bozburun Peninsula. Either way, this peninsula spans south westwards from Marmaris, crossing hills and mountains that hold villages and views and many kilometre's of dramatic coastline. 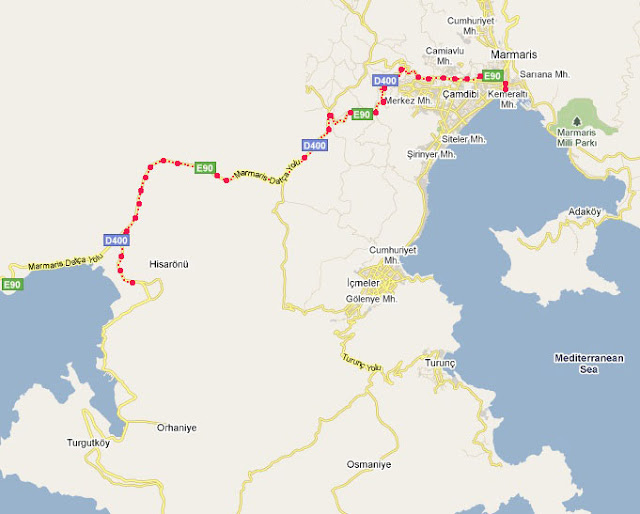 To get to this peninsula you need to leave Marmaris via the main highway, called the D400, in the direction of Datca. About 13 miles (21km) west of Marmaris you take the southern road, leaving the main highway and heading for Orhaniye and Selimiye, driving past the popular resort town of Hisaronu.


You can see in the following image taken from "Google Earth" how mountainous this area is. The two arrows represent the town of Marmaris (red) at the top, then the town of Bozburun (pink) down on the lower left.


We travelled between these two points, over most of this peninsula and saw some amazing sights. 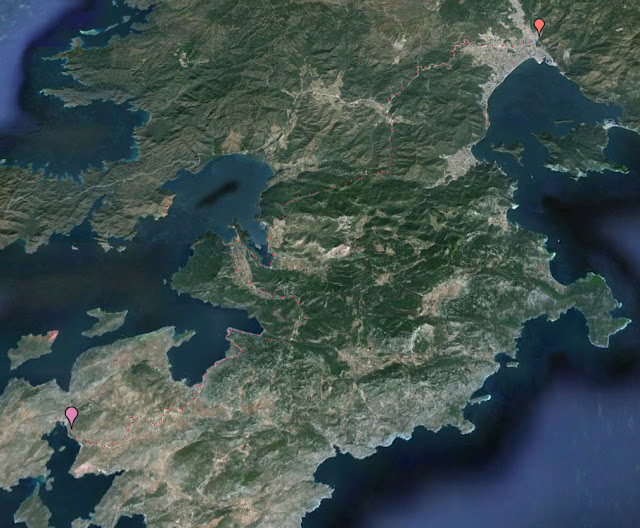 as we travel up towards the mountain we pass through some beautiful countryside, then from quite a distance we can look back on Marmaris and see the MSC Splendida in port! 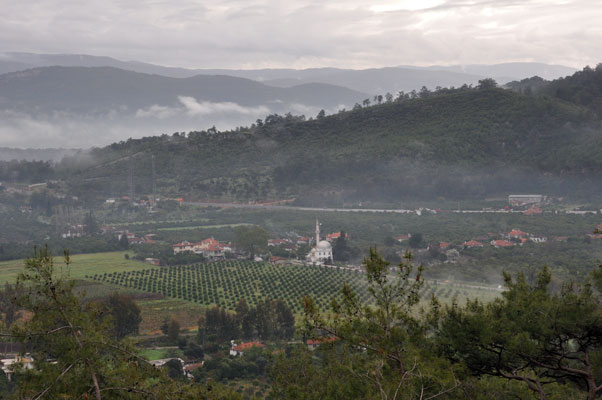 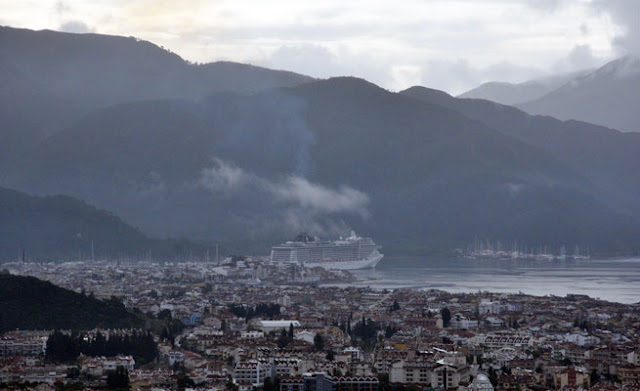 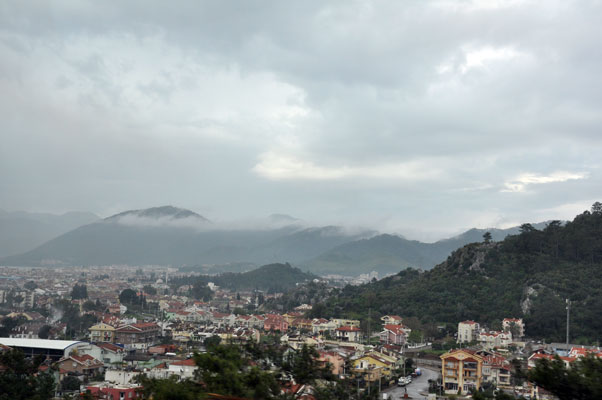 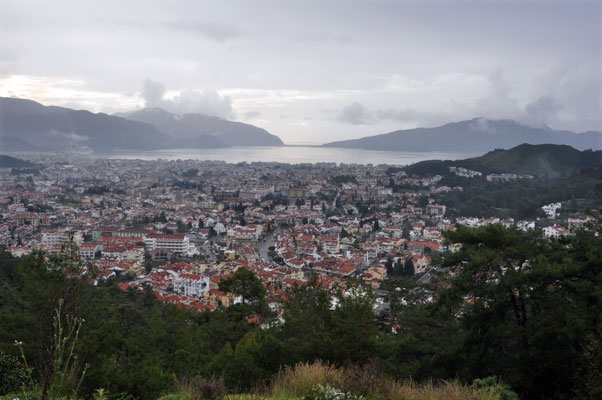 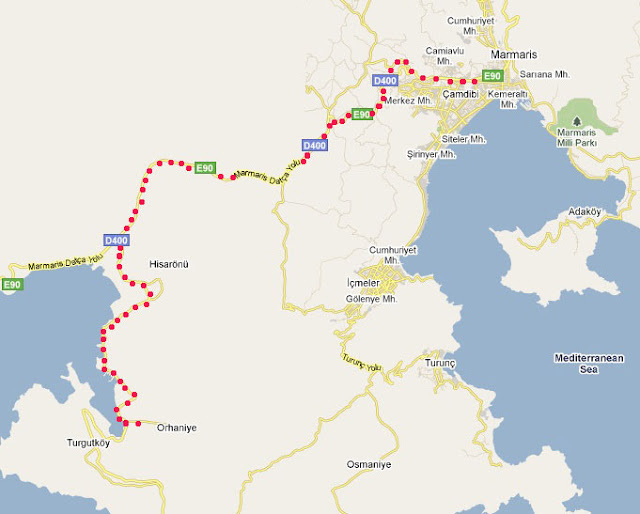 Orhaniye is the next village along from Hisaronu, just a 10 minute drive, or a short Dolmus (local bus) hop away and home to the modern Marti Marina.

A popular stop on many boat tours of the Peninsula. Orhaniye is also home to a low sand spit which means you can walk through the water up to your ankles. The bay is marked on maps as ‘Keçibükü’ or Goat Bay, but is referred to locally as ‘Kızkumu', meaning Maiden's Sands…Legend has it that a girl who wanted to meet with her lover put some sand in the hem of her skirt and planned to fill the sea with this sand to get to her lover. However, there was not enough sand and she drowned. 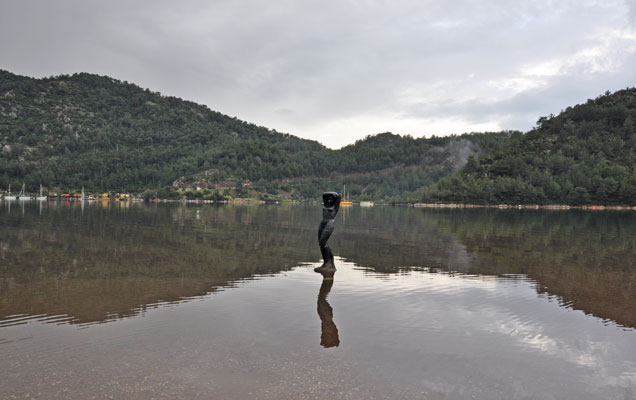 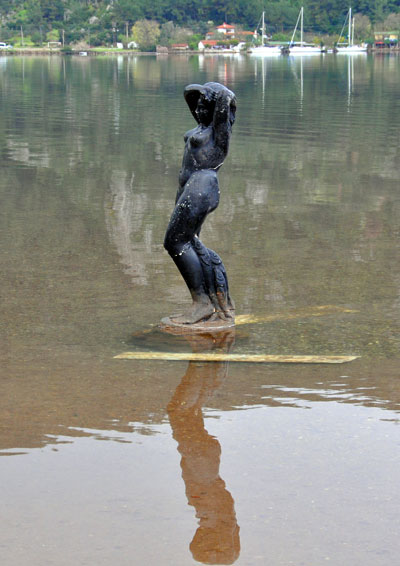 In the middle of the cove is an island, home to the ruins of a castle, believed to belong to the ancient city of Baybassos. You can visit the island by hiring a ‘caique’ (small boat) and then following the path to the castle. At the top you’ll be rewarded for your efforts with a beautiful view. 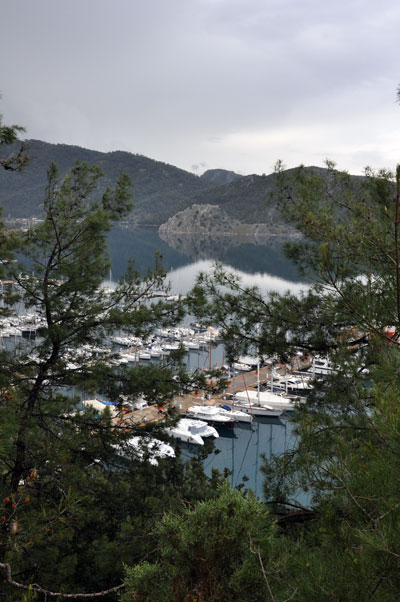 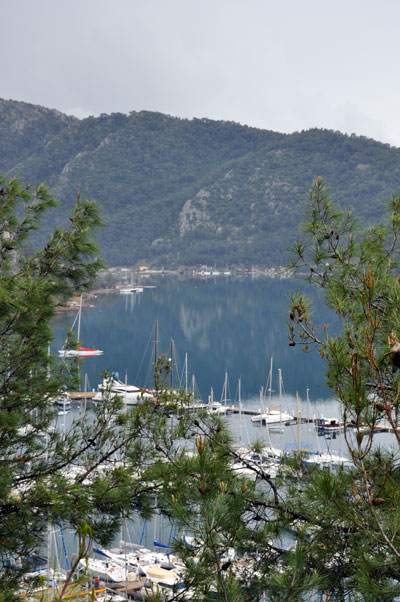 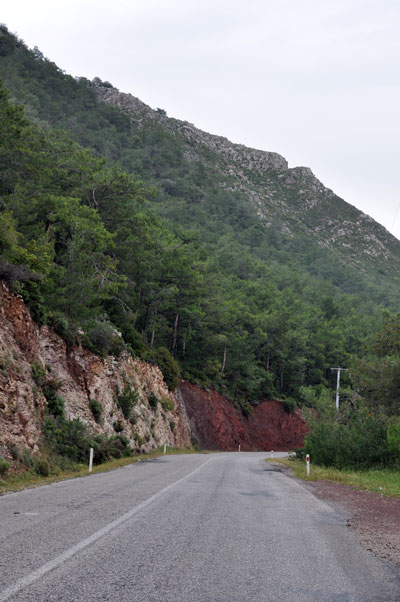 Orhaniye, Orhaniye bay, Orhaniye village, all refer to the Orhaniye, near Marmaris, Mugla. It is protected by strict government laws against the excesses of mass tourism, so it is under developed with no high rise developments. The Bozburun peninsula is at the point where the Mediterranean sea meets the Aegean sea so Orhaniye village has a wonderful climate all year around. 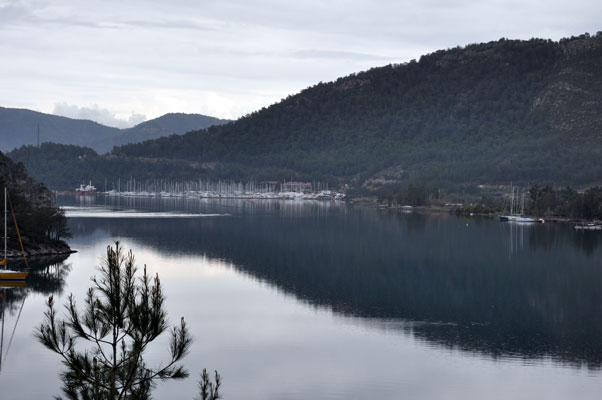 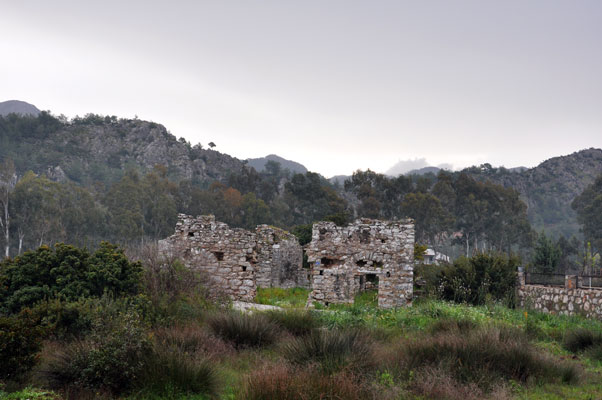 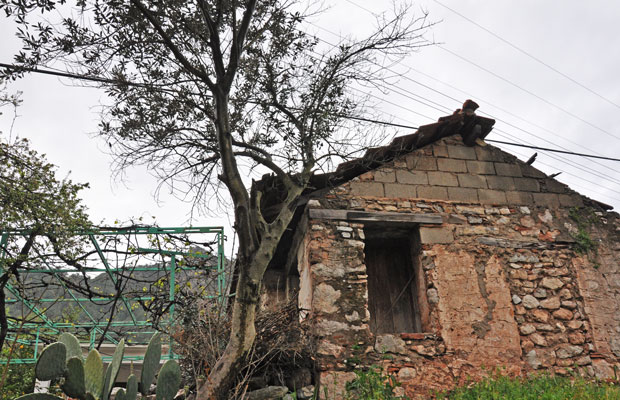 There is much to see in this area and the roads are fairly well maintained. We did take some of the smaller side roads which allowed us to see the above 'old ruins'.


All around Marmaris and its outlying areas are ruins of ancient cities and ramparts dating all the way back to the 4th century B.C 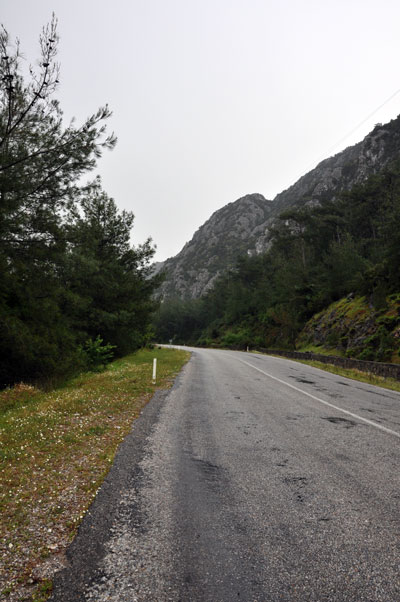 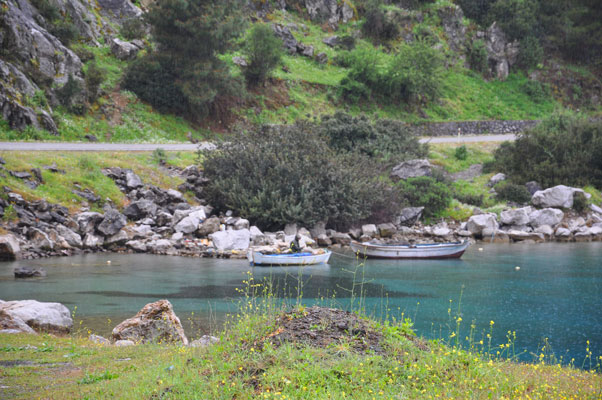 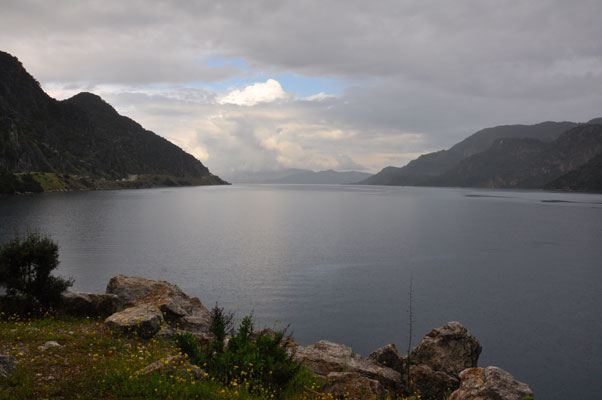 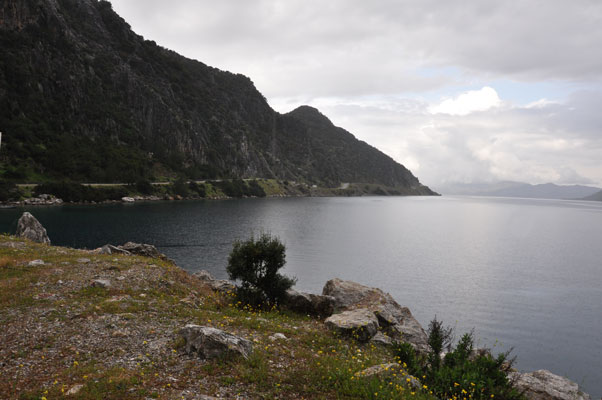 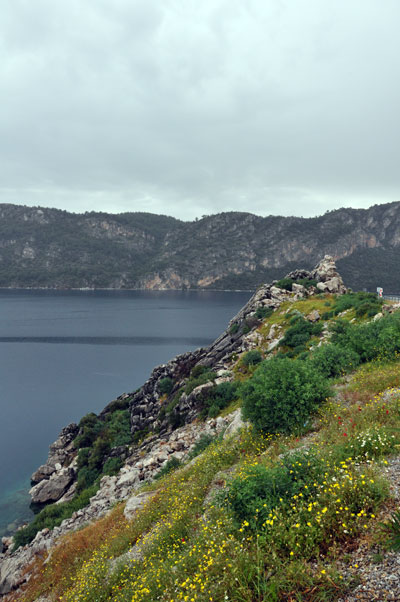 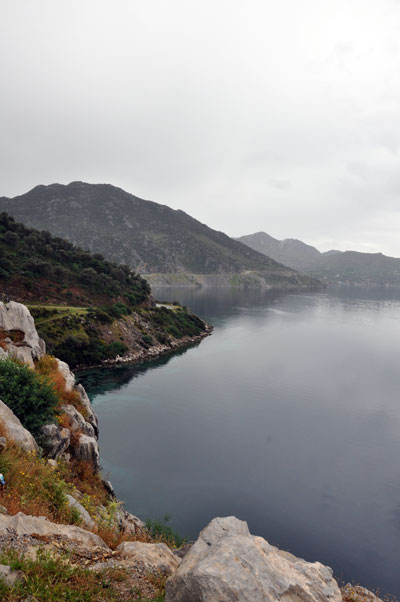 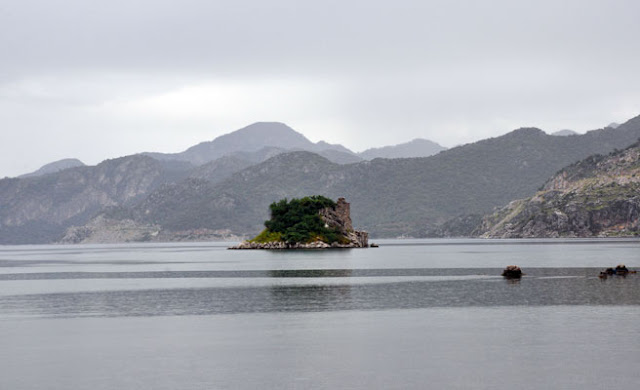 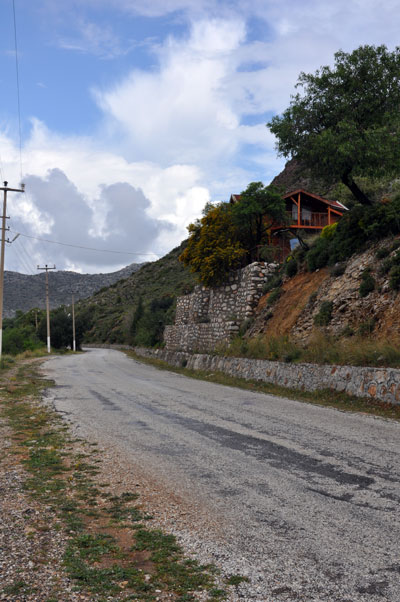 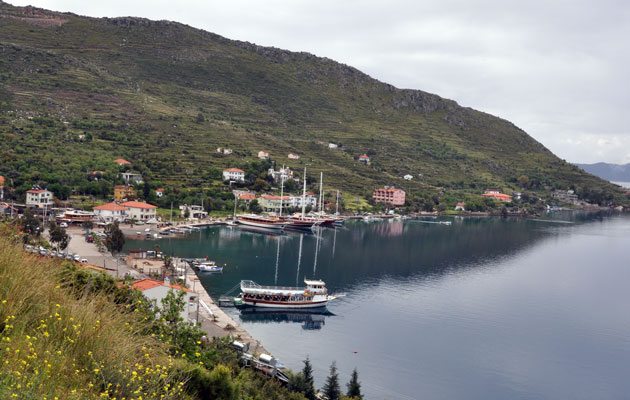 and as we reach Bozburan..... it is time to continue our journey towards Taslica.  Taslica is the last village on the Bozburun Peninsula that can be reached by car. Perched at the end of the Peninsula it enjoys fantastic panoramic views of the ocean that surrounds the village on three sides.

in the meantime, the blog post on
our arrival into Marmaris is HERE.