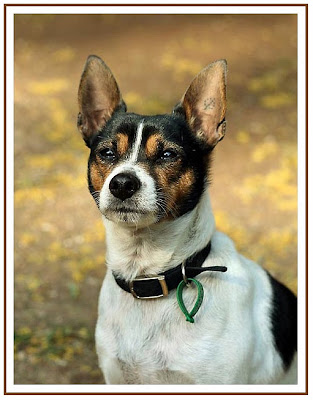 above: Janine took this image of Oscar on 7th Oct 2006


We lost a special friend today
the kind you can't replace,
and looking at his empty bed
We still can see his smiling face.

We see the endless energy
the sparkling puppy eyes,
Not the tired, fragile friend
we had to bid goodbye.

We know he's in a special place
our Lord has for such friends,
Where meadows, fields & flowers
help make them strong and whole again.

We will remember how he'd run to us
to play his favorite puppy game,
And how his ears would perk right up
When he heard us call his name.
But as those precious years went by
And we all aged and grew,
we found him often slowing down
But we had still so much to do.

We have noticed in the recent times
His ears were not as sharp,
Where is that running ball of fur
The years have shown their mark.

He started sleeping next to us
Was this his special clue,
Because he felt the end was near
We certainly feel that it was very true

Our Oscar was a special boy
We know he gave his best,
But as we looked deep into his eyes
we knew it was the time for him to rest.

It will truly be a struggle
we don't know how we will face each day,
we have to let him go - we know
But in our hearts he'll always stay.

This special place our Lord has made
Health and strength, wait for him there,
So with our very special friend
we are sending all our prayers.

For we  know he's watching over us
and he'll be with us when we cry,
So with one more kiss on his beloved head
we told our darling boy
goodbye.
the above is very much the same I wrote out for Zac and also for Pokey. 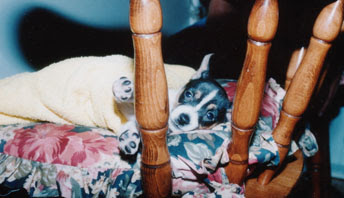 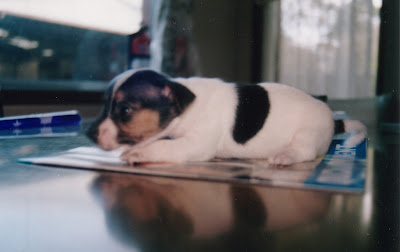 above: when Oscar was just a tiny little puppy

Then in March 1998, along came Oscar. But sadly 5 days after he and his 3 siblings were born, their mother – Sugar - passed away. Oscar was 55 grams in weight ....that is the weight of one medium sized egg!
These four little five day old puppies ......  what to do? Even the Vet said they would not survive.  But with the love and care devoted upon them, they survived ... each and everyone of them.

Yes, Oscar is a fighter, his true name is Sugar Ray Robinson (one of the great boxers of all time [1921-1989]) and as with all four puppies, they were named after a famous 'fighter'.

In 1999 both Pokey and Oscar were sterilized


In 2002 we took Oscar and Pokey on a 12 mths holiday traveling all over Australia. 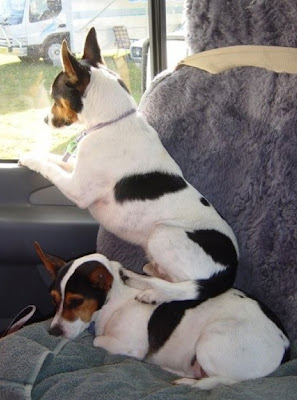 above: in 2002, he used Pokey when he needed some extra height  to see outside the motorhome

In 2005 he had an eye infection and had to have major surgery to have the lens replaced in his eye.

In 2007 both Pokey and Oscar flew to Singapore.
In 2009 he pulled one of his nails out when it caught in his collar, more surgery! 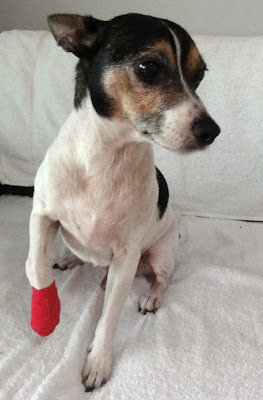 In 2011 he lost his brother Pokey on 7th July and he grieved more than we thought was possible.


Two weeks later we took him to the vet and he was diagnosed with Pituatary Dependent Hyperadrenocorticism. (Cushings Disease) and a month later they found he also had Congestive Heart Failure.
He started off on his medication twice a day, but over the past month it was increased to three times a day.
In December 2011 we applied for a permit for his re entry into Australia and this was declined due to his health and age.
We wrote a long letter to AQIS (Australian Quarantine) explaining a bit more about Oscar and that he was a fighter and that he would survive the flight, but could possible struggle with the 30 days of Quarantine. But we were willing to take the risk as we felt he would be OK.
30 minutes later, we rec'd the permit and he was allowed to return to Australia!

He left Singapore on 21st February 2012 and arrived the following morning at the AQIS station in Spotswood where he stayed for the full 30 days. 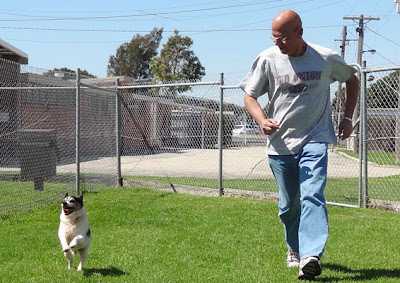 above: running around while in Quarantine at Spotswood. 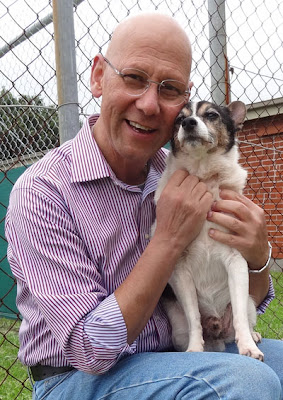 above: with John when he was in Quarantine

He was very happy to be back with us and settled in very well. We knew we wouldn't have him forever and the vet thought he might survive till mid April .... but we managed to have him for a full two months at home.
We brought him home to Ballan on 23 March. 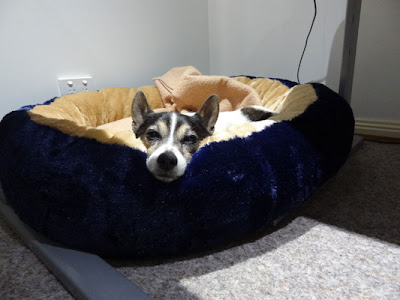 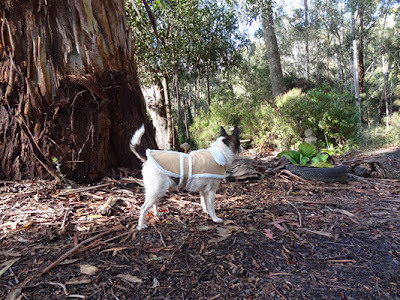 above: last month he got to go to Blackwood again where he used to chase lizards
with his brother Pokey.


One of his favourite things to do was "get in the car". It was such a novelty for him to be able to travel around and he loved it. The minute we picked up the keys, he was waiting at the front door!

On Sunday (20 May) he was chasing the Magpies outside, on Monday (21 May) he traveled with us in the car to Bendigo for the day. On Monday evening his breathing became erratic and through the course of the night we realised his time was coming to an end. 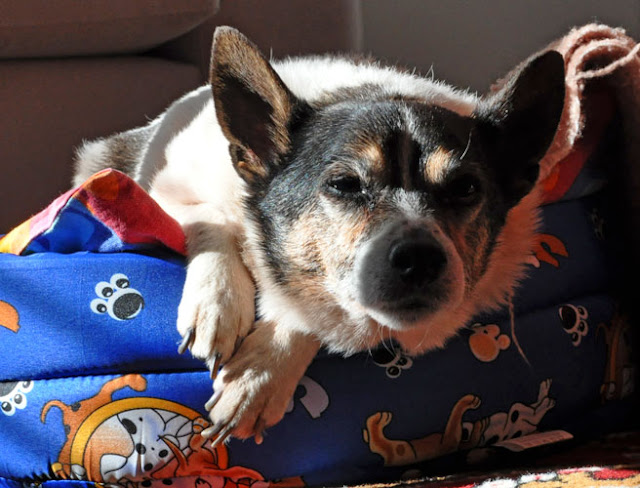 above: photo taken yesterday at 12 noon as he lay in the lounge room in the sunshine

Yesterday (22 May) he really struggled with his breathing, one minute hyperventilating and the next 'shallow breathing'. I was too selfish to take him to the vet after what we went though with Pokey, but at 3.15am this morning while I was nursing him in the lounge ..... I knew we had no choice but to call the vet as soon as we got up.


We took him back to bed with us and we held him till he closed his eyes at 6:10am this morning.
Letting him go was the hardest thing I have ever done in my life, unbearably difficult. He was my friend. A special friend I will never forget.  I know we were really lucky to have had him for so long, possibly more than his fair share of life expectancy. 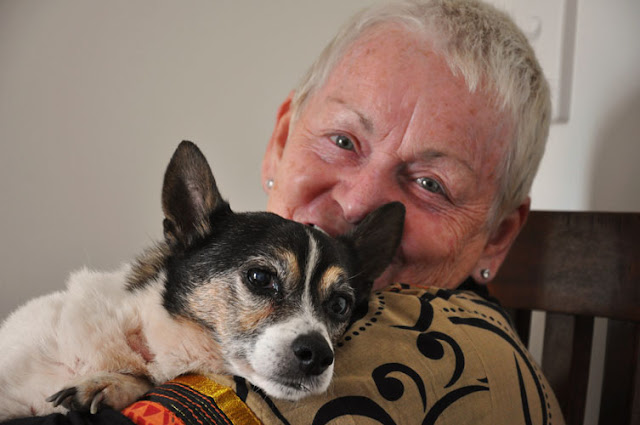 Rest in Peace Oscar
(Sugar Ray Robinson),
you fought the good fight right till the end.

we all loved you so much
you were one very special little dog
there will never be another like you.

I'm so sorry to hear of Oscar's passing Leone! He lived a great life and was lucky to have you guys as his owners.

At least he made the trip back to Australia so he could be with you guys for a little while. My heart goes out to you. <3

So sorry for your loss Leone! You have had such a beautiful journey with Oscar. My dog Romeo is in a similar point in his life. I dread the day when he is no more.

You write so very well Leone managing to encapsulate in a few words all that Oscar was and how much he meant to you. The poem is lovely. We are both in tears and feel your loss. Take care both and thank you for sharing at what is undoubtedly a very difficult time. Xxxx

Leone, I know we don't know each other, but I'm so sorry to hear of your loss. This post is beautiful. What a grand gesture to your sweetheart. I sit here remembering my two cats, both died less than a year apart and I had them for 18 and 19 years. What a loss! I can't wait to see them again one day...

I am so sorry to hear about your loss. I am so glad he had the chance to spend his last days with the people he loves most!!

I dread to think of when my two dogs leave me. :( But most importantly is you take them wherever you go, some people would have taken the easy route and left him behind!! :(

sorry to hear that, and we did not know Oscar was sick. Can deeply feel your Love for Oscar through your post.

I haven't visit your blog for a while. Sad to read about the passing of Oscar. Sorry for your loss of Oscar. The joy they give us is beyond words, as is the pain we feel when they leave us. RIP Oscar