Singapore: it's all about LRT MRT SMRT PIE BKE AYE

Singapore has the absolute best public transport system in the world, seriously. It is a shame that other countries (such as Australia) do not take note of how to do a job efficiently as they try to reinvent the wheel.  They just want to waste taxpayers money without looking at other countries and seeing what can be done with a little forethought.
I use the public transport system wherever I go ... it is fast, easy and very convenient. If I have been shopping or visiting friends and it is late, I sometimes use a cab to go home.
But where we live at Bukit Batok, it is so convenient as we are right beside the Bukit Batok MRT (rail station) we are also only 5 minutes walk to the Bus Interchange. These buses run all over the island and I never have to wait more than 15 mins during off peak. With the train system during peak time the trains run every 60 seconds ..... yes, that is every single minute! Then it eases off to every 3 minutes and during 'off peak' times the trains run every 6 minutes.
We cannot ask for a better service. 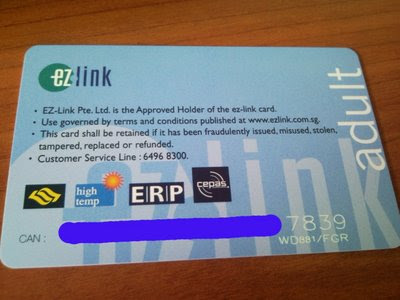 The ticket is also very simple. It is called the Ezi Link card, you tap it on the 'gate' on the way in and again on the way out ... your fare is deducted at that point. You top up the card at every rail station and some other outlets. It is a type of debit card and can be used for MacDonalds, car parking, bus, train and soon a few stores will accept the Ezi Link card for payment. 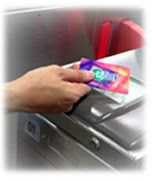 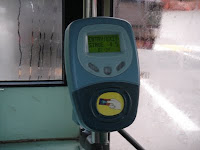 To use the Ezi Link card on the bus - you tap the card on the way in and just before you get off at your stop.
The MRT is available over most of the island and there are new lines being installed all the time. Where there is no MRT (train line) then there is the bus service or the LRT (Light Rail Train) which is an automated one carriage 'train' that runs from a MRT interchange station and out thru some of the more densly populated area's.
This first image shows where the MRT lines are situated .... we live on the RED LINE .... if I need to go to CHANGI AIRPORT I would take the train from Bukit Batok MRT to Jurong Interchange and change trains to go along the GREEN LINE to CHANGI AIRPORT ... this would take one hour and 10 mins and cost $1.82. If I took a cab to the airport at around mid afternoon it would take 35 minutes and cost $27.00.

This image here is one of the LRT lines. If I was visiting my friend Lesley, I would take the MRT to CHOA CHU KANG MRT (just two stops away) and then take the LRT to PENDING and walk about 200m. 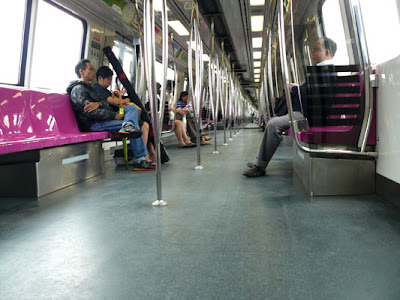 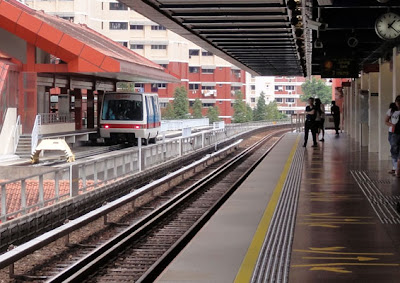 the above image is from the Choa Chu Kang MRT looking across to the LRT station. You can actually see the 'train' as it pulls into the station. We walk down under the MRT station to reach the LRT line.
If we took just the bus, it would take 38 minutes and cost 88cents. By taking the MRT and LRT it took 28 minutes and cost was $1.10.
The Choa Chu Kang MRT/LRT Station (NS4/BP1) is an interchange station serving the Choa Chu Kang area of Singapore. It is part of the North South Line and it is also the terminus of the Bukit Panjang LRT Line.

The station was opened on 10 February 1990. It used to be the terminus of the Branch Line before 10 February 1996. With the opening of the Woodlands extension, trains can run directly from the station beyond Yishun MRT Station, to Marina Bay MRT Station, and hence the branch line was incorporated into the North South Line from then on. Terminating facilities for Marina Bay-bound trains are still present.

The LRT station opened on 6 November 1999, on the opening day of the Bukit Panjang LRT line. 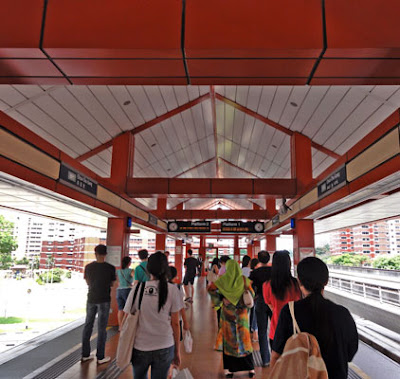 we waited on the LRT station for about 3 minutes for the train to arrive.
The Light Rail Transit (LRT), also known as the Light Rapid Transit, is the light rail component of Singapore's rail network, consisting of localised rail systems acting as feeder services to the Mass Rapid Transit network. The first LRT line was opened in 1999 and the system has since expanded to three lines, each serving a public housing estate.

The system is closer to an automated people mover system such as those found in many airports around the world than a traditional light rail system. All the lines are fully automated and elevated, and run on viaducts in order to save scarce land space in Singapore.

Although the Singapore Changi Airport Skytrain people mover and the Sentosa Express is relatively similar to the LRT, they are not part of the system.

Lines are constructed by the Land Transport Authority, with operating concessions currently handed to SMRT Corporation and SBS Transit

The trains on the LRT system are fitted with rubber tyres, rather than steel wheels, on specially-constructed guideways from which its power is also sourced. All cars are fully automated and driverless, and are controlled from their respective depots.

What I didn't realise at first was the windows change from clear - when at the station - to opaque when it is moving. This is to sop people feeling nauseous when traveling at heights along the lines. Very, very clever! 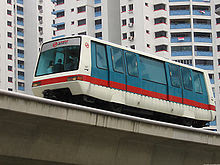 The following images were taken as we were in the train and going along the line .... you can see where it weaves in and around the buildings and some construction work as well. 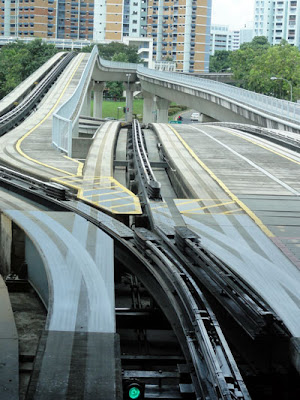 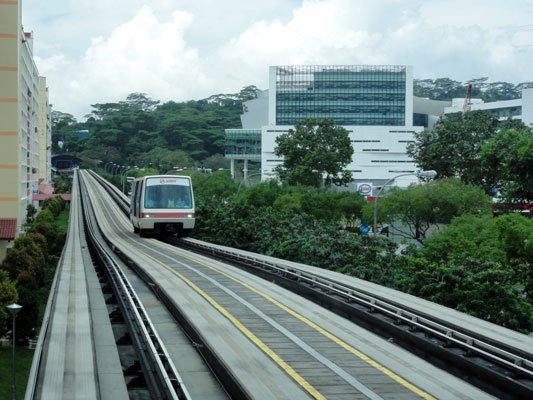 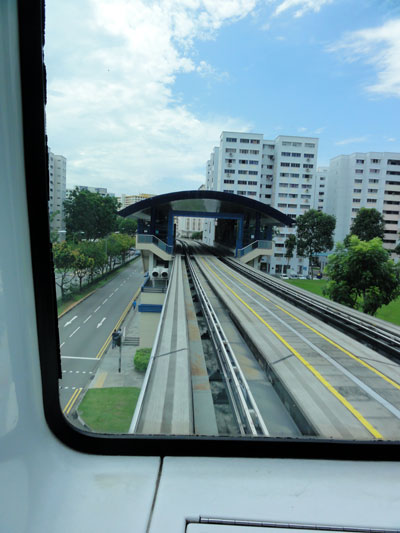 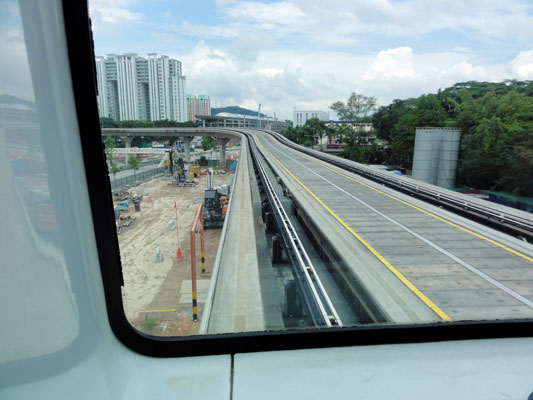 and then we arrive at our destination at PENDING LRT STATION. 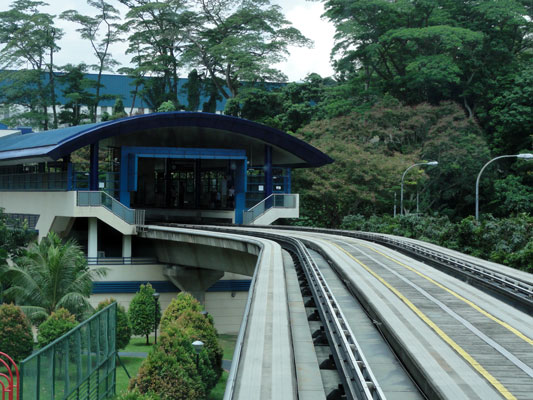 Pending LRT Station (BP8) (pronounced as pern ding) is an LRT station on the Bukit Panjang LRT Line in Singapore. It was opened in November 1999. It is operated by SMRT.
Well worth the experience to take a journey on one of these even if it is just to see how efficient Singapore is with it's amazing public transport system!
Click HERE to read about my blog posting of our recent trip on the new circle line!

I am the Content and Community Manager of Travelavenue.com, the new community travel guide.

Our editorial team has selected your blog for our program "Travelavenue favorite blog 2010".

Could you please give me your email? I will present you our program in details.