sharing an experience with friends

Sorry folks, a wee bit of an intermission here.
Need to take a break from Sundays Battle of Pasir Panjang Walk and blog about the CNY (Chinese New Year) Banquet we had last night. 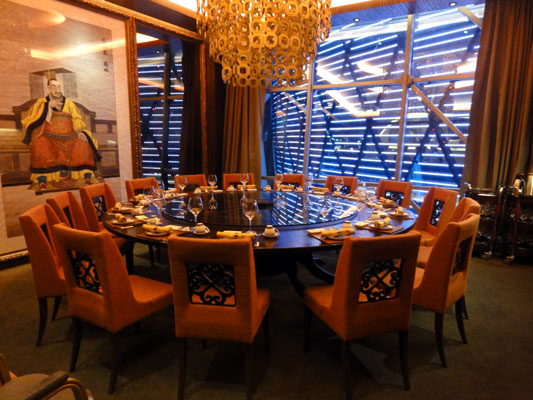 Chinese New Year is the longest and most important festivity in the Chinese Lunisolar Calendar.
Chinese New Year is an event that affects individuals all around the globe and the celebrations are very exotic and a lot of fun for everyone involved and one of the biggest and most popular aspects is the food. Chinese cuisine is loved the world over and on this day you can really appreciate the variety of foods available while reflecting on the year gone by and the year to come. 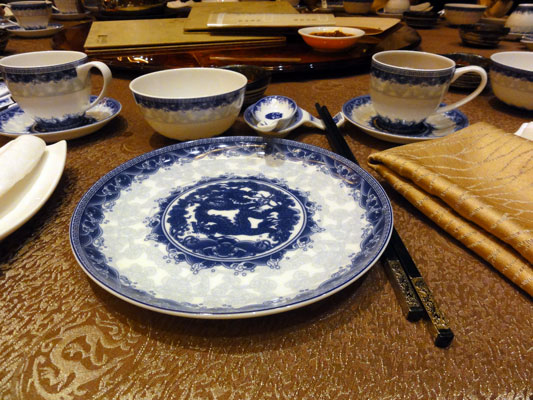 In traditional banquets like Chinese New Year each meal has their very own meaning and a definite reason for being prepared. Major themes include wealth, long life, prosperity and happiness. Finding fulfillment has never been easier!
Dumplings are believed to bring wealth within the coming year to those who eat them on this particular day. Of course wealth is a thing that several folks wish to accumulate so there are many paths to doing so. Other meals which might be symbolic of wealth on the Chinese New Season are bamboo shoots, black moss seaweed, egg rolls, and oranges. 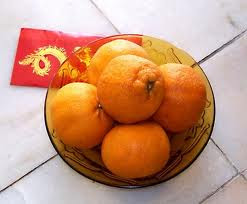 Longevity or long life is something else that the Chinese are very famous for. In a Chinese New Year Banquet, the secret to lengthy life is in consuming the correct meals including: noodles, Chinese garlic chives, and peanuts.
Prosperity is attributed to meals such as lettuce, whole fish, and pomelo (a large citrus fruit also known as Chinese grapefruit). In addition to prosperity whole fish and pomelo are believed to bring abundance and togetherness (as in marriage or romance) throughout the next twelve months.
Chicken may be the main course when aspiring to achieve happiness. In addition chicken is associated with marriage, particularly when served with meals such as lobster. On that note, for those planning for kids from the near future you might want to add eggs, seeds (such as watermelon seeds), and pomelo - the last two particularly if you would like more than one child. The latter two are presumably not encouraged in China.
Finally, if luck is what that you're most in need of try to add a tangerine or some seaweed to your plate on this unique day. If your run of luck has been genuinely bad you may want to double up on your servings of both.
But what we had last night is called Yusheng or Yee sang- Raw fish salad. Eating this salad is said to bring good luck. This dish is usually eaten on the seventh day of the New Year, but may also be eaten throughout the period. 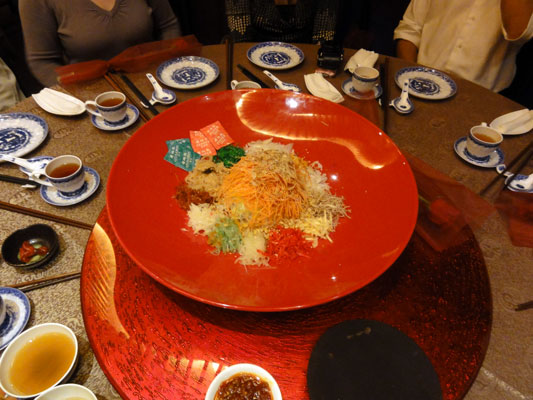 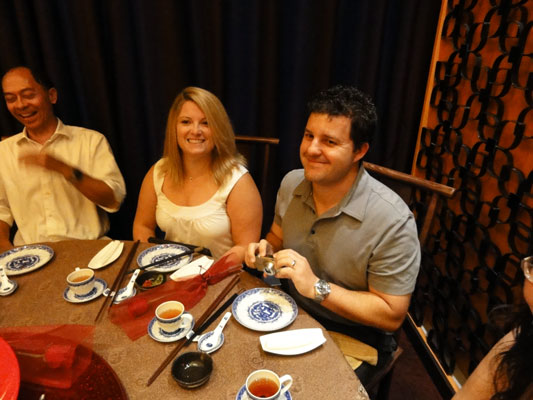 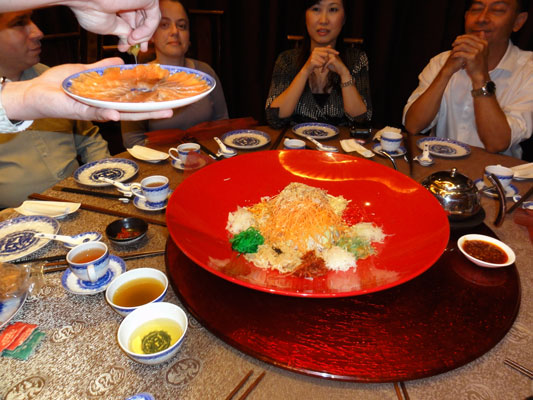 each seasoning or ingredient being added here to the dish has special significance.... 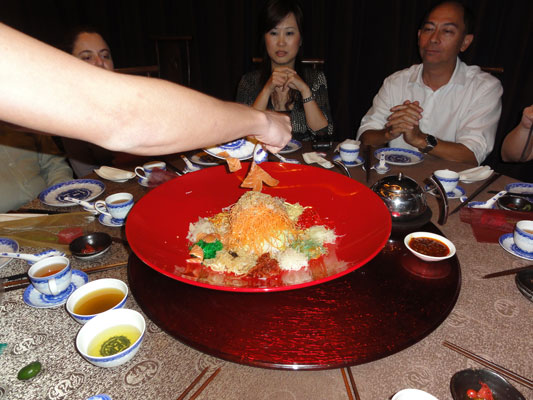 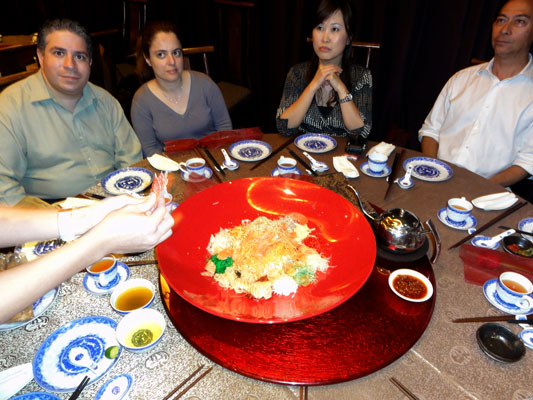 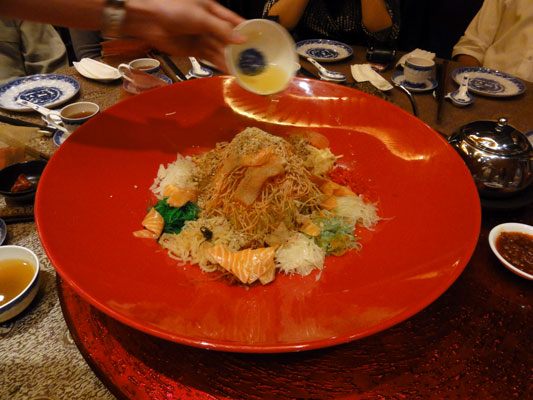 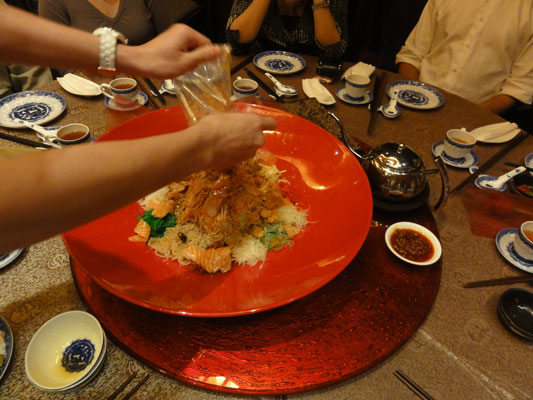 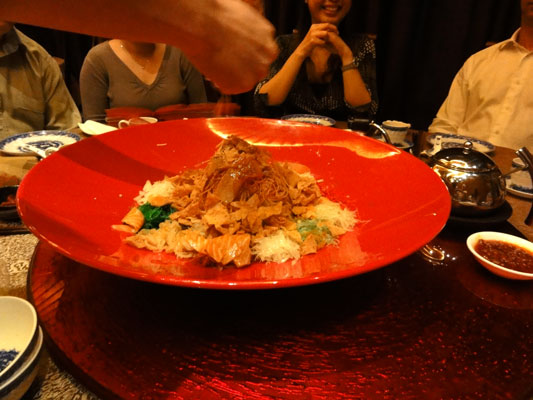 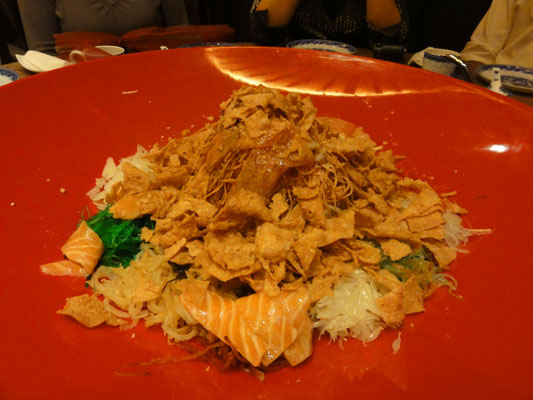 Yusheng, yee sang or yuu sahng or Prosperity Toss, also known as lo hei is a Teochew-style raw fishsalad. It usually consists of strips of raw fish (most commonly salmon), mixed with shredded vegetables and a variety of sauces and condiments, among other ingredients. Yusheng literally means "raw fish" but since fish is commonly conflated with its homophone abundance, Yúshēng is interpreted as a homophone for Yúshēng meaning an increase in abundance.
Therefore, yusheng is considered a symbol of abundance, prosperity and vigor.
While versions of it is thought to have existed in China, the contemporary version is created and popularised in Singapore in the 1960s amongst the ethnic Chinese community and its consumption has been associated with Chinese New Year festivities in Singapore as well as in neighbouring Malaysia. In Singapore, government, community and business leaders often take the lead in serving the dish as part of official functions during the festive period or in private celebrity dinners. Some have even suggested that it be named a national dish. 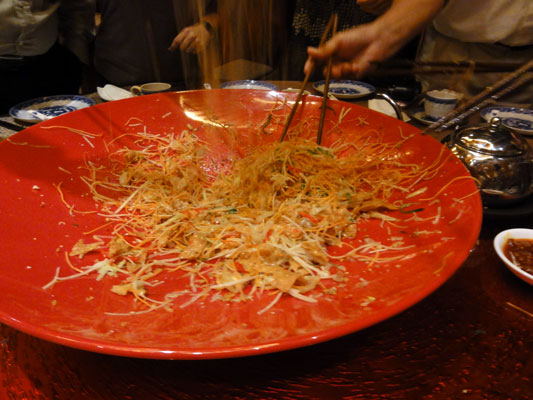 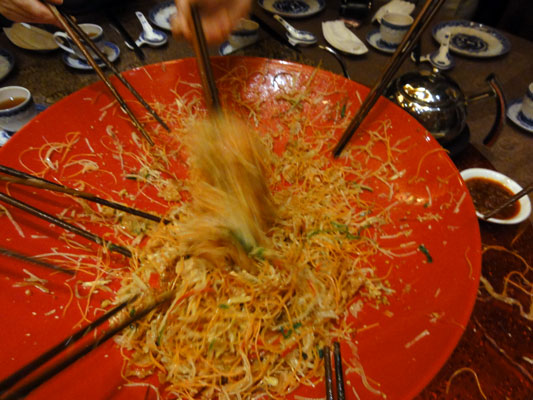 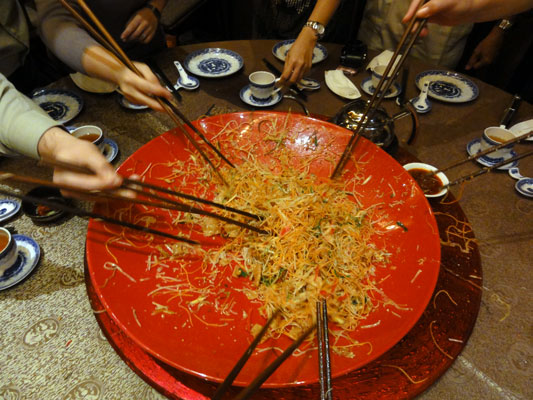 the end result on my plate was simply delicious! 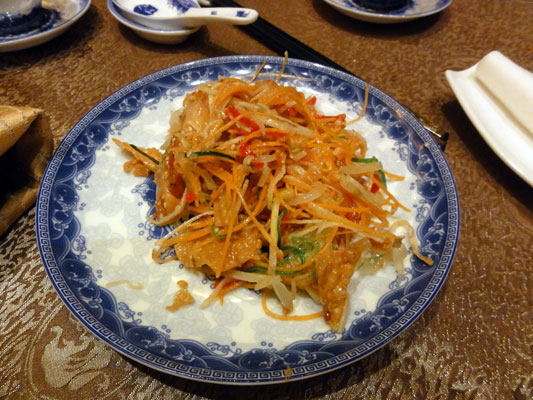 we had many other dishes throughout the meal and by the time we had finished we had eaten enough to last us a week! 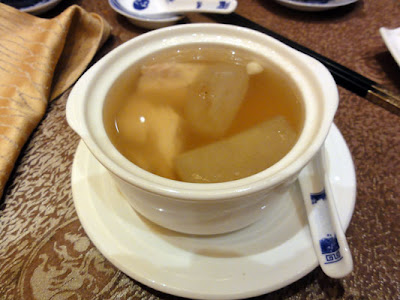 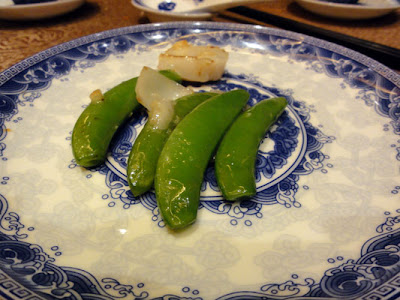 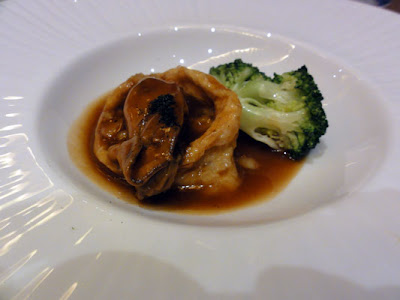 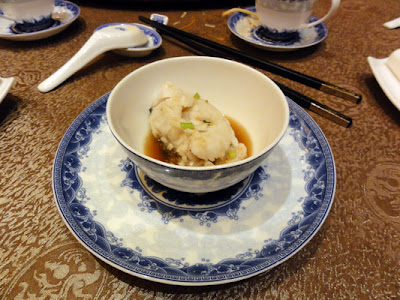 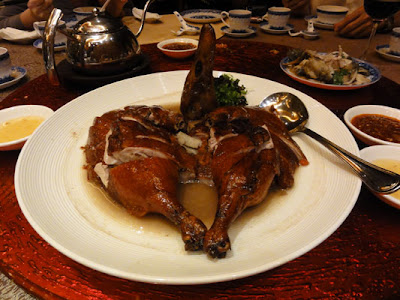 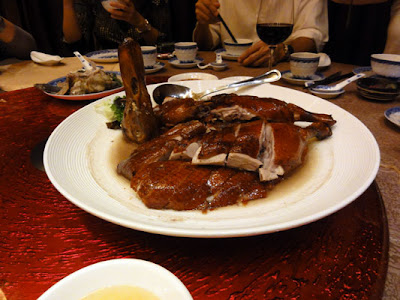 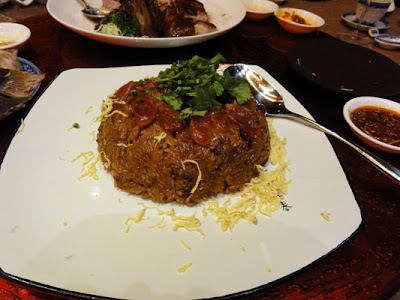 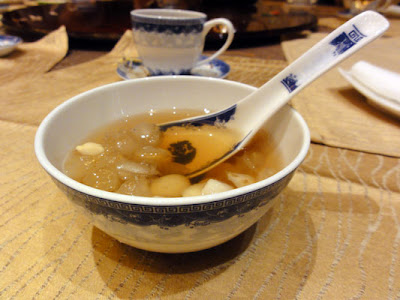 overall it was a fabulous experience shared with a few of our friends here in Singapore.
A meal that should be shared with friends every Chinese New Year, regardless of where you were born!

Being a local S'porean, i must say i still love this tradition of lo hei every year. It just feel odd that something is missing not to do it at least once in CNY.

Thouroughly enjoyed it this time with all the new found friends from overseas in such a nice setting in Taste Paradise :-)